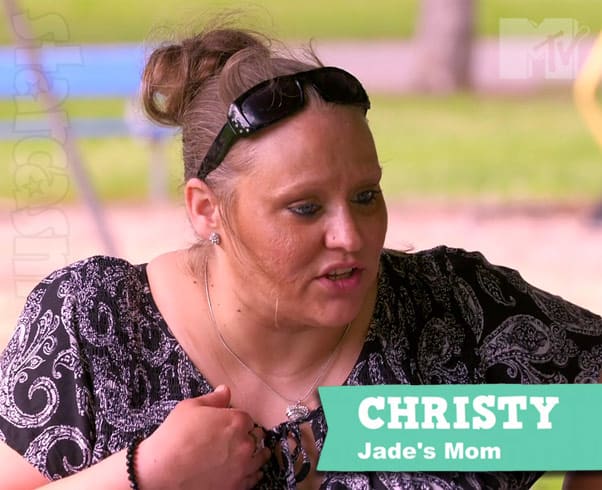 According to an affidavit obtained by Radar Online, Christy and Michael were waking up when officers arrived. The two stated they were “fine” before one of the officers then inquired as to whether or not there “was anything in the vehicle that Officer Anderson should know about.” Michael admitted to the officers that there was marijuana on the floor board, at which point he and Christy were asked to exit the vehicle and the two were read their Miranda Warnings.

The officers searched the vehicle and found the pot. But that was just the beginning.

Officer Anderson then searched the back seat of the passenger side and looked inside a duffle bag with male clothing inside,” the Affidavit read. “Officer Anderson pulled out a camo bag and Mr. Smith said, ‘Those are my knives.'” The officer then pulled out a small black container that contained weed residue, a one hit pipe, two other pipes, scissors, a larger pipe and cigarette paper, which Officer Anderson recognized to be used to roll marijuana, and a larger pipe.

A second officer on the scene searched Christy’s wallet and found a crystal-like substance that he suspected to be methamphetamine. “When Officer Gold pulled [a] piece of paper from the bag, Mrs. Smith said, ‘that is also meth.'”

In addition to the meth, officers also found a glass pipe with burn marks and a white residue as well as “orange pills wrapped in a plastic and black scale. Mrs. Smith said the pill was suboxone.”

The details from the affidavit certainly explain why Christy is still facing a meth possession charge while Michael is not. From our previous post:

Christy is currently facing three charges, including felony possession of meth. The other two charges are misdemeanors for possession of a controlled substance and possession of drug paraphernalia.

It appears that Michael was originally booked with the same three charges as Christy, plus a misdemeanor charge of marijuana possession. However, the felony meth possession charge is no longer listed on his court filing, so he only has the three misdemeanors pending.

In their previous appearances on Teen Mom: Young and Pregnant, Christy and Michael were essentially homeless and living out of a hotel room. It seems their situation has not changed as Christy told the court she is homeless and makes just $200 a week in her argument for receiving a public defender. The court granted her request.

Christy and Michael are scheduled to appear in court for a pretrial conference on July 10.

Newly announced #TeenMom2 star Jade Cline reveals that her mother Christy & stepdad Michael were recently arrested on drug charges. Get details on their arrests & watch Jade get emotional talking about the impact drugs have had on her mom over the years. https://t.co/XlnL7EUe1w

Jade’s Teen mom 2 co-star Kail Lowry mentioned the arrests during a Coffee Convos podcast that was featured as part of the recent Teen Mom 2 Reunion. (The segment was to officially announce that Jade would be leaving Young and Pregnant and joining Teen Mom 2 – link included in the above tweet.) During the emotional interview, Jade revealed that MTV cameras were rolling when she got the news that Christy and Michael had been arrested again, so I assume the arrests and the fallout will be a big part of her story line during her debut season on Teen Mom 2.