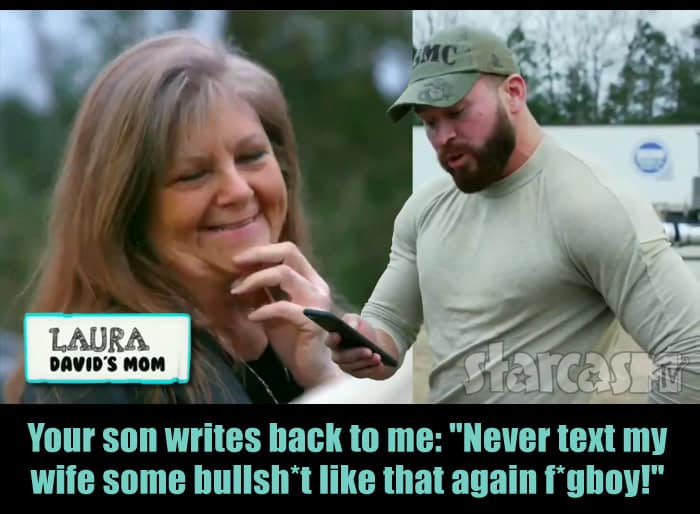 This week’s episode of Teen Mom 2 featured a dramastic scene between Jenelle Eason’s ex Nathan Griffith and Jenelle’s new mother-in-law Laura Eason during a Kaiser drop off. Laura was handling the exchange because Nathan and David had gotten into a heated text message battle, and Nathan wanted to confront Laura about her son’s actions. Nathan read a portion of the texts that David sent to him aloud to Laura, including one part where David referred to Nathan as a “f*gboy.”

After the episode aired, Nathan took to Twitter to reveal that he had asked MTV to “host a MMA fight” between the two, and he used David’s history of homophobia and transphobia to encourage the “#LBGTQ” community to start a fundraiser for this celebrity death match:

DAVID! I begged @mtv to host a mma fight for us and because of you they can’t now. Fighting words?!?!? Please, I would love to. I want a perfectly legal, conscience decision (on your part) and good fight.

I know if it’s in a ring, the moment you come at me… Imma clean that clock of yours and then maybe you can think straight! #LBGTQ I know you all would love to start a fundraiser to see this fight. And if you get it together, I know I’ll be there and show up to fight for y’all.

Devoted fans of all the off-screen Teen Mom 2 shenanigans will know that Nathan trained to be an MMA fighter, and actually had a match back in 2013. That match did not go well for Nathan, but I think I would still put my money on him if there is ever a Thunderdome match between him and David.

Just for fun, here is a little flashback tweet from Jenelle promoting Nathan’s fight and a photo of Nathan at the conclusion of the bout:

OMG yes ! My baby is about to fighhhhht !!!!!! @GroundLevelUp everyone wish him good luck !!!! 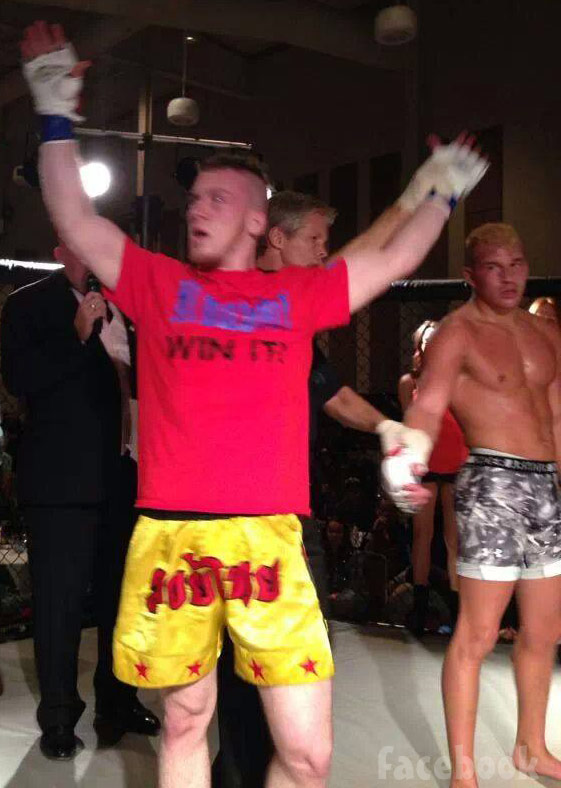 Meanwhile, viewers were a bit taken aback by the fact that David’s moms Laura openly laughed when Nathan read the “f*gboy” slur. David’s estranged sister Jessica Eason took to Twitter to explain that their mother’s reaction was more from awkwardness than anything else, given that she does not often film and she was put in a difficult position handling Kaiser’s exchange in the middle of all the drama.

Here is what Jessica had to say in response to a tweet including the clip:

They meet right down from my house.. Mama is there for them when they need her. Obviously those 2 morons had mama meet him so they didnt have to. Mama does not get in the middle of any of the drama if she can help it. She cries a lot about it bc she wants peace w/ everyone.

I think the “giggle” was an uncomfortable reaction to Nathan reading David’s messages to her, bc she doesn’t like discussing any of this. If she has something to say about David’s behavior, she’ll talk to him about it. She gets pulled many directions, and she gets so upset.

Mama just isnt the one to discuss this with.. she isn’t going to discuss anything like that w him.. I understand Nathan trying to show Mama what he’s dealing w/ but David and his b**** are gonna stay immature, and Mama cant do ANYTHING to change how they act, unfortunately..

It’s a shame that they can’t even keep their childish mouths shut long enough to let Kaiser see them getting along and having peaceful meetings. Mama does way too much to help those idiots, and that’s why I can barely even speak to Mama right now.. I sick of it!

Here is the actual scene, including the part where a very frustrated Nathan exits by declaring: “They need to get off drugs, that’s what they need to do.”

UPDATE – Nathan’s girlfriend Ashley Lanhardt responded to our story on Twitter in defense of Nathan’s motivations for speaking with David’s mother and for sending Jenelle an email:

Since everyone wants to put their two sense in, the reason Nathan reached out to his mother was bc he wanted her to try and talk to him. Considering he talks to Nathan like trash & he’s not “allowed” to talk to his ex. Nate was reaching in any direction he could for help.

That was the first time time I ever officially agreed to filmed and I was caught completely off guard. I was so disgusted with how people enable negative actions I felt the need to be the voice of reason. I was nervous too…

He asked for my advice before he sent her that message, I thought it was very humble and kind of him to reach out considering she’s the mother of his child. At no point when he was writing that message did he have any intent on trying to get her back.

All of the drama starts when Jenelle receives a text from Nathan after seeing online reports that Jenelle and David may have split. Jenelle says that she was focussing on her upcoming makeup line, so she changed up her Facebook “About Me” section — including the deletion of her marital status. In addition, she swapped out her profile picture to one that did not include David. She tells her gal pal Jamie that this is all it took for the media to run a bunch of stories about a potential split.

I am the first to admit that us folks in the media (some more than others) have a tendency to overblow minor things, especially any sort of change to a Facebook relationship status, but there was a little more at play here. In addition to Jenelle’s changes, David changed his relationship status on Facebook from “Married” to “It’s Complicated” before deleting his profile altogether. That seems more than enough to merit a speculative article (like ours) — especially when it is about someone with such a volatile relationship history!

Anyways, after seeing the articles online, Nathan sends a text message to Jenelle that she reads excerpts from. Jenelle is angry as she focuses on Nathan’s obsession with David and her. She also complains that Kaiser is not Nathan’s priority.

MTV briefly showed an extended excerpt from Nathan’s text on Jenelle’s phone, and I’d like to think that I am not biased when I say that it comes across as polite and genuinely concerned without being creepy or tinged by a lack of concern for Kaiser. Here is the full excerpt from Jenelle’s phone with a few minor edits that do not impact the meaning:

…weekend. Also. I hate the fact that people tell me everything. I honestly don’t care and its really none of my business. But whatever is going on i just want you and kaiser to be happy. That’s my upmost priority. You and David are married, you’ve been together for over two years now. You both have everything you want plus each other. Just know we all go through our ups and downs in relationships and I’m sure y’all will figure it out. Stay positive and level headed. You both got these little monsters that look up to you. I’ve never been bitter, I’ve been upset because I lust want everyone to get along and coparent. I know it sucks being in the public eye sometimes but remember like I told you, sometimes it’s ok to stay a little private. Everyone and their brothers and sisters say all this about yours and David relationship but I’ve never seen you so calm and in a shell. You guys make a good couple Alright I’m done rambling. If you…

Jenelle explains that Nathan’s message angered David and he and Nathan later “got into a big argument over text,” including the one in which David reportedly called Nathan a “f*gboy.” That led Jenelle and Nathan to ask that David’s mom Laura handle Kaiser’s drop off, and the rest plays out on screen.

Meanwhile, Jenelle has been uncharacteristically quiet about this week’s episode on social media. About all we got from her was a tweet suggesting that Nathan’s text was looking for a second chance:

“I like texts from my exs when they want a second chance…” ???

Unless there is some woo pitchin’ in Nathan’s text that wasn’t included in what was shown on Jenelle’s phone, I just don’t get the “second chance” thing at all. Apparently, Nathan doesn’t either:

JENELLE! Get over yourself! I talk the same way to my ex wife. It does not mean I want you back. Once again, I have a child with you. I ask all the time about kaiser. It’s you that stalks and harass my left then text me the next day about something totally irrelevant to kaiser.

Remember, I broke up with you three times for another girl. The last time is when you were calling in Puerto Rico begging/crying for me back and I said you’ll never change. #youwish #lookatme #lookatyou #alwaysupgrade #hollywoodisdead

The “f*gboy” scene has many wondering if we are getting close to the scenes after David’s infamous homophobic and transphobic Twitter rants that eventually leads to his firing from the show. The brief synopsis for next week’s episode only states: “Jenelle takes a birthday vacation with all her children.” I suppose we will all have to tune in Monday night at 9/8c to find out!