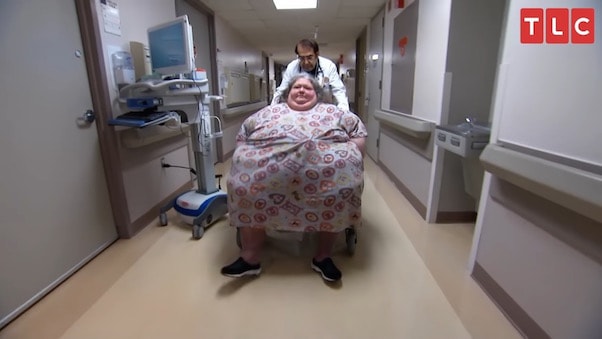 The first My 600 Lb Life Season 8 trailer is here — and we’ve got some early info on a few new cast members ahead of the show’s return. In a theme the show has visited several times before, it looks like at least one member of the My 600 Lb Life Season 8 cast is a plus-size model; additionally, at least one episode will feature a pair of siblings. And we can confirm right up front that, contrary to popular rumor, Dr. Nowzaradan has *not* chosen to retire. (At least, not yet.)

First, though, here’s the trailer itself. Somehow, this all-too-brief sneak peek feels…different from teaser trailers the last few seasons? It seems like the producers have found a way to ratchet up the tension despite the new cast’s voiceover clips saying essentially the same thing they always do. The first thing we hear in the trailer — “In the morning, I wake up, and…I’m disappointed that I’m alive” — is an unfortunate refrain for the entire show. So is “Losing weight is impossible, because food’s like a drug to me.” And “My body is betraying me.” And so are the tear-stained faces of loved ones telling their morbidly obese relatives “I need you to do this. If not, then I don’t know how long you’re gonna be here.”

Again, though, this isn’t a complaint. All the beats in the My 600 Lb Life Season 8 trailer feel simultaneously familiar and shocking. Maybe it’s just been too long since I’ve seen one?

Without further ado — the trailer itself:

OK, there is one huge difference worth pointing out: when was the last time we saw an outburst like the one from the man thrusting Lindsey’s hidden potato chips in her face? “Eat death, Lindsey!” has already become a meme among fans of the show on social media; I’d expect to see plenty more from that scene in particular whenever Lindsey (Lindsay?)’s episode airs.

Also of note: the My 600 Lb Life Season 8 cast member responsible for the 892.2 pound reading on the scale at Dr. Now’s office will be the second-heaviest person ever featured on the show. (The heaviest was the late Sean Milliken, who at one point on his weight loss journey weighed 1,003 pounds.)

We’ll have more extensive updates on the complete cast as their episodes air. For now, we can say that it appears one of the cast members currently works as a plus-size and food fetish model, something My 600 Lb Life has a little experience with. (Season 6’s Renee Biran and Season 2’s Pauline Potter both made headlines for their modeling before appearing on the show.)

We’ve also found out that there will be at least one sibling set among the new episodes. Weight loss pairs have become more and more common on My 600 Lb Life over the past few seasons; though the Assanti Brothers remain the most infamous, Brandi and Kandi Dreier have had plenty of weight loss success, as have David and Benji Bolton. And of course the Perrios from One Ton Family and both the Andersons and the Kings from Family By The Ton have helped usher in an ever-growing list of My 600 Lb Life-related spinoffs.

But when does My 600 Lb Life Season 8 come on? TLC is keeping with its tradition of debuting the new season of the show the first Wednesday in January. You can watch the Season 8 premiere on New Year’s night at 8 PM — and possibly earlier on the TLC Go app, if the network decides to repeat its Season 7 gameplan.