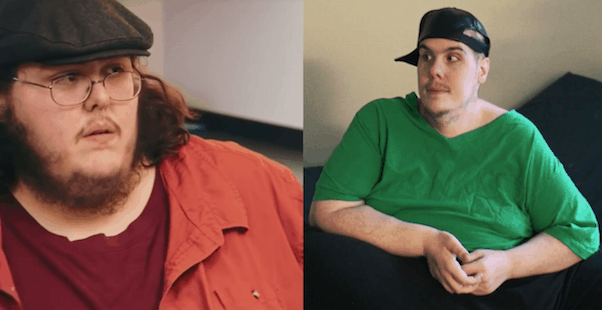 It’s maybe the most infamous question in My 600 Lb Life history: Where are the Assanti Brothers now? Their just-aired fourth episode was billed as the end\ of their story, but Justin apparently has other ideas. He recently used an impromptu Q&A as a chance to share more secrets about the show — and to clear up one still-standing rumor about his brother Steven.

In case you’re wondering what we mean by “more secrets,” recall that earlier this summer Starcasm broke the story of Justin accusing Megalomedia, My 600 Lb Life‘s production company, of blackmail and manipulation during filming for the Assantis’ fourth episode. Among Justin’s claims was that one of the show’s producers got fired when she wouldn’t take advantage of him during a vulnerable moment:

A very good person and producer was fired because she refused to trigger my PTSD during a sit in with Dr. Paradise. they even blackmailed me into filming the new scenes in 2018 saying they would release what they wanted and cut together some scenes, and not pay me to lowly $1500 Talent fee.

what you see on TV isn’t real so get your heads out of the sand.

(Though Justin deleted his original comment, you can see a screencapped version of it here.)

Since Justin and Steven’s most recent episode aired, Justin has taken to reddit several times to answer fan questions and clarify a few things about the last chapter in the brothers’ story. One of the biggest questions viewers had about Where Are The Assanti Brothers now Pt. 4 was the combination of Justin and Steven’s follow-up appointments with Dr. Now. Justin had already made clear that he wanted to be around Steven as little as possible, and the dominant speculation was that Steven Assanti Sr. simply decided it would be easier to do both appointments at the same time, and to only let Justin know about the change at the last minute.

However, according to Justin, the production company combined his and Steven’s appointments intentionally. And Justin further accused Dr. Nowzaradan of going along with the change despite the brothers’ history of conflict and Justin’s desire to be as far away from Steven as possible.

“Dr. Now knew that his production team was forcing it and still allowed it,” Justin said. Then, in an echo of his claim about the field producer above, he added, “What you see on TV isn’t the reality of the situation.”

In a separate comment thread, one devoted to discussing the role Justin’s father had in pushing the brothers together, Justin said that the decisions were “75% producer 25% father.” But when someone reminded Justin that he “hit [his] senior citizen father on TV,” Justin explained that he and Steven Sr. have a very complicated relationship:

behind the scenes, our day to day life isn’t like father and son, he greets me with “good morning asshole” as a joke. we are a functional dysfunctional family. its just how we have always been.

i watch his health and watching him slowly forget things and it does hurt seeing it. it upsets him when he forgets. i will always be here for him because he is the one that saved my life a couple times, once from death.

we may not show it but we love each other, so do not trust what you see on tv. whenever steven is involved, it brings out the worst in each other.

And speaking of Steven, Justin reaffirmed that he’s been “enjoying life away from” his controversial brother. Aware of the fact that he frequently reminds fans to “not trust” what they see on the finished My 600 Lb Life episode, Justin went out of his way to add that Steven Assanti is an exception to that particular rule.

“Steven on the show is Steven in real life,” he said. “It’s one of the few things not scripted.”

Finally, Justin shared the horrifying reason why he hates his mother, Gina, who abandoned he and Steven when Justin was just a boy. Justin explained that the childhood abuse related to his mother is intensely emotional as well as physical, and that Gina both enabled the latter and enacted the former:

Gina was aware of the abuse but she was busy going to clubs and getting drunk everynight. she would bring guys home that would beat the crap out of me plus i had steven beating my everyday. after she left she tried to get back into my life but i wasn’t having it. when i was 13 she told me to my face that i was a mistake and that i shouldn’t ever have been born. i was unwanted. so yes there is a reason i hate her.

Another fan asked why, after their mother abandoned them, Justin and Steven didn’t just go to live with their father. According to Justin, he was “8/9 and john [Steven] was 15/16 when our father discovered she had abandoned” her boys. When a third person asked if Justin was saying he lived in a home with no adult between his mother’s abandonment and his father’s discovery, Justin confirmed the awful truth: “Yes, [we were alone] until our father came over and found out.”

“The Assanti Brothers Part Four,” Steven and Justin’s most recent Where Are They Now? episode, is now available for streaming via the show’s official site.

(Photo credits: Where are the Assanti Brothers now via TLC)

PHOTOS Diana Bunch, radiant as ever, checks in with a new My 600 Lb Life update