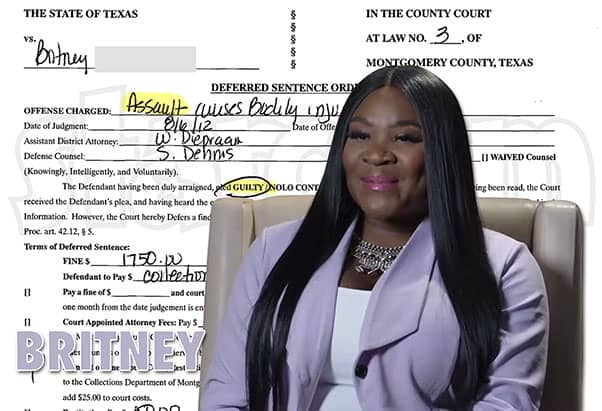 Love After Lockup’s Britney shocked her family by revealing she had been dating an incarcerated prisoner for nine months. But it turns out that Britney’s prison bae Ray isn’t the only one who has spent some time behind bars!

According to court records, Britney was charged with assault in November of 2011 after she “caused bodily injury” to another woman “by striking her with her hand.” Unfortunately, the criminal complaint did not include any further details about the incident. I have also been unable to locate Britney’s mug shot photo.

The case dragged on for more than eight months before Britney eventually pleaded guilty to the misdemeanor assault charge in August. She was given a deferred sentence and placed on six months probation. She was ordered to complete 100 hours of community service, submit to an anger management evaluation, and write an apology to the woman she struck.

In addition, Britney was ordered to pay $2,237 for restitution, court cost, fine, Crime Stoppers and court appointed attorney fees. The restitution amount includes $250 to be paid to the assault victim. Britney requested an extension for payment, and it was arranged for her to pay $373 every two weeks with a final payment of $397.

Britney followed through on all of her requirements and had the charge dismissed in February of 2013. From the filing: “The defendant in the above cause, having completed the period of community supervision without the Court proceeding to an adjudication of guilt, the Court hereby ORDERS the proceedings against the defendant dismissed and the defendant hereby discharged.”

If Britney shares any details about her arrest and the assault, we will be sure to update! (Something tells me she won’t be able to resist.)

UPDATE – Britney responded to our Instagram post about this article with a sense of humor. “Whewwwwwwww lawwwd!” she wrote. “Y’all done found the Montgomery county files 😮😮😮😮😮”

UPDATE – Britney did an interview with Dominick Nati about six weeks after we broke the news, and he brought up the assault arrest. Here’s what Britney had to say:

I did go to jail one time. It was actually a bar fight…I’m not really with the sh*t. Some things got out of hand, somebody got slapped, and the wrong person got their glasses knocked off of them. So, you know, I had to go to jail that night. Probably should have just been a public intoxication charge, but I was talking too much sh*t to the police, which is ridiculous. So I went to jail.

#LoveAfterLockup #SPOILERS Are Britney and Ray still together? PLUS, check out Britney's past commentary on several reality TV shows including calling Love After Lockup "ratchet" and #90DayFiance star Chantel "fake bouje and dusty!" https://t.co/KJV06HWRXR pic.twitter.com/U5fQz3UqB5

New #LoveAfterLockup convict Ray was part of a multi-state #Walgreens burglary ring back before stealing from Walgreens was a trending topic! Get all the details on Ray's arrests, and see his rather unfortunate choice of mug shot attire. #ChampionsHustle https://t.co/jzHXbBUymi pic.twitter.com/fe1dXQQNdd

#LoveAfterLockup Is Stan Smith actually rich? Here's all the info we were able to find out! https://t.co/wWaQzUujcM (No real spoilers) #BigLotsHughHefner pic.twitter.com/NvcV29Jlo6

LOVE AFTER LOCKUP Marcelino says Lizzie ‘repulses’ him, Michael ‘has a lot of growing up to do’