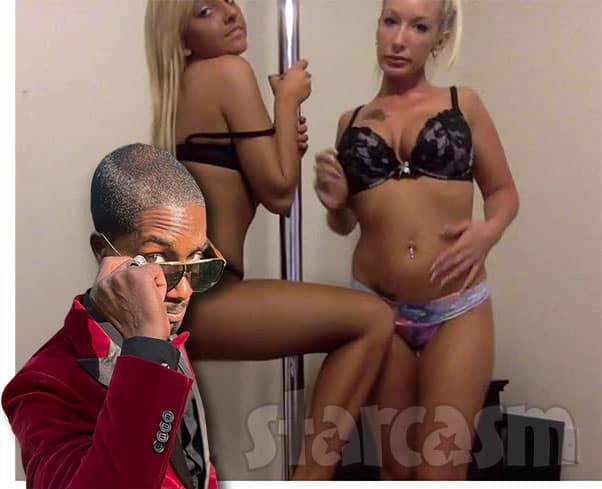 Love After Lockup fans are well aware of the love triangle between Lacey Whitlow, Shane Whitlow and John Slater. But fans may not be aware that Lacey is actually in a Love After Lockup love square because she made numerous adult videos with current star Nicolle Bradley!

I was first made aware of the connection between Lacey and Nicolle when I was researching the current cast and ran across this tweet by Nicolle from June of 2016: “My boo @Kaci_Kash got her ass done && it looks great 😚😍 now it’s MY turn @TheRealDrMiami, never had plastic surgery but I want it all 😋💋.”

As we were the first to report, Lacey’s adult film and cam girl alias is Kaci Kash. She had a BBL done by Dr. Miami and was later quoted in a 2016 E! News article about the controversial SnapChat plastic surgeon. Kaci sang Dr. Miami’s praises to E! News, but she later suffered butt buyer’s remorse. “I’ve had a FAILED BBL by Dr. Miami and the fat literally melted away,” Lacey revealed in an online butt implant forum. She was explaining why she wanted to get new implants despite having recently had a BBL.

After discovering Nicolle’s tweet mentioning her “boo” Lacey, it occurred to me that both women live in the Virginia Beach area. Perhaps their friendship was something more than online interactions? For the second time in the last few years I found myself wading through dozens of Lacey’s old cam girl videos looking for one that included Nicolle.

Lacey made lots of videos with other women, but none of them were named Nicolle or Nikki or anything similar. However, she did make numerous videos with a young blonde girl named Molly who looks a lot like Nicolle. Despite the heavy pixelation on may of the videos, it was still easy to confirm that Molly and Nicolle are the same person thanks to Nicolle’s numerous tattoos.

Nicolle has a large flower tattoo on one arm, a small cross on her hand, another cross under a bicep, and “Loyalty” spelled out with a kiss on one of her forearms. Here are some of Nicolle’s tattoos and a few SFW screen grabs of Molly’s tattoos — which were exceedingly difficult to get given the video quality and the fact that her videos with Kaci had all kinds of not SFW things everywhere! 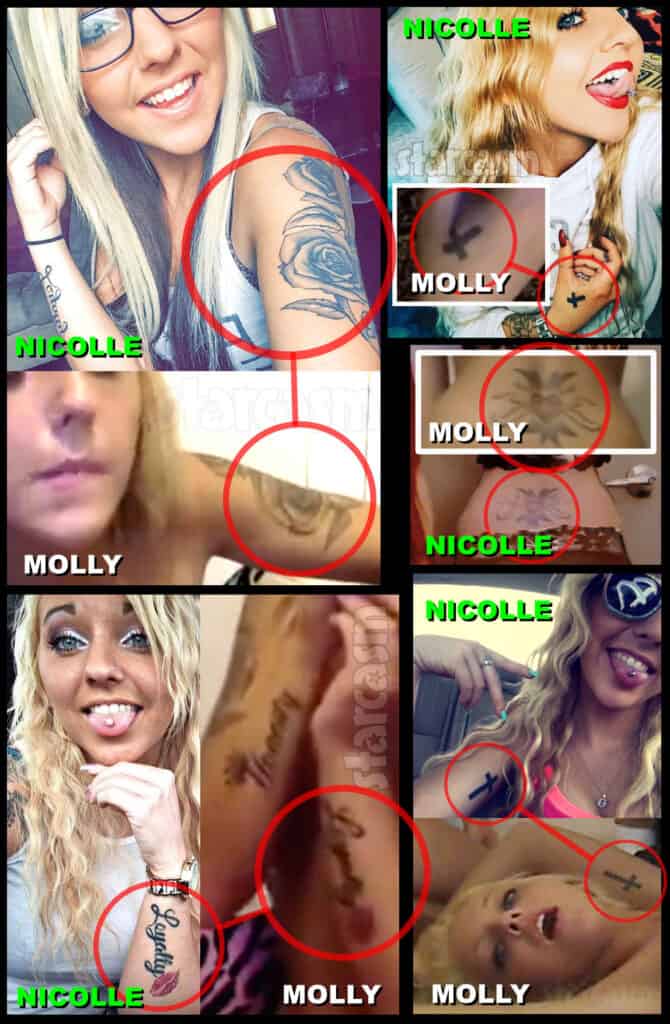 The smoking gun would have to be Nicolle’s rather large “Respect” tattoo on her abdomen. It’s a smoking gun not just because it is an obvious match, but also because of the timing. According to Nicolle’s Instagram, she got the ink in April of 2016, which was right in the middle of her string of videos with Lacey. Here’s her fresh ink with a screen cap from one of the Kaci and Molly videos: 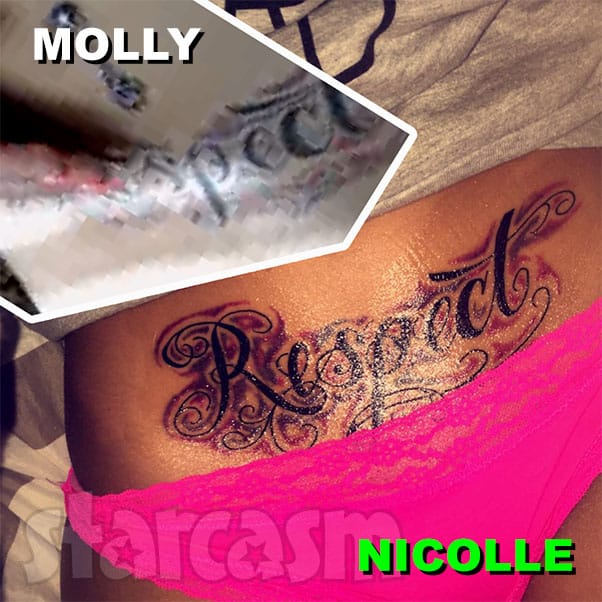 If you go down the rabbit hole of Kaci and Molly videos you will notice that Molly has the “Respect” tattoo in some of the clips and not in others. How do we know that April of 2016 was during the time that Molly was making videos with Lacey? Because of Lacey’s Twitter timeline. Here are some samples of Lacey’s tweets from 2016 in which she was heavily promoting her streams with Molly:

March 24, 2016
Great time with Molly today thank you to all my fans who came thru and showed love & support 😘

Apr 21, 2016
Camming with Molly today see y’all around 1pm est or shortly after

July 1, 2016
send offline tip of 100 tokens and get 3 date raffle tickets to meet me and molly in vegas this august!

July 1, 2016
live drawing will be July 24 all paid for by me! 2 nights at the @Bellagio suite with molly and me! just bring yourself & lets party!

Unfortunately, Lacey and Nicolle’s planned trip to Vegas ran into a hitch when Nicolle was arrested! Lacey updated her followers on Nicolle’s arrest, right up until she was released in August. This looks to be the same arrest that would eventually result in her prison sentence featured on Love After Lockup.

Here is a timeline of Lacey’s tweets about Molly’s arrest and initial release from jail:

July 3, 2016
I can NOT give details about the situation just know Molly is innocent and needs y’all her fans to help 💚 thx

July 4, 2016
Today only donate $5 get a date raffle ticket to my current date raffle [link] Molly wants to be in Vegas with us!

July 5, 2016
Update about molly: Lawyer was hired & she is awaiting a court date for a bond hearing. Keep her in your thoughts guys she misses u!

July 7, 2016
Alrighty so I’m getting online soon all tips today go towards Molly !! So come thru and show your support I’ll tweet when I’m live

July 27, 2016
Molly update: No new news. Going to add money to her books tonight! I know she misses everyone & her 2nd bond hearing should b soon!

July 28, 2016
If anyone wants to help me help Molly not eat city jail food everyday I’ll leave this here donate any amount [link]

September 17, 2016
Thanks for today 😘 be online tomorrow with Molly ❤️I’ll tweet tomorrow the time! 💞

Did Lacey get Nicolle on Love After Lockup?

Given that Lacey and Nicolle were quite close, that seems to beg the obvious question: Did Lacey get Nicolle on Love After Lockup? And the obvious follow-up questions would be: Did Nicolle trick Daonte just to get on the show? Was that just some elaborate scheme that she worked up with Lacey?

Those questions aren’t really answerable given the public information we have access to. Lacey and Nicolle have kept their friendship on the DL on social media since Nicolle started filming, so there are no clues there. I think the only way we would get an answer to these questions is if the Lacey and Nicolle friendship is a plot line that actually plays out on the show.

I could totally imagine a cliffhanger scene at the end of an episode in which Nicolle places a call to a “mystery” friend that is supposed to blow the lid off everything. Of course, the friend would turn out to be Lacey as it is revealed that she is an old friend. Perhaps they would even talk about making adult videos together as a way to ramp up the inevitable “no sex for Daonte” story line?

UPDATE – Daonte replied to our Instagram post about this article and at least clarified that he has never met Lacey. “Not surprised. I bet anything Lacey got him on the show,” one commenter wrote. “I’ve never even met Lacey 😂😂,” Daonte replied.

Want to join the conversation? Maybe you have a question for Daonte? Here’s the post:

To find out how WE tv handles the Lacey and Nicolle friendship (if at all), be sure to tune in for new episodes of Love After Lockup airing Friday nights at 9/8c on WE tv!

If you’re a bit impatient and want to know more about what happens with Daonte and Nicolle, we’ve got some HUGE spoilers for you! And they kind of tie in to the Lacey and Nicolle thing.