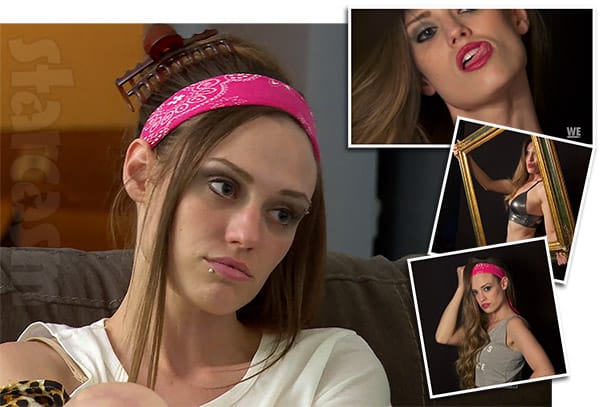 Love After Lockup Season 4 featured four female ex-cons with rather extensive criminal histories. Unfortunately, most all of the ladies have since added to their rap sheets as three of the four are currently back behind bars.

We previously shared information about Kristianna and Destinie being locked up again, and now we can share that Scott’s #HotFelon bae Lindsey Downs is also back in jail.

Lindsey is currently in custody at the Lafayette County Detention Center in Oxford, Mississippi. Online records indicate that she was booked on October 8, but that was reportedly not the first time she’s been in trouble with the law since her federal prison release in April/May.

Soap Dirt revealed back in late July that Lindsey had been “arrested three times since release.” The site reports that Lindsey was arrested for “serious charges” in mid-June, and then she was booked again the following month.

The local sheriff’s department “confirmed to Soap Dirt exclusively that they charged Lindsey Downs with possession of a controlled substance with intent, and possession of a firearm by a felon.” The site says Lindsey was also charged with “possession of a stolen vehicle and property and fleeing arrest.”

#LoveAfterLockup returns to @WEtv for a brand new season with a brand new cast on July 17, so we're doing our best to get you prepped with exclusive details on the new couples! Get the deets on 27-yr-old #hotfelon Lindsey from Mississippi!
💥🚗- – -🚓 https://t.co/4osavXk99V

The firearm and drug possession charges sound like the charges she was previously convicted of, so I am guessing that those have been re-activated due to a probation violation.

Given that Lindsey was previously arrested after a high-speed chase with police, I thought the fleeing arrest and possession of a stolen vehicle might be from her previous conviction as well. However, I checked my notes from our previous post detailing Lindsey’s previous arrest, and I saw that she was only convicted of the drug possession and firearm possession counts. (There appears to be a separate District Court case against her for grand larceny in 2016, but don’t have any additional information on that.)

So, it may be that the fleeing arrest and possession of a stolen vehicle charges are the result of something new Lindsey did after her prison release. There doesn’t appear to be any online records with detailed information about Lindsey’s recent arrest and charges. I am trying to find out more and will update this post if I turn anything up.

In addition to revealing details about Lindsey’s recent legal troubles, Soap Dirt also spilled some tea about her relationship with Scott. A “source close to Scott and Lindsey” told the site that Scott threw Lindsey out of their rented home, and added that he was “done with her after her recent crime spree.” [Property records indicate that the home shown on screen is owned by an LLC based in Memphis, not Scott.]

As Love After Lockup and Life After Lockup viewers are well aware, Lindsey wasn’t spending all of her time possessing stolen vehicles and fleeing arrest since being released. The 27-year-old mom also put her impeccable fashion sense and facial expression talents to work for a revealing modeling photo shoot!

I’ve gathered together some of the fruits of Lindsey’s modeling labor below — which includes a spread in Bikini Inc USA magazine!

Here’s a post from Lindsey promoting her appearance in the August, 2020 issue:

Judging from the MagCloud preview for the issue, this next image of Lindsey is also included:

If you check out the magazine preview at the link above, you will notice something a bit odd. Lindsey is listed as being 28 years old and from Walnut, Missouri. Maybe the hometown is just a fib in an attempt to make the magazine seem a bit more regional? I’m not sure.

I will send you off with several more Lindsey Downs modeling photos, including a few throwbacks. You can keep up with Lindsey and Scott’s relationship drama (and potentially Lindsey’s latest arrests?) with new episodes of Love After Lockup: Life After Lockup airing Friday nights at9/8c on WE tv.