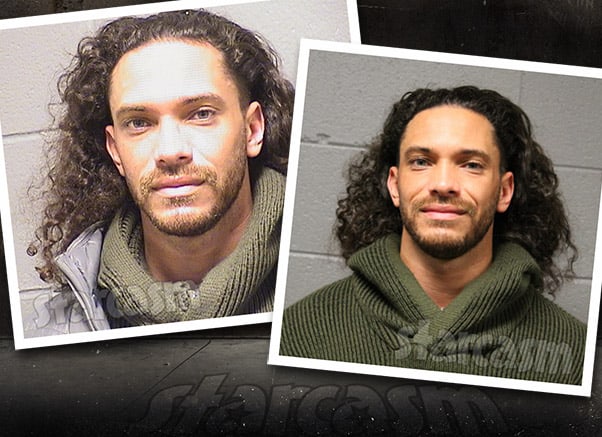 The cast of convicts from the most recent season of WE tv’s Love After Lockup appear to be cursed as four of the seven are currently back behind bars. The latest convicted cast member to be booked again is Dylan Smith, who is in custody in Illinois.

There were reports as early as last week that Dylan might be in some legal trouble again as diligent fans uncovered the fact that the Illinois Department of Corrections changed Dylan’s status to “absconder” on their website.

According to the Chicago Police Department website, Dylan was arrested at 11:24 AM on Thursday, December 10 at an address for a luxury high-rise apartment complex on the south branch of the Chicago River in Chicago. Dylan was moved to his new home in the Cook County Jail on Saturday, December 12.

The Chicago Police Department indicates that Dylan is facing charges of armed habitual criminal (felon in possession of a firearm) and possession of a controlled substance. His bond is currently listed as $50,000.

For his recent arrest, Dylan added two new mug shot photos to his already extensive collection. In the booking photos (above), Dylan can be seen with his long hair down and wearing a green sweater hoodie.

After Dylan’s arrest, his fiancée Marissa did an interview with Sharrell’s World to explain what happened. “His parole officer had came to check on him and did a random search,” Marissa says during the YouTube live stream — included below. “Allegedly they found a gun and drugs.”

Dylan and Marissa live together, but it doesn’t seem like she was present when the parole officer showed up Thursday morning. When asked about the drugs that were allegedly found, Marissa says: “I can’t even tell you if there was drugs. I’m not sure.”

The conversation then turns to the rumors that were circulating online that someone turned Dylan in. Marissa explained that they do not know the details, but they will eventually. From Marissa:

There will eventually be discovery and we will find that out. But, as of right now, Dylan was on parole. So that means that his parole officer can come at any time and search the house. If he was to get pulled over, that’s reason to search the car. That’s just a condition of being on parole. So there could be someone that said something, maybe not. Maybe they just came for a check in.

#LoveAfterLockup #SPOILER Heather & Dylan split up & she's been making wild allegations about him. Watch a video she used in her order of protection filing & read her numerous comments claiming that Dylan is a "sexual predator," a gay con artist & more! 👀 https://t.co/cPr4h15R3W

It is revealed that Dylan and Marissa spoke on the phone just prior to the interview. Sharrell asks her how he is holding up.

So why haven’t they posted Dylan’s bond yet? Marissa explains that Dyan is on a parole hold and he cannot bond out until that is removed. She says she believes his parole is up in June and he only has to complete half of it. “So, after three months, we should be able to go bond him out for $5,000,” she says.

However, being able to post Dylan’s bond is just the beginning. Marissa says her fiance is facing 6-30 years in prison on the firearm possession charge alone.

UPDATE – CWBChicago has since posted about Dylan’s arrest with additional information that makes it sound much worse for him. For one, the search of his residence wasn’t just a random check in. “Parole officers caught up with Smith at a condo in the 700 block of South Wells — reportedly after the North Side’s 20th District Commander Brendan McCrudden asked for them to check the residence,” the site reports. “Authorities executed a search warrant on the residence a few hours later.”

Dylan’s charges do little to reflect the scale of his alleged wrongdoing. He wasn’t just found with a single firearm and a little bit of drugs — it was allegedly multiple firearms and A LOT of different kinds of drugs.

“Prosecutors said police found a loaded 9-millimeter handgun, an 8-millimeter handgun with a bullet jammed in the barrel, 40 Ritalin pills, crack, heroin, Adderall, and a bag of pills that are believed to be Xanax.”

In case you missed it, Dylan has three other co-stars who are currently incarcerated. Destinie, Lindsey and Kristianna have all been arrested again since their release featured on the show. (Click their names for more details on their most recent arrests.)

#LoveAfterLockup #LifeAfterLockup Lindsey Downs is back behind bars in MS. Find out what we know about her latest legal issues. Plus, check out a couple of her infamous modeling photos from a recent issue of #BikiniIncUSA Magazine! 📸👙 #LindseyTeigen https://t.co/XqZiExOnzq

Here is Marissa’s full interview with Sharrell’s World. She enters the conversation at just around the 11:45 mark.