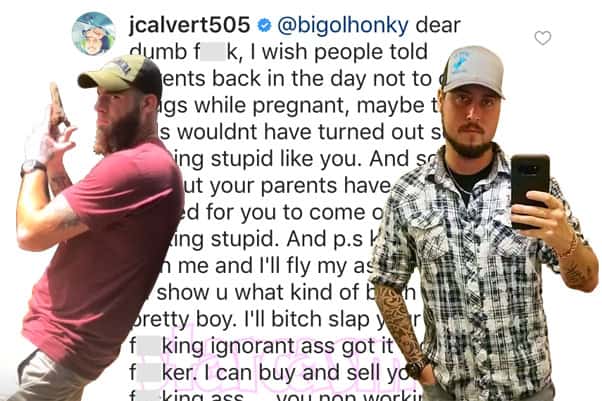 The dude feud went down on Jeremy’s account after he posted a photo of himself in a Reunion outfit that he said Leah picked out for him. Here’s the photo and Jeremy’s caption:

Reunion ready, when your ex wife picks out your outfit…. @leahdawn92mtv #addieapproved

The photo received a lot of laughs, including Leah. “Addie’s approval made it final!” Leah commented, adding this string of hash tags and emoji: ????♥️ #exwifeapproved #addieapproved #fineAF ?

David was apparently not a fan of Jeremy’s look, and he took to his keyboard to contribute some “talkin’ words” to the comments section. “Well ya look like a b*tch so there ya go,” David wrote.

That didn’t sit well with Jeremy, and he came back at David hundredfold with a vitriolic tirade that contained no less than nine f-bombs. In between the profanity, Jeremy points out that David doesn’t come across as very intelligent, and also that he doesn’t have a job. He proposes a couple theories about David’s conception before surprisingly referring to David as a “pretty boy.” Unfortunately, Jeremy concludes his rant by bringing up Jenelle’s lady bits.

Here is Jeremy’s full post, with lots of asterisks:

@bigolhonky dear dumb f**k, I wish people told parents back in the day not to do drugs while pregnant, maybe then kids wouldnt have turned out so f**king stupid like you. And sorry to say but your parents have to be related for you to come out so f**king stupid. And p.s keep f**king with me and I’ll fly my *ss to nc and I’ll show u what kind of b*tch I am pretty boy. I’ll b*tch slap your stupid f**king ignorant *ss got it mother f**ker. I can buy and sell your dumb f**king *ss…. you non working piece of sh*t. F**k you and f**k your wife and jesus any left over money needs to go to a vaginal surgeon #thatsh*tisbeat #godd*mn #rough

Jeremy’s disdain for David and Jenelle is nothing new. The professional pipeliner reacted to photos of Jenelle and Nathan’s son Kaiser with bruises on his backside in an Instagram live stream in which he stated: “If Nathan don’t [sic] try to get his kid, I don’t know what to tell that dude. I would have already been in court… even if I had to empty my savings account out, I’d go broke.”

Jeremy would later respond to Jenelle’s infamous road rage incident in which she allegedly pulled a gun on a stranger with Jace in the car. That got an angry response from Jenelle, who went so far as to reference Jeremy’s girlfriend Desi, who had recently gotten two DUIs in the same night. That REALLY set Jeremy off!

While we all sit back in hopes of Damon Feldman setting up a celebrity boxing match between Jeremy and David (or Cory Wharton and David, or anybody and David), I thought I might share a little meme I created that was inspired by the feuding fellers: