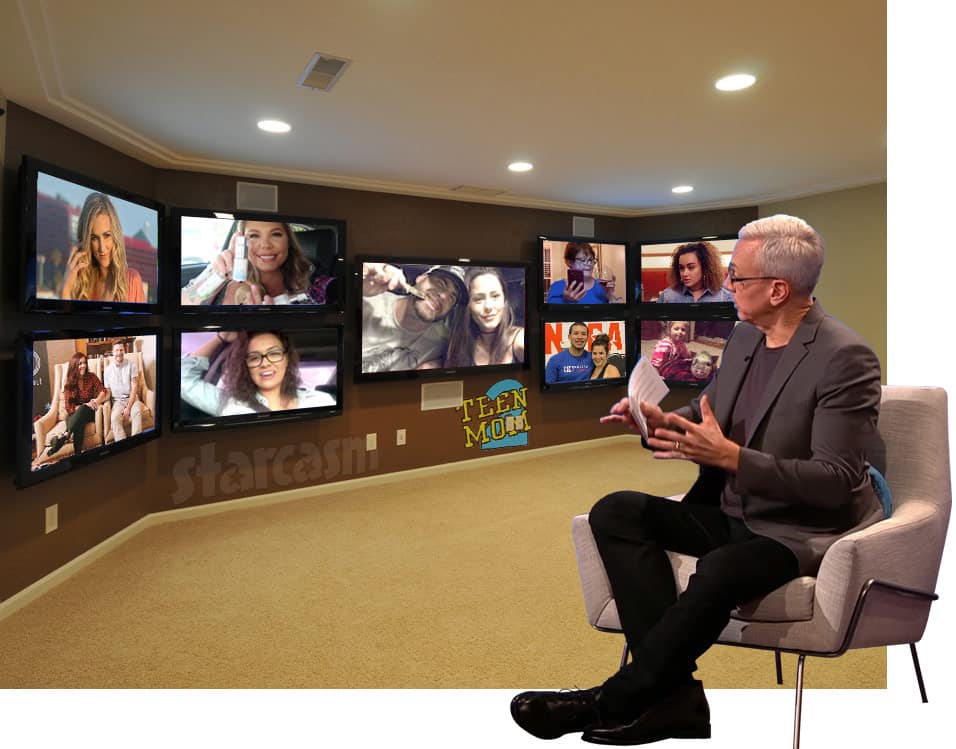 Thanks to multiple cast members indicating that they would not be in attendance, it seemed as though the Teen Mom 2 Season 9 Reunion taping scheduled for next weekend might be in jeopardy. Kailyn Lowry and Briana DeJesus both stated they would not be going, and Jenelle Eason revealed that she had a doctor’s appointment coming up that would determine if she would be there or not.

After much speculation about what was going on behind the scenes, Teen Mom scooplogist The Ashley’s Reality Roundup got the tea — and it’s a MESS!

According to The Ashley’s sources, there was the expected tension between cast members – particularly the lack-of-love triangle between Kail, Briana, and Jenelle. Although the cast tension was no surprise, MTV’s proposed solution is.

“As of last week, the plan was for Kail to room in Jersey City, New Jersey; Jenelle to be in Philly and Briana to be in New York City, along with Chelsea and Leah,” a production source tells The Ashley. “The idea was that Jenelle would be driven from Philly by someone from the show and taken to set, so that David wouldn’t be able to attend at all, or even be in New York while Kail and the others were there. Kail and at least one other girl expressed that they felt unsafe with his lurking nearby the set or hotels.”

The cast members were apparently OK with the long-distance arrangement, but things broke bad after producers revealed how they planned to handle the “group segment.”

The Ashley says that the new plan was for Chelsea DeBoer and Leah Messer to actually be on the stage in person with all three of the other moms Skyping in — Jenelle from Philadelphia, Kail from Jersey City, and Briana from her New York City hotel room.

Despite the source saying Briana would be Skyping in from her hotel room, the next development suggests that the plan was for her to appear on stage in person with Leah and Chelsea. “Kail was furious,” a source reveals. “She felt like the producers chose Bri over her to be there, even though Kail is an original cast member and Briana is not.”

The Ashley says that producers caved to angry Kail and “made the switch, telling Bri that she will Skype in and Kail will be in person, which is why Briana ranted on Twitter that she was no longer going.”

The timeline seems a little off given that Briana was the first to tweet that she wasn’t attending the reunion, and Kail tweeted less than a half hour later that she wouldn’t be attending either. ??‍♀️

Regardless, it was clear that a simple switch was not enough to make everyone happy, so producers moved on to Plan D. “Now, each girl is going to go to the studio on a specific day and time,” the source says. “They have worked out a schedule where Kail and Bri will not be there at the same time, and same with Jenelle and Kail. Several of the girls may do ‘Unseen Moments’ or those types of shoots together but it would not be Kail with Bri or Jenelle.”

In other words, it sounds as though Teen Mom 2 producers solved the age old puzzle involving the fox, a chicken, and a sack of grain to get all the cast members safely “across the river.”

One of the trio (I’m not sure whether she is the fox, the chicken, or the sack of grain in this situation) seemed content with the solution as Briana shared a series of tweets claiming that she was just joking about skipping the Reunion. She also shared some details about which members of the DeJesus entourage would be in attendance:

Kidding guys, I have to go to the reunion cause I’m A PART OF THE CAST you know ? just had to regulate some stuff but everything is all gravy ? see y’all in nyc next week❤️❤️

And yes @PBandJenelley_1 will be there as long as everything is ok health wise ???

And yes MY SISTER BRITTANY will be there and my mother ❤️ maybe even the kids this time ?

Also devoin and John (don’t know how I feel about that but I guess we shall all find out) ??

And I highly doubt Luis will be there due to nobody being able to get in contact with him but that’s fine ??‍♀️??‍♀️??‍♀️??‍♀️

#TeenMom2 @_BriBabyx3 and @KailLowry say they will both be skipping out on the Reunion next week, one day after @PBandJenelley_1 revealed she may have to miss due to health reasons. So, just @TM2LeahDawn, @ChelseaHouska and @Javimarroquin9?! https://t.co/00IEFWl9Bn

Briana then responded to a few tweets about the situation:

TWEET: Y’all hoes need to get along anyways man. You know how dope that would be to have some sort of “sisterhood”wit these women?! Mainly cuz teenmom ain’t forever.Y’all needa squash the beef.. all y’all cool as hell in diff ways. I hate that y’all didn’t get to kno each otherb4 beefin

BRIANA: It had nothing to do with the other girls my issue was with planning/production/what they wanted me to do.

TWEET: We all knew they would be there. You can’t do anything without your mom and sister

BRIANA: No they were asked to come ?

TWEET: You found out Kail wasn’t coming ?! But glad ur gonna be there!

Mad props to The Ashley for once again getting the scoop! Be sure to head over there for the full story, including information about how much money the cast members might have been putting at risk by threatening to skip the Reunion!

I don’t mind being on stage with everyone. I was willing to put everything aside. I was fine Skyping in until somebody caught a fit about having to Skype in too and wanted to change stuff but now everything is fine. changes have been made accordingly to fit every1s needs.

Any shadiness going on this year, I will dismiss myself ❤️ I guess stay tuned? Lol

TWEET: I don’t understand why do you and Kail still have beef?

I don’t have beef with anyone. I am passed that love triangle bullsh*t lmfao we on to better things this year baby!

David Eason goes on homophobic & transphobic Twitter rant, says ‘if you lay down with dogs you get up with fleas’