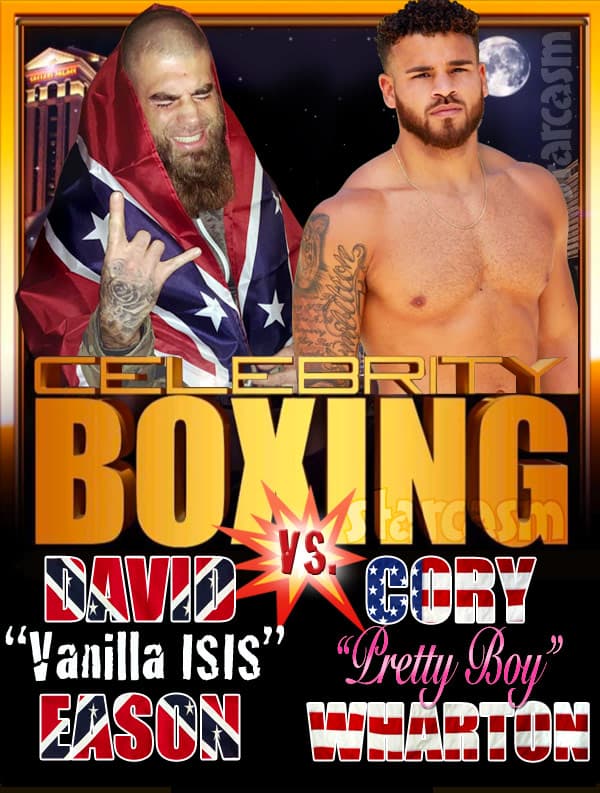 Here’s a VERY quick recap of the events leading up to this most recent development:

David Eason expresses anger at MTV for firing him over his homophobic and transphobic tweets, but then adding Cheyenne Floyd to the cast of Teen Mom OG despite making VERY derogatory tweets about white people.

Cory Wharton speaks with a paparazzo about the proposed Kail Lowry and Farrah Abraham celebrity boxing match and said: “Talking about boxing matches… David, Jenelle’s husband, that’s who I want. Set it up, man! Tell him to wear that Confederate flag on his back when he comes to the ring because it’s game time, baby, you know what I’m sayin’?”

David Eason responds to Cory’s fight proposal by calling him “boy” and a “racist bastard” in addition to calling Cheyenne a “hoe” and a “racist b*tch.” David also invited Cory down to The Land to duke it out. “Come on down to Riegelwood since you want to fight me so bad, I’ll be waiting.” Actually, I am guessing that David would rather shoot it out or perhaps have a pickup tow of war match rather than actual fisticuffs. (I think we all know Cory would fill the streets with uppercut for sure if it were any sort of boxing or MMA-style matchup.)

Soon after Cory’s street interview, and before David’s response (I assume), promoter Damon Feldman reached out to David about a potential boxing match between the two. In response to The Ashley’s Reality Roundup article about David’s rant this week, Damon tweeted: “Cory is cool we have talked but the other guy is a fake look at this,” along with a screen cap of an alleged text communication between him and David:

I will admit that I am a bit disappointed that David has turned down the chance to demonstrate the superiority of the heterosexual Southern straight male when it comes to hand-to-hand combat — and I’m sure Cory is too.

Despite being unable to land the “big fish” bout between David and Cory, Damon is still going ahead with his other 2019 celebrity boxing matches — including “Tan Mom” Patricia Krentcil against celebrity wedding planner Samantha Goldberg, and Teen Mom 2 lothario Javi Marroquin against a yet-to-be-determined opponent. Actually, I can’t find anything recent about the Javi fight, so that might have gone the way of Farrah vs. Hoopz?

UPDATE – On a sort-of-related note, The Ashley has just revealed that several MTV crew members are refusing to film Jenelle’s segments because of their concerns of what David might do. “There are some people who no longer feel safe going down there anymore because David has made it clear that he does not like the people from MTV, and that he has a ton of weapons,” one source reveals. “There have been multiple discussions among various crew member groups about the possibility of him coming to a location where we’re filming and opening fire if he’s in a bad mood or something, even if it’s just to scare us.”

In response to The Ashley’s story, we made this not-really-that-funny image: