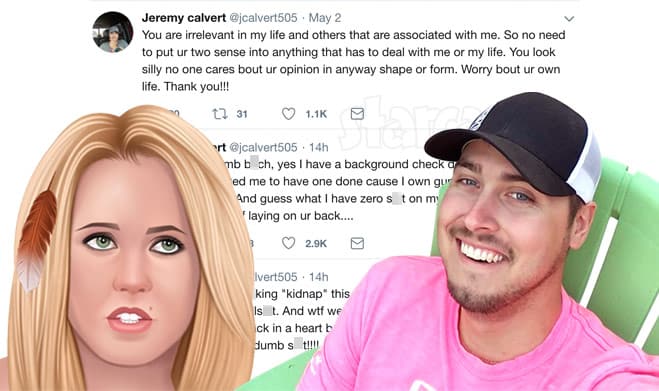 Teen Mom 2 star Jenelle Eason is all but drowning in bad publicity, thanks to her controversial husband David Eason and her recent road rage incident in which she reportedly pulled a gun on a man at his home. As the troubled reality star gets sucked down further and further into the whirlpool, she seems to be desperately clawing and scratching at anyone and everyone within reach.

After having her Facebook page suspended for 30 days, Jenelle took to Twitter to lash out at those who have recently offered up criticisms of her actions, including Leah Messer’s ex-husband Jeremy Calvert, Chelsea Houska’s dad Dr. Randy Houska, and Teen Mom news source The Ashley’s Reality Roundup.

In case you missed it, Jeremy Calvert used Jenelle’s alleged gun-toting road rage incident to challenge Teen Mom 2 Executive Producer (and avid proponent of more restrictive gun control laws) Morgan Freeman to put his money where his mouth is. “Aren’t u against guns and gun violence?” Jeremy asked in a tweet tagging Morgan. “So what’s ur next move in regards to the situation at hand with what took place with a cast member and a weapon… just curious!!!!” Jeremy, a staunch proponent of the 2nd Amendment, then adds: “And you want me to do a background check because I own guns nahh.”

Dr. Randy Houska responded to Jeremy’s tweet by making a joke referencing early reports that there were two children in the vehicle with Jenelle at the time of the incident: “Don’t worry, she was being supervised by two young children,” he tweeted.

Jenelle took to Twitter just after 3AM Eastern time Friday morning to offer her retorts. “Hey @jcalvert505, that’s funny you don’t want a background check for all your guns but in order for myself to even obtain my gun I had a full background check. I’m legally allowed to have mine, but are you?”

She continued by demonstrating how up to date she is on recent Teen Mom 2 news by referencing the fact that Jeremy’s new girlfriend Desi Kibler was recently arrested for DUI twice in the same night: “@jcalvert505 and to be correct ‘bro’ shouldn’t you be worrying about that 22 year old you just bailed out for DUI?! Lmfao Hope Leah doesn’t have her kids ride with your new side piece. ? #YIKES”

Someone obviously not entertained by all the drama offered Jenelle some succinct (and probably wise) advice by tweeting simply: “Girl log off.”

Never much of one for listening to probably wise advice, Jenelle continued her early morning outburst by defending her defensiveness with her response: “He needs to log off or get the background check for all his guns like @MTV is asking, but come at me?”

Jenelle then shifted her sights to Randy, with whom she has had previous heated social media exchanges with: “And then we have Chelsea’s dad trying to throw his two cents in… as usual. It’s crazy to me an old man that’s a dentist gets online to stalk and bully young girls. #Troll”

A follower asked Jenelle why Randy should be considered a bully when he was speaking the truth, to which Jenelle replied: “I had two kids in my car? He doesn’t know a damn thing.”

That closed the chapter on her Dr. Randy Clapbackegery — next up was The Ashley’s Reality Roundup, who was quick to defend herself against Jenelle’s jab at her journalistic integrity:

Just to clarify… Haven't reported that in weeks. Plus my last stories about her are literally about her filming so…not sure where she's going with this one… #welljuhnelle pic.twitter.com/lyrMG7IH7I

The Ashley's motto in life has always been "If you have a problem with everybody, the problem is you."

Meanwhile, Jeremy Calvert caught wind of Jenelle calling him out on Twitter, and he returned to fill his tweets with uppercut — BIG TIME! Before we get started, I should mention that David Eason made a post in which he stated that Jenelle was at risk of being kidnapped during the road rage incident. I have no idea what he meant, and he didn’t clarify, but Jeremy references that comment so I felt I should mention it.

Dr. Randy was a bit more subdued with his response:

Jenelle’s co-star Leah Messer has remained relatively silent throughout the fallout from Jenelle’s road rage incident, but even she couldn’t resist responding after Jeremy’s tirade:

80% is true… I believe what we do is a job for some of us even if it's a little different from your normal 9-5. Jerm just gets a little pissed and doesn't think through everything he's about to say LOL

Jenelle has been essentially Twitter silent for about 15 hours at the time of this post. Stay tuned.