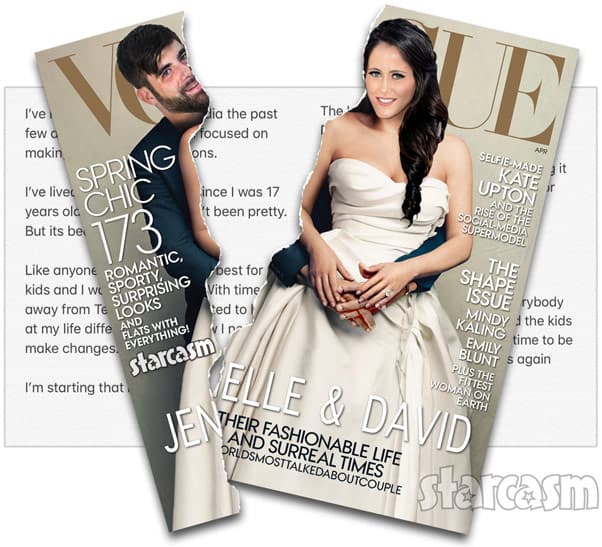 I’ve mostly kept off social media the past few days because I’ve been focused on making some big life decisions.

I’ve lived my life on camera since I was 17 years old. And alot of it hasn’t been pretty. But its been my life.

Like anyone else I want what’s best for my kids and I want to be happy. With time away from Teen Mom I’ve started to look at my life differently and I know I need to make changes.

The kids and I have moved away from David.

Nobody gets into a marriage expecting it to end but I know thats what is best for me, and for my kids.

I appreciate the support from everybody who has asked how I am. Me and the kids are doing great. We need some time to be together. But you’ll hear from us again soon.

The statement is very carefully worded, and it doesn’t sound like Jenelle at all. (Not a single “Are you guys happy now?”) If Jenelle and MTV were working towards her Teen Mom 2 return, this is EXACTLY what a PR person (an actual PR person) would write. It could very well be that the sentiment of the statement is accurate, I’m just pointing out that this IS NOT how Jenelle would say it.

Jenelle’s statement, in conjunction with her recent meeting with MTV, has many speculating that the separation is just a ruse so that Jenelle can return to the show and start getting paid again. As we’ve stated numerous times, MTV’s announcement about Jenelle’s departure did not say they were parting ways for good (like their statements for Farrah and David), merely that they would not be filming her for the current season. And it has been established that the main reason they refused to film Jenelle was because of her marriage to David.

REAL SPLIT OR SCHEME TO GET BACK ON TV?

So, is this just a fake separation? Hol up! The world’s leading expert on all things The Land says the split is for real! “The Ashley hears that this is 100 percent legit and not a publicity stunt or a fake separation to get her back on Teen Mom 2!”

The Ashley also provides some exclusive behind-the-scenes context for the split. Her source tells her that there was a bit of an afterglow once David and Jenelle regained custody of their children in July, during which time David was being “decent.” The couple eventually got back to their old ways, however, and they have reportedly been fighting constantly for the last few weeks.

The Ashley says Jenelle got a call from MTV wanting to meet in New York City, and it was something she was very excited about. However, David did not want her to go. “So Jenelle basically waited until David was sleeping and essentially snuck off to catch the plane,” The Ashley’s source reveals, adding that Jenelle was already planning on starting the divorce proceedings before she caught the flight.

Just as the statement says, Jenelle has taken Ensley and Kaiser and is currently not living on The Land. That means it is now just David, his daughter Maryssa, and a bunch of animals. The couple reportedly have no prenup, and The Land is in both of their names.

By the way, all of the events over the past week involving Jenelle and David were essentially live tweeted by @ustacouId.

Watch the unprecedented #TeenMom2 scene in which producers have a conference call with Jenelle to discuss her future on the show if she remains married to David Eason. Includes a recap of everything leading up to it & a full transcript of the conversation. https://t.co/6cN4f7kLSn pic.twitter.com/Xat9WMu3c3

IS JENELLE RETURNING TO TEEN MOM 2?

Jenelle wants to return to MTV, and The Ashley has a production source who says the crew has no problem working with her again if David is out of the picture. That essentially leaves the decision up to MTV and their parent company Viacom.

The network would love to be able to bring Jenelle back. Even the “hatters” would have to concede that her “dramastic” antics are a huge part of the show’s success over the years. MTV tried to fill the drama void left by Jenelle by adding Teen Mom: Young and Pregnant hot mess Jade Cline to the series. But, it seems Jade’s constant screaming and complaining about her drug addict ex Sean and her mom Christy (who was arrested for meth possession earlier this year) has not stopped the show’s ratings slide.

The first few episodes of the new season after Jenelle’s departure saw a slight dip in the ratings, but the last three episodes have been dramastically lower, with each bringing in less than 700,000 viewers.

So what’s stopping MTV from bring Jenelle back? Despite Jenelle’s separation from David, she is still inexorably tied to him and all of his controversial statements and actions because of how vehemently she has supported him over the past two years. As evidenced by their quick and clear termination of David, a progressive network like MTV simply cannot be associated with a homophobe who wraps himself in a Confederate battle flag and shoots French bulldogs in the back yard.

Another important factor to consider is that Jenelle has been so antagonistic for so many years that her detractors (often referred to as hatters) have become a very large and very well connected network of people dedicated to not letting Jenelle (or anyone else) forget what she and David have done and said. Most all of Jenelle’s numerous business ventures over the past six months have tanked because of hatter marketing campaigns directed at her business partners, event venues, and advertisers.

This isn’t a situation where businesses withdraw their support of Jenelle in order to avoid harassment, they terminate their business relationships with Jenelle with statements condemning her and apologizing for not knowing more before working with her. Here’s an example from the salon in New York City that was initially slated to host the launch of Jenelle’s JE Cosmetics line, but backed out at the last minute:

Our salon was unaware of what her and her husband have done or have been connected to, and in no way, would we support such brutality. We apologize for not doing our research before hand.

So the question is whether or not MTV (aka Viacom) are willing to risk the inevitable negative publicity and potential loss of advertisers in hopes that Jenelle will boost ratings enough to compensate for it.

Number one, MTV bringing Jenelle back after letting her go for a season will be a clear show of support. Re-hiring someone is usually perceived as a much bigger statement than not firing someone.

Number two, Jenelle is going to have to go on record condemning some of the things David has said and done over the last two years. The very careful and very safe statement she issued today WILL NOT be enough for MTV to welcome her back.

Will the hatters buy it? Of course not, because Jenelle has an extensive history of flip-flopping on major issues from week to week. But, it’s not the hatters that she’s making the statements for. This is for the network and for advertisers who need specific statements from Jenelle flatly condemning things like David taking Nugget out back and shooting her.

I wish Vegas had betting odds for everything. I wonder what the payoff would be on a $100 bet on Jenelle being back on #TeenMom2 by the end of 2020? ? Of course, the #TeenMom shows are kinda hurtin' in the ratings, so who knows if there will even be a #TeenMom2 much longer ?

After MTV announced they would not be filming Jenelle this season, I stated that it was my belief that they would welcome her back immediately if she left David Eason. Since that time I have seen the well-oiled hatter machine at work, and I’m not so sure any more.

My prediction at this point is that she will be back, but before the season airs there will be a one-hour special in which Jenelle sits down with someone like Dr. Drew. There will be a quick turnaround on the special announcement and air date to limit the backlash snowball. Jenelle will cry a lot and talk about how her relationship wasn’t perfect with non-specific references to abuse. (The old Jenelle would have complained about how the negativity online was a huge reason for their issues, but the new Jenelle will have been instructed not to go that route.) Barbara will also be on the special and will say how proud she is of Jenelle for getting out of the relationship and how the focus is now on the children, etc.

Personally, I’m happy for Jenelle and think that leaving David is something she should have done long ago. However, as a fan of Teen Mom 2 and someone who has enjoyed watching most of Jenelle’s antics over the past decade, I don’t want to see her back. David has been such a huge, ummm, jerk, and Jenelle has been right there supporting him all along. For example, when they lost custody of their children and it was revealed that Jenelle could regain temporary custody during the investigation if she (or David) just moved away from The Land, Jenelle chose to remain with David for SEVEN WEEKS while other people took care of their children. I just don’t want to watch her with Ensley and Kaiser after that. (Jace lived with Barbara, so that didn’t seem as bad.)

#TeenMom2 All the latest updates on David Eason shooting Jenelle's French bulldog Nugget after the dog snapped at Ensley, including Jenelle's 1st interview in which she describes what happens and reveals she and David are "not on talking terms" https://t.co/CEsaNFuOgv

I learned long ago that my perspective is different than most casual reality show viewers because I am wrapped up in all this drama 24/7 as part of my job. It could very well be that 95% of Teen Mom 2 viewers would enjoy having Jenelle and Barbara back on the show without David. I assume those are the numbers that MTV execs are crunching right now.

Playing devil’s advocate, MTV welcomed Amber Portwood back after a felony domestic violence conviction, and again after her most recent felony domestic violence arrest. Also, Amber has lost physical custody of both of her children and she filmed throughout her relationship with Matt Baier — who was not much better than David. Jenelle has certainly been a jerk, but it would be difficult to argue that her resume (without David) is as bad as Amber’s.

Although I don’t really want to see Jenelle come back, I confess that I am enthralled with the drama surrounding whether or not MTV will do it! I cannot imagine what the discussions are like right now at MTV headquarters! Thankfully, The Ashley has their home office bugged and I’m sure we will get ALL the details soon, so stay tuned!

To kill some time until the next update, here is some BRILLIANT fan fiction from reddit scripting out Jenelle’s return in advance: