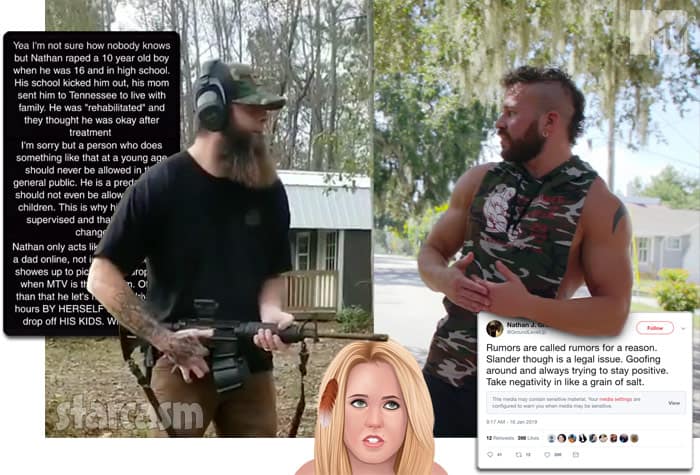 I spent many hours last night writing a post expressing my admiration for the loving and mature scenes between Chelsea DeBoer and her daughter Aubree during the Teen Mom 2 Season 9 premiere Monday night. I concluded that post by half joking that today I would be back to writing about more crazy ? from David Eason. Well, here we are…

In the Teen Mom 2 Season 9 premiere, both Jenelle and Nathan talked about the events over the summer in which Nathan’s mother Doris refused to return Kaiser to Jenelle and David in accordance with their custody agreement because of bruises found on Kaiser’s bottom. Nathan insists that the bruises are marks from a switch or stick, while Jenelle continues to argue that they were caused by a water slide at Kaiser’s daycare.

After the episode aired, Nathan took to Twitter to post photos of Kaiser’s bruises and he wrote:

Cut the truth! No one, no magazine and no sponsor wants to publish this because of guidelines. Bruise? Or bruises? Water slide right? My son told me that he got hit by a stick. Recently, David broke his cell phone with a hammer? “Kaiser said”

[Nathan is right in that we do have guidelines that prevent us from posting the photos, but you can click the link above to see the pictures on Twitter.]

@MTV please stop playing an innocent bystander. Editing is hell. This is my son. My pride and joy. Tons of unedited pill bottles, alcohol bottle, neglect, and indecent conversations are film around children. It shows nothing but greed. People love resolutions and a happy ending.

David caught wind of Nathan’s comments and he took to Snapchat, after being booted from Facebook and Instagram, to offer up his angry response — which included allegations that Nathan raped a 10-year-old boy when he was 16:

Looks like Gaythan isnt getting enough attention? So he decided to post naked pictures of a 4 year old. I guess he didn’t learn his lesson when he got in trouble for rapping a 10 year old boy when he was 16… Yes, Nathan is a rapist! He also severely beat 3 women that we know of. He hit Jenelle with a truck. Kaiser tells us every other week that Nathan and Ashley fight and yell at Nanna and its “very scary”

Yea I’m not sure how nobody knows but Nathan raped a 10 year old boy when he was 16 and in high school. His school kicked him out, his mom sent him to Tennessee to live with family. He was “rehabilitated” and they thought he was okay after treatment.

I’m sorry but a person who does something like that at a young age should never be allowed in the general public. He is a predator and should not even be allowed around children. This is why his visits are supervised and that will never change.

David then addressed Nathan’s claims that Kaiser’s bruising was caused by David hitting him with a stick or switch:

Kaiser also told us that Nathan was the one who put those marks on his bottom. Must be true because it wasn’t there when Kaiser left and wasn’t there when he got home 3 days later. It was probably makeup for all we know. I mean Nathan does wear makeup and shave his legs everyday so I wouldn’t put it past him. He also painted Kaiser’s finger and toenails with pink fingernail polish. I told him he better never do no gay sh*t to Kaiser like he did to that little boy!

Nathan seemed to be reacting to David’s claims with a tweet that included a video of him dancing at the gym while the song “Lovely Day” by Bill Withers played:

Rumors are called rumors for a reason. Slander though is a legal issue. Goofing around and always trying to stay positive. Take negativity in like a grain of salt. pic.twitter.com/jtg00Djgjs

[It’s hard to find ANY humor in this situation, but the fact that Twitter marked that video as potentially containing “sensitive material” did make me crack a smile.]

Nathan also spoke with Radar Online and denied David’s rape allegations. “He lies about me all the time. That is disgusting, there is no way that would happen,” Nathan said. “I never had a mental disorder. I never went to rehabilitation, no one in my family has been to rehabilitation. Their claim is defamation of character.”

Nathan reveals that the rape rumor was spread by Jenelle’s manager years ago before he once again tried to turn the tables back on Jenelle and David. “The best way to tell the truth is past behavior. We have all seen their history. Some people make changes in life, but others are self-destructive to themselves and people around them. I am handling it in my own way.”

But, it waisn’t only Jenelle’s manager who has previously brought up an alleged incident involving a teen-aged Nathan and a 10-year-old. Back in March of 2016 Jenelle herself brought it up on Twitter after David started a controversy by posting a photo of Kaiser with his hand down the inside of the front of his diaper and captioned it by writing: “Now where’d he learn that? #deeznuts #gotem #almostaman #toobigformybritches #canttouchthis #notashamed #teamkaiser.”

The photo caused quite the controversy, including an upset reaction from Nathan. “How freaking low, disrespectful and humiliating can you be?” he tweeted, adding the #goodjob hash tag. Jenelle responded to Nathan by tweeting: “You know since day ONE Kaiser has always done that. Nothing surprising.” But, in another tweet she wrote: “We can bring up your story as a 14 year old and a 10 year old boy if you want to talk about that subject. #JustSayin”

Jenelle also did something similar with another ex, Kieffer Delp, when he and Nathan got into a Twitter beef in 2013. That unpleasant exchange included the term “butthole tension” and seemed to be referencing some sort of sexual incident from Kieffer’s past.

Speaking of Jenelle’s old tweets, I thought I might finish up this post with a throwback to the good ol’ days of Jenelle and Nathan — back when their relationship was where Jenelle’s and David’s is now:

In summary, everything positive I said about how Chelsea handled the situation with her ex Adam Lind with her daughter Aubree is the exact opposite of this situation with David, Jenelle and Nathan. In addition to the alleged physical abuse going on, I can’t imagine what Kaiser has seen and heard through all of this. (That scene where Jenelle is crying about Nathan or something similar, and Jace begins singing “The Rainbow Song” in the backseat as a coping mechanism is one of the saddest moments I have ever witnessed in reality TV.)

There is a human child who is going to grow up and have to deal with photos of his bruised naked backside being national headlines as well as his (ex?) step-dad accusing his birth dad of raping a boy. And that is only the stuff from the past few days. It’s just horrible to think about.