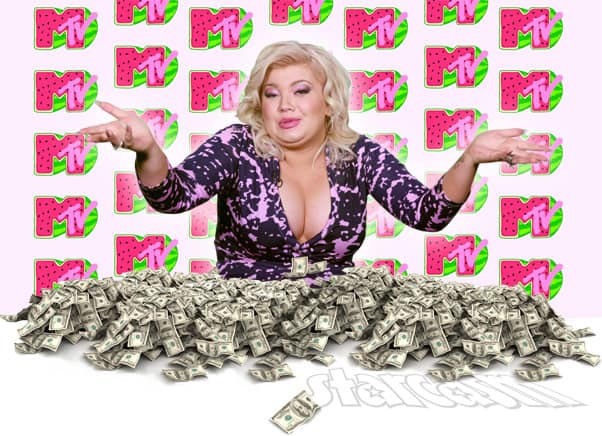 In the aftermath of a series of disturbing audio recordings leaking online featuring Teen Mom OG star Amber Portwood enraged and threatening to kill her ex Andrew Glennon multiple times — all in the presence of their infant son James — it was assumed that MTV would be making a statement revealing that they had fired the 29-year-old from the show. Some outlets have gone so far as to claim they had sources from MTV’s parent company Viacom telling them that Amber’s firing was a done deal. However, all of the speculation and false reporting were premature because MTV is not firing Amber, and they have already been filming her for the new season!

The news of Amber’s continued employment with MTV comes via The Ashley’s Reality Roundup, who reported last Thursday that there was an executive conference call discussing Amber’s future on the show. The Ashley has been VERY adamant over the past week that no final decision had been made, despite the numerous online reports to the contrary.

“She is not being fired by MTV,” a production source tells The Ashley today, before revealing that Amber is already back to “work” in front of the cameras.

“Amber has 100 percent filmed for the new season,” the source says. “[The producers] plan to film with Amber through her court trial [for the domestic battery charges.] Whatever happens there will obviously dictate if she remains on the show or not.”

Speaking of Amber appearing in court, fans will recall that Amber’s Teen Mom OG co-stars Maci McKinney, Catelynn Baltierra, and Cheyenne Floyd were with Amber at a recent court appearance to show their support for their co-star. That support appears to be waning a bit in the wake of the terrifying audio recordings of Amber.

#TeenMomOG Amber Portwood was in court today for a custody hearing stemming from her domestic violence arrest and her co-stars @CatelynnLowell @MaciBookout & @itskcheyenne were there with her to show support! As were @MTV producers & @ItsGaryTime. https://t.co/lLzs3ZxgMX

“My heart breaks for everyone involved and affected by this terrible situation,” Maci wrote in a statement. “I do not condone or support abuse or violence of any type. Amber has been a close, genuine friend of mine for many years, I will support her in getting the help she needs. I truly hope and pray that everyone involved receives the help necessary to recover from what has happened, and the guidance to prevent future incidents. -Maci”

Catelynn Baltierra also shared her reaction last Friday. “I would hope that from watching my journey for 10 years that you all would know that I do not condone violence of any sort especially in front of children,” she wrote. “My heart breaks… and I am truly sad… I in no way condone violence!! I hope she gets the help she needs…”

The following day, Catelynn clarified that she was completely unaware of the audio recordings until they were posted online. “Just know that I didn’t hear that audio till all of you did and I’m so sad and heart broken…”

Catelynn’s husband Tyler was the first cast member to react. “Honestly…my heart is really saddened by what I have heard,” he tweeted on Friday. “I just pray that everyone gets the help they truly need in this situation. Abuse is NEVER okay…EVER! ????”

Tyler’s tweet sparked a heated conversation with YouTuber Without A Crystal Ball, who posted the audio clips:

Andrew later confirmed that he had spoken with Tyler as well as his wife Catelynn:

Thank you @catelynnmtv @tylerbaltierramtv for reaching out to me during this horrible time. There is a lot of healing I have to do… perhaps more than I know. I brought James to an exhibit on the ancient samurai (one of my favorite time periods) and nearly had a panic attack when I entered the room with all the swords. I did not expect that reaction or even think about it prior, but it hit me hard and I had to leave immediately. Hope these feelings go away soon and I can get back to a normal existence.

Cheyenne Floyd also responded, but the non-OG star kept it very non-specific. “All I can say is that I am a praying for everyone involved,” she tweeted. “My heart is so sad after what I heard and I hope she gets the help she needs.”

Meanwhile, someone who was an OG and who was very specific in her response was former Teen Mom OG star Farrah Abraham. Here is her statement taken from the text she added to a screen cap of a post about the Amber audio recordings posted on her Instagram story:

Wow this was sent to me today.. I’m so disgusted by the cast of teen mom … the injustice, no ethics, illegal abusive behavior in front of a child. 10 years same behavior .. JAIL TIME FOR THIS FREAK!

If all the “moms” on this show support this behavior their all unfit moms, the show is responsible for this relationship, this child abuse. It’s disturbing, disgusting and illegal.

I’m noticing online that a lot of fans are upset with MTV for firing Farrah over her legal “adult industry” business ventures while choosing to keep a repeat domestic abuser like Amber Portwood on the show. Just based on those merits, I COMPLETELY agree! But, I should point out that it was more than just Farrah’s foray into adult entertainment that got her canned. It was also because she was reportedly horrible to work with. (Of course, it wasn’t because Farrah was horrible to work with that Maci refused to film.)

Personally, I am shocked that MTV did not fire Amber. I am totally on board with the “innocent until proven guilty” belief, but there are multiple reasons to sidestep that in this case. Number one, Amber WAS PROVEN GUILTY of being a domestic abuser — and she served years in prison for it.

Number two, those audio recordings are enough to at least part ways with Amber for now — much as the network has done with Teen Mom 2 star Jenelle Eason. (No, Jenelle was not ever officially fired. MTV merely announced they would not be filming her for the current season.)

Unlike Amber, Jenelle has never been convicted of a felony, and she was booted from the current season only because she was married to David Eason. If being in a relationship with a terrible person is reason enough to cut someone from the show, then MTV should have booted Amber back in the Matt Baier days. And as far as Farrah being let go in part because she is difficult to work with, there are reports that Amber isn’t a walk in the park for producers either. 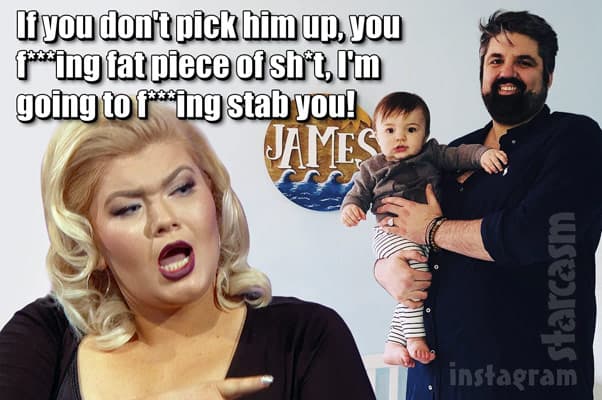 Despite my shock over MTV not firing Amber, I’m not necessarily opposed to keeping her on the show. This is “reality” television is it not? The grey area for me is the fact that she will be getting paid A LOT of money to film. That seems to really flirt with violating the Son of Sam laws, which are “designed to keep criminals from profiting from the publicity of their crimes.”

If it was revealed that Amber had struck a deal with MTV and producers where she would personally receive no proceeds for the upcoming season, and all of the money would go into a trust fund for Leah, then I really wouldn’t have a major issue with her being on the show. Those who argue that it glamorizes domestic abuse or something similar are just wrong. Amber’s outbursts on screen (even her Instagram live session responding to Jenelle) are the furthest thing in the world from glamorous. Who in their right mind would watch Amber in those moments and think: “I wish that was me!”

Also, it really is important to highlight female on male domestic abuse — especially verbal and psychological abuse that can be harder to document after the fact.

I will wrap up this post with an actual quote from Amber: 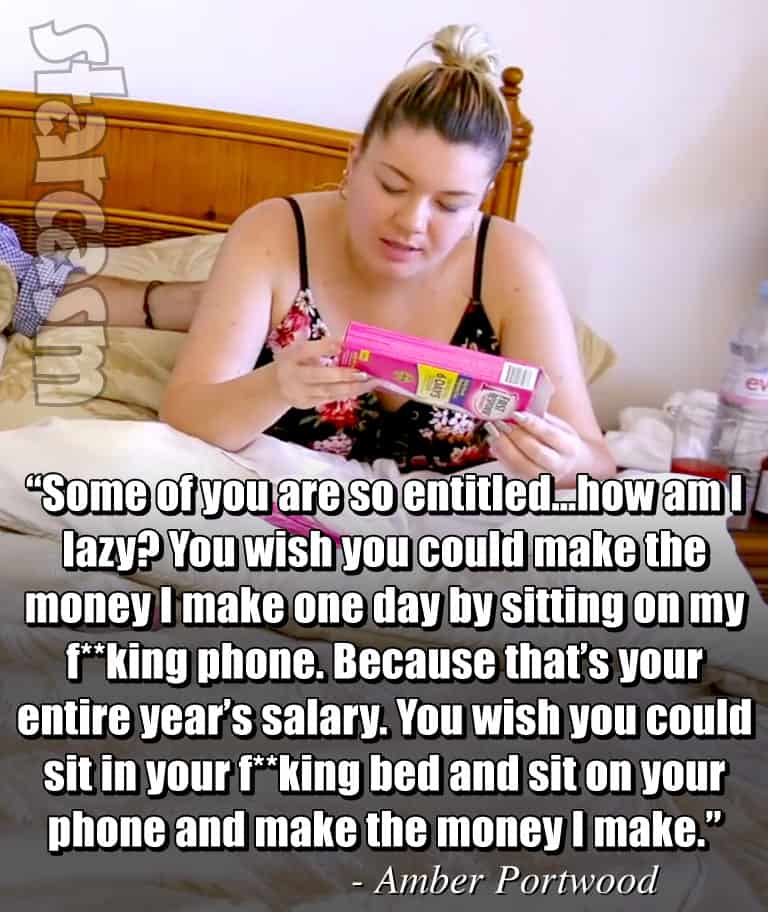 Matt Baier’s ex-wife speaks out, to appear on Dr. Phil?