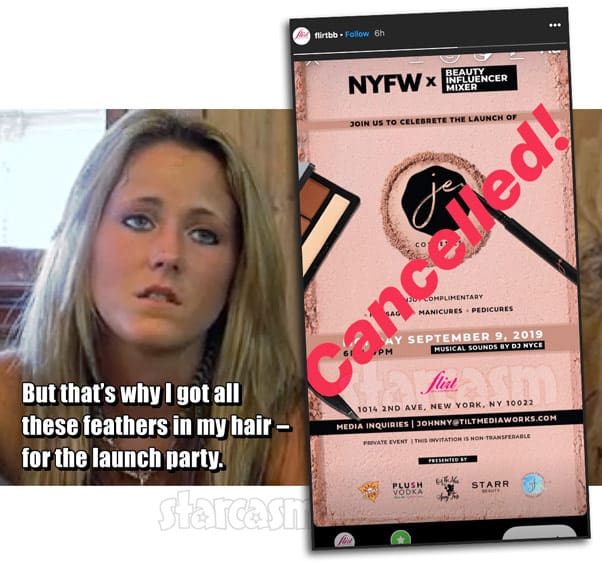 “This event has been cancelled at our venue!” The Flirt Beauty Boutique captioned a promotional image for the launch party with the word “Cancelled” spelled out over top of it. “Our salon was unaware of what her and her husband have done or have been connected to, and in no way, would we support such brutality,” the salon’s statement continues. “We apologize for not doing our research before hand.”

The cancellation comes after the salon’s social media accounts were inundated with angry messages. The outrage also spilled over to third party review sites likes Yelp where the hatters were leaving numerous negative reviews for the salon. (Flirt Beauty is responding to many of the bad reviews by revealing the event has been cancelled and asking that they be removed.)

All mentions of the upcoming launch have been erased from both Jenelle’s Instagram page as well as the JE Cosmetics Instagram page. Jenelle hasn’t commented on the launch party cancellation specifically, but it does appear that she has had some sort of falling out with someone based on a screen capped text message she posted to her stories on Saturday: 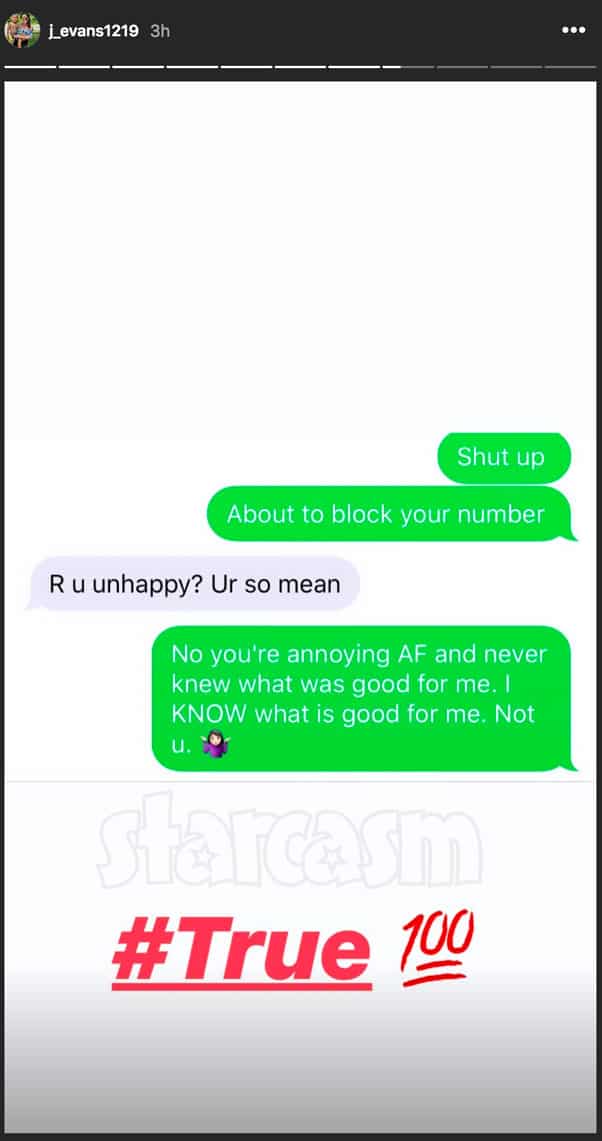 Prior to the launch party cancellation, Jenelle issued a statement to Teen Mom Talk Now about how difficult things have been after all of the recent controversies involving her and her husband David Eason:

I’m being harassed by haters at the moment because of something that happened and wasn’t ever my fault to begin with. I’m just doing my job as a mom everyday and taking care of my kids. I am continuing on with the next chapter in my life and would like all the hateful comments, false accusations, and fake reviews to stop. I have never abused an animal in my life and continued to be an avid animal lover. We now have been raising a little homestead at our house and I have learned a lot the past 6 months. Everyone needs to move on with their lives because we are too.

Despite the setbacks, Jenelle says “no matter what happens…nothing will stop me from launching my new brand.”

UPDATE – Jenelle has since clarified that the launch party was not cancelled, but that it had to be moved after the location was “leaked.” She also explains what she means by “leaked” when the information was posted on her manager’s Instagram account. Click the link for all the latest!

Meanwhile, Jenelle’s husband David Eason is having similar setbacks with his own business ventures. The former underwater barnacle scraper recently revealed he has taken up blacksmithing and announced that he planned to sell handmade knives (aka balloon poppers) and little leather twisty bracelets under the business name Black River Forge.

The ever-diligent hatters discovered that there is already a Black River Forge in Texas, and they were quick to let them know about David using the same name. “Thank you for bringing to our attention that someone is using the same business name,” the original Black River Forge stated on their Facebook page. “We are not familiar with David & will look into this matter.”

One day later, the group shared this statement on their Facebook page:

Black River Forge is a small cooperative of craftspeople, artists and hobbyists in central Texas – particularly those who specialize in hot metalwork and heavy machinery.

Black River Forge was originally formed as a loose amalgamation of artists around 2012. In 2014 we formalized our group by registering as a Limited Liability Corporation in the state of Texas. While we have been undergoing some restructuring for the past couple of years during the rebuilding of our shop facilities and machinery, we have remained active outside of our public facing.

David Eason is not currently, and has never been, a member of our cooperative. He has never had any affiliation with our group in any capacity. Until August 7th, 2019, we had never even heard of him. Any use of our name, graphics, likeness, or identity is done so entirely without our permission.

We would prefer to avoid pursuing legal action, but are prepared to do so if necessary.

David has since launched an etsy page under the slightly altered name “BlackRiverMetalnWood.”

It definitely looks like the Easons are facing an upmountain battle in an attempt to replace the income lost when they were both booted from Teen Mom 2. I suggest they take a hint from Elvis Presley’s manager Colonel Tom Parker.

Of course, Jenelle is still reportedly rakin’ in thousands of dollars a month from clickbait articles, so perhaps that will be enough to keep The Land financially (and physically) afloat?

How did Jenelle Evans’ boyfriend David Eason get that scar on his neck?