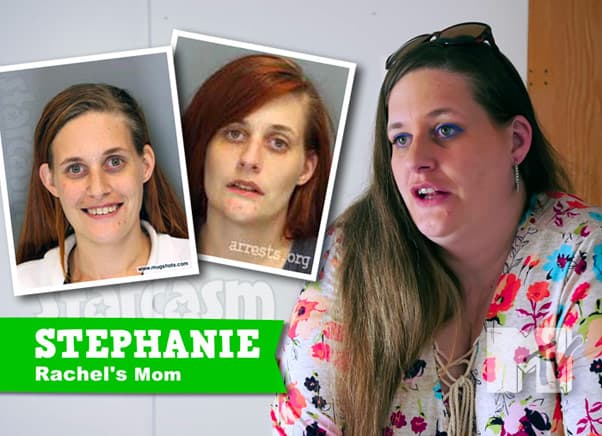 New Teen Mom: Young and Pregnant cast member Rachel Beaver has been open on the show about her mother Stephanie’s drug issues. “While I was growing up, my mom struggled with addiction,” Rachel revealed during the Season Premiere. “But she turned her life around and is really there for me now,” she added.

Stephanie’s drug issues included an arrest in Georgia in 2012. According to court documents, Stephanie Bollen was charged with possession of meth and possession of Oxycodone in April of that year. She was arrested with a man who faced the same two drug possession charges in addition to a charge of receiving stolen property in the form of a 2003 Hyundai Santa Fe.

Stephanie was found guilty in November of 2012 and sentenced to fines, four years of probation, and 24 hours of community service.

One year later, a warrant was issued for Stephanie’s arrest after she failed to pay her fines and also did not perform any of her community service hours.

In February of 2014, the warrant was served and Stephanie was arrested for a probation violation. She was sentenced to 15 days in jail in lieu of community service. The other stipulations of her probation remained intact.

Here are Stephanie’s mug shot photos from both arrests: 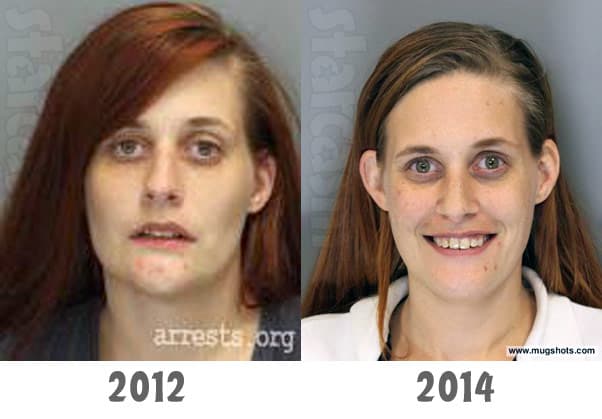 If you’re curious about how Stephanie handled taking care of her three children during this time, it appears as though she wasn’t. Radar Online recently uncovered court documents indicating Stephanie did not have custody of her children, and she got behind on child support — like WAY behind.

A Petition for Registration of Foreign Judgment filed in Monroe County Circuit Court in Tennessee on April 20, 2016 indicated that Stephanie owed $21,384.16 in child support. The was the most recent of a string of filings that began in Georgia in 2008.

However, it appears that the actual amount Stephanie owed may have been a bit lower than $21,384.16. From Radar:

Stephanie then filed an Answer to Petition for Registration of Foreign Judgment. “She does not deny being in arrears with the State of Georgia as of the entry of the Order setting the same at $6,305.54 and would show the Court that she has been paying on the same regularly and but for the lack of information being made available by Georgia DCS to date may have satisfied the bulk of that arrearage,” the court papers read.

An agreed order revealed, “This matter only pertains to the $4,176.84 in arrears owed to the state of Georgia.” A judgment was granted in that amount.

She agreed to pay $50 a month in past due child support.

If you’re curious who had custody of the three children, it is a woman with the same last name as Stephanie — which I am guessing is her mother?

Meanwhile, Rachel Beaver and her family are currently dealing with some of the controversial scenes from this week’s episode of Teen Mom: Young and Pregnant. In the episode, Rachel’s 19-year-old sister Malorie stayed out all night partying while her infant daughter Emerson remained in Stephanie’s care. Stephanie attempted to contact Malorie numerous times when she was late to arrive the following day, but Malorie seemed dismissive and unconcerned.

Pregnant Rachel called Malorie out for bad parenting, and a fight broke out between the siblings. Here is the full scene:

Incase anyone missed it, here’s some more Rachel and Malorie trashiness, including them arguing about who’s a bigger slut from r/TeenMomOGandTeenMom2

NOTE – If you are on a mobile device you may need to select full screen before viewing.

Malorie took to Twitter to respond to those criticizing her parenting on the episode:

Let’s get one thing straight, I love my daughter. I have ALWAYS loved my daughter. There was a point in time where I had EXTREME postpartum depression and my family knows that. I didn’t want to get help and I didn’t want to fix the problem at the time. I was running away from everything and everyone.

I am not proud of what I did and I am not proud of how I did things. I knew that my daughter at the time would be better off with my mother than me. That’s why I did what I did. And it hurt me to know that I couldn’t take care of her like I should. I partied and so forth to escape the fact that at the time I wasn’t good for my daughter because I do struggle with a few mental problems and my postpartum just amplified them. I am not ashamed of having to give her to my mom for a while nor embarrassed. I’m just ashamed of what I was doing instead.

#TeenMom #YoungAndPregnant Who is the father of Rachel's baby? Is it her ex Drew, or is it Drew's best friend Jacob? Here's all the information we could find! ❤️???️‍♀️ https://t.co/WlpjG8YAao

If anything I hope that girls who are young moms and are struggling with the same thing see this and know that it’s ok to feel like that but to get help instead of running away from it. It took me months to get over on my own. I raised her from 0-6 months by myself and cracked after that. But my daughter was safe and happy at all times. There was never a time where I left her in situations she shouldn’t be in. She was always with my family.

So instead of telling me I should get rid of her, I should kms for being such a bad mom, I’m a worthless pos. Try understanding that I had my reasons. And it wasn’t handled in the best way but I have changed. I have my daughter every day there’s never a moment I’m not with her. And I’m her favorite person and I am now better suited to take care of her. I love my daughter and she loves me. She is safe and happy. That’s all that should matter.

You can keep up with Rachel, Malorie, and Stephanie with new episodes of Teen Mom: Young and Pregnant airing Tuesday nights at 9/8c on MTV.