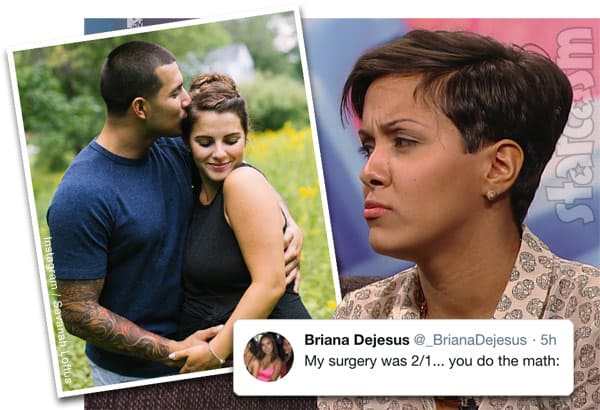 Teen Mom 2 dad Javi Marroquin and girlfriend Lauren Comeau welcomed their first child together last week, but Javi’s ex and Teen Mom 2 co-star Briana DeJesus has put a bit of a damper on the couple’s joyful time by hinting that perhaps the baby was conceived before she and Javi called it quits for good back in February. Lauren has since responded to Briana by letting us all know exactly when she and Javi conceived in a video interview sitting on a couch with Javi and their newborn.

“I’ll tell you the day I conceived! March 10,” Lauren tells Radar Online (video below). “We know the timeline,” she insists, as Lincoln interrupts with a question. “We know when we conceived. We haven’t seen each other in February.”

Javi says he saw the alleged cheating chatter making the rounds on social media, but decided to take the high road. “People are dumb,” he says. “I saw it all over Twitter. I didn’t respond because I was, like, ‘It is what it is.’ I’m not going to ruin my time enjoying time with my son,” Javi says, as the camera pans down to show baby Eli on his lap. “I’m not going to even go into it,” he goes into it.

You have been a mom twice now. You’ve had crappy pregnancies. You have been dealing with issues. You haven’t had the support during your pregnancies. Why would you wish that on a first-time mom? You have no issues with me. We’ve never had any issues, you say you’re completely moved on. Just out of respect for me as a first time mom, let me enjoy this moment. Don’t take it away from me. That’s where the biggest frustration is. It’s just stupid and frustrating because we know the truth.

Lauren and Javi are asked if they are over the brutal Javi proposal to Briana that was featured on the show, and Lauren says “Yes” before then adding that he “did it for the checks.”

In case you missed it, Briana tweeted soon after the birth of Eli by responding to those speculating on the timeline: “February 1st was the day of my surgery. For those who keep asking LOL.”

Briana later tweeted a Hollywood Gossip article titled “Briana DeJesus to Javi Marroquin: Congrats… On Being A Cheater!” and added her own caption of “My surgery was 2/1… you do the math.”

After Lauren and Javi’s interview was posted, Briana returned to Twitter to respond and clarify some things: 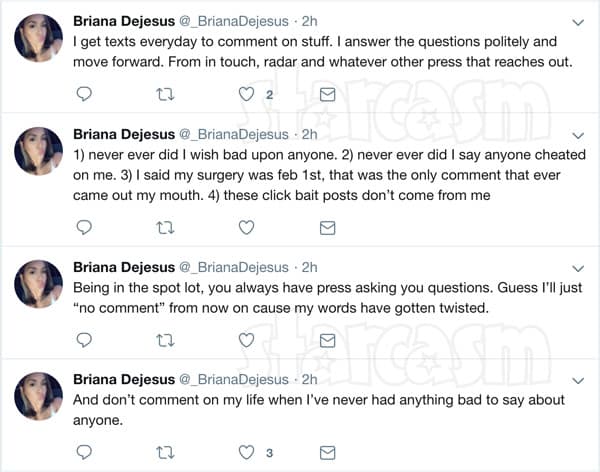 Briana implies that she actually provided quotes to some news outlets, but I’m not sure what those were.

At Briana’s request, we decided we would “do the math” so to speak, which essentially means constructing a timeline of Javi’s bed surfing activities from December of last year until March of this year — which is kinda like playing a rather adult version of Whack A Mole. Here is the result, with some additional dates added for context:

JANUARY 8 – Lauren stops off in Javi’s hometown of Dover, Delaware for a workout at the Cross Fit gym he frequents. Lauren was on a road trip from her former home state of Maine to where she was living at the time in South Carolina.

JANUARY 16 – Javi and Briana break up over her decision to return to Dr. Miami and have her procedure broadcast on Snapchat and MTV.

FEBRUARY 1 – Briana has her surgery with Dr. Miami, which Javi crashed as he professed his love for Briana. He pleaded with her to try to make their relationship work, but he kind of sabotaged his own agenda when he announced to Briana: “I have someone saying they will move to Dover for us to give it another shot.”

MARCH 10 – Javi and Lauren had sex and conceived their son Eli, who was initially due in December, but arrived weeks early due to Lauren reportedly being diagnosed with preeclampsia.

MAY 30 – Javi and Lauren announce that she is pregnant.

JUNE 25 – Briana is asked about the pregnancy during an appearance on the Teen Mom 2 After Show:

“I know she’s, like, six months pregnant,” Briana said. “Me and him just broke up in February,” she added. Co-host Nessa asked Briana if she thought Javi cheated on her. “I’m 99% sure,” Briana responded. 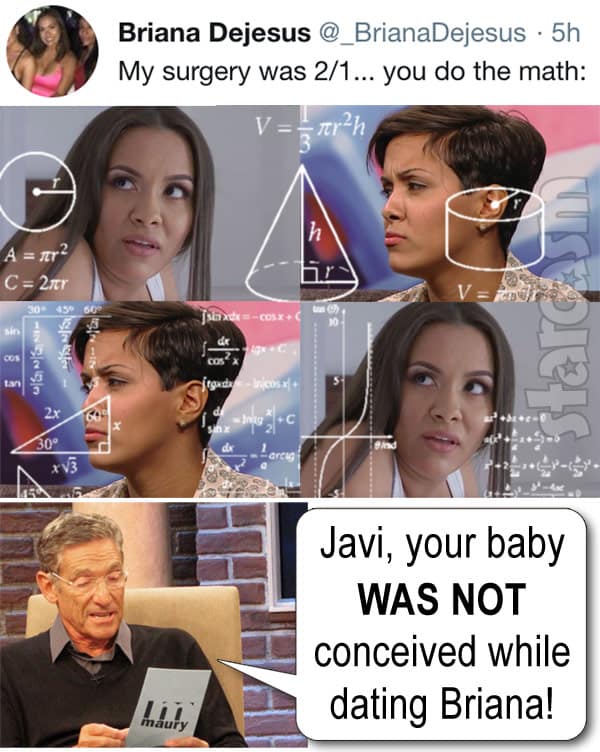 There has always been speculation that Javi and Briana’s relationship was just for the cameras, or “for the checks,” as Lauren described the proposal, but is it possible that Lauren was in on it from the get go and the two of them never actually broke up? Normally I would consider that sort of speculation to be over-reaching, but given Javi’s face palming comments to Briana about having a rebound in the wings waiting (and Lauren being OK with that, even after the episode aired) combined with his history of reality show thirst, I have to wonder. Of course, none of that would explain why Javi and Kail hooked up at some point.

Regardless of all the conception timeline drama, congratulations again to Javi and Lauren on the birth of Eli! Whatever their rocky road has been to this point, they do seem to be on stable ground and making their way towards a happy future together. I wish them the best!