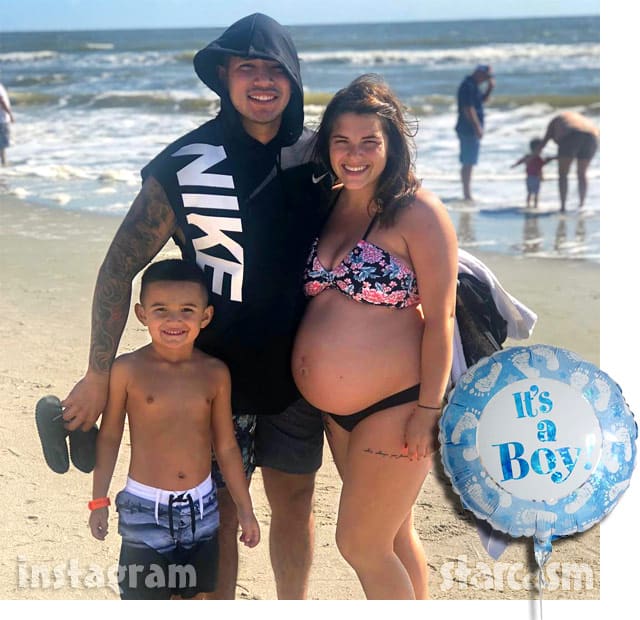 According to Radar Online, Lauren welcomed the couple’s first bundle of joy together at 3:09 PM at Dover Kent General Hospital in Delaware, which was weeks before her due date next month.

UPDATE – CHECK OUT TONS OF PHOTOS OF JAVI AND LAUREN’S BABY BOY!

Javi tells the site that “Mom and baby are doing great,” and reveals that he was present for the delivery, as was Lauren’s mother and sister-in-law.

Lil Papi weighed six pounds and thirteen ounces. And I say “Lil Papi” because Javi and Lauren are taking a page from his ex Kail Lowry’s book in that they have yet to decide on a name for their new addition.

And speaking of Kail Lowry, when Javi spoke with Radar, he said that she and their son Lincoln were on the way to the hospital to meet Lincoln’s newest little brother.

UPDATE – Javi and Lauren have since revealed the name for their son! They have chosen Eli Joseph Marroquin. “Joseph after my dad, who goes by Joe, and my grandfather’s middle name,” Lauren tells Radar. She says that the middle name was decided on months ago, but Lil Papi’s first name came about very recently. “The first name has rotated like every month or so,” Lauren says. “I really wanted to name him something that could be shortened to a nickname, but we love Eli by itself.”

Javi said of being present for Eli’s birth: “I even shed some tears! For those that don’t know, I’m not an emotional person anymore at all and just seeing my son come out really had me in my feelings.”

The birth announcement comes fresh on the heels of Javi revealing that he will be entering the ring to compete in a celebrity boxing match scheduled for February in Fort Lauderdale, Florida. Javi’s opponent has not been named, but I’m going to put my money on fellow Teen Mom 2 dad Nathan Griffith — if only because Nathan already has some experience in the ring.

In case you missed it, Javi got introduced to the world of celebrity boxing when he took the job as ringside commentator for the Farrah Abraham boxing match that ended up not featuring Farrah Abraham.

But enough about celebrity boxing! Let’s get back to Lil Papi. What do you guys think would be a good name for Lincoln’s little brother?