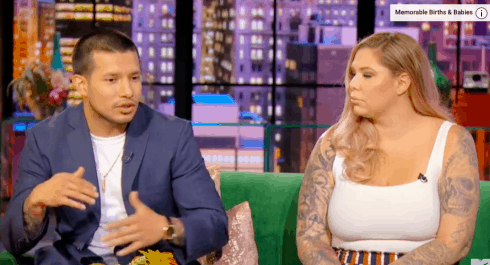 Javi Marroquin is expecting a baby with girlfriend Lauren Comeau, but on the Teen Mom 2 reunion tonight Javi reveals that he’s been hooking up with ex Kail.

“Every time I try to move on, she kind of reels me back in as far as we cross those boundaries, and we cross those lines,” Javi explains while Kail looks incredulous.

Of course, with Javi starting a new family, when this hookup occurred carries a lot of meaning. Kail acts like she doesn’t remember when, but Javi says “Of course I remember.” It’s then confirmed that the hookup happened sometime in the last 6 months.

Javi explains that Kail asked him to go upstairs, and so he said “Ok, let’s go!” The question comes up about who he was actually dating at the time of the Kail hookup, and this is where Javi loses his memory.

Given the time frame it could be his current girlfriend Lauren, who he recently bought a house with OR it could be fellow Teen Mom 2 cast mate Briana DeJesus. Either way, he suggests he was with someone when he and Kail hopped in the sack again.

Kail has said a few months ago that she wouldn’t ever get back in a relationship with Javi, but it sounds like hooking up with him is still not off the table.