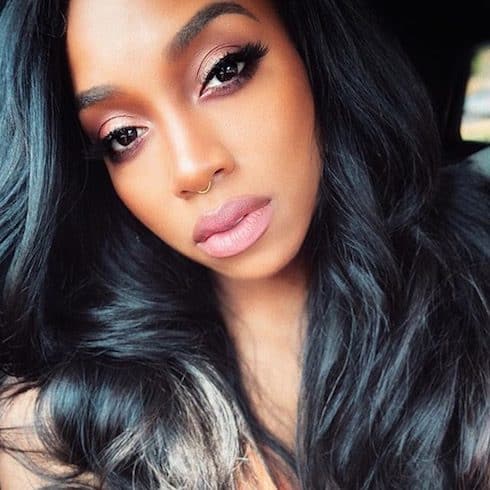 Love & Hip Hop Hollywood Season 5 just ended, but it looks like at least one cast member may be trying to get a head start on her storyline for next year. Is Brooke Valentine pregnant? Gossip is swirling about the LHHH star, who’s said to be carrying boo Marcus Black’s child. But Brooke also has a new single out, so this could be mere promotional tea and nothing more.

The Jasmine Brand was the first to report the story. According to their sources, Brooke is “allegedly pregnant by cast mate Marcus Black.” Their article also points out that, while “it’s only speculation” right now, Brooke has made “few public appearances” of late. (And we’ll point out that TJB is usually pretty accurate when it comes to Love & Hip Hop gossip.)

Brooke and Marcus reaffirmed their relationship at the LHHH Season 5 reunion, so if Brooke is pregnant, it seems likely enough that the baby would be his. Love & Hip Hop Hollywood just got through playing a season-long, ultimately tedious game of cat-and-mouse over who Lyrica’s baby daddy really is, so hopefully the producers wouldn’t try to pull the same thing with Brooke’s baby daddy for LHHH Season 6.

A better way to tell if Brooke is expecting is to consider her social media posts over the last few weeks. The last two Love & Hip Hop stars to reveal their pregnancies on the show shared way fewer photos of themselves while pregnant — and almost all of those pics were from the chest or neck up. Lyrica was almost completely absent from her otherwise popular Instagram feed before LHHH made her pregnancy official. And Starcasm broke the news of Jessica Dime’s pregnancy before the LHHATL Season 7 premiere thanks partly to the fact that Dime had been off IG for weeks.

With that in mind, here are Brooke’s two most recent full-body social media shots. She shared the first on November 12, though the pic could have been snapped earlier than that:

And here’s the next-most-recent, from November 5th. If you’re really motivated, you can maybe spot just the tiniest hint of a baby bump. Again, though, this photo could have been taken well before November 5th and simply shared on that date. And since not even gossip claims to know how far along Brooke is, it’s possible she’s not showing at all:

There’s also one more possibility. Brooke just dropped her new single, “Swear to Gawd,” also featuring Bridget Kelly. Since Love & Hip Hop Hollywood is on a break, this pregnancy gossip could just be Brooke or her PR crew publicizing the single:

On that note, you can buy “Swear to Gawd” here.

Filming for Love & Hip Hop Hollywood Season 6 is expected to begin in early 2019.