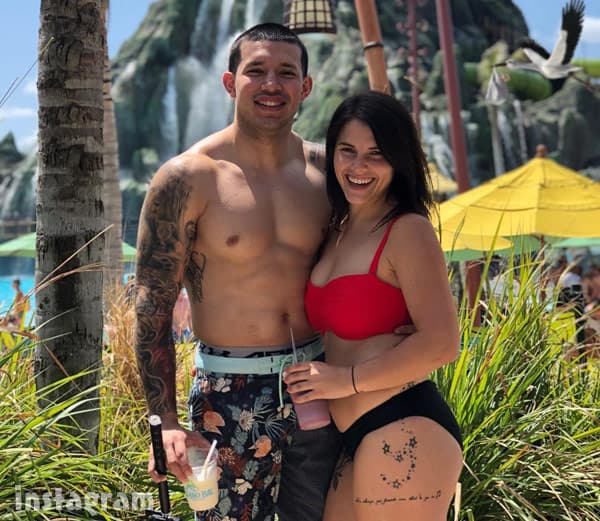 The moms and dads of Teen Mom 2 are giving the Duggars a run for their money as far as the number of pregnancy announcements! The latest star of the show expecting an arrival from the stork in the coming months is Kailyn Lowry’s ex husband Javi Marroquin, who just revealed that his girlfriend Lauren Comeau is pregnant with his second child, her first!

The news initially broke on Javi and Lauren’s (#Javren? #Lavi?) personal Facebook pages where the two posted pictures from a recent maternity photo shoot that included Javi’s son Lincoln. In one of the sets, Javi and Lincoln are wearing shirts that read “Ice” while pregnant Lauren completes the Vanilla Ice lyric:

Javi shared another photo from the shoot on his Instagram, but this one made no reference to two-hit-wonder white rappers from the late ’80s:

25-year-old Javi captioned the photo by expressing his wariness about making the announcement as well as his appreciation to all those offering congratulations:

Been kinda quiet lately for many reasons. I was sad I couldn’t share the good news because I was afraid of what people would say. The amount of love I’ve received is so overwhelming and so appreciated. I realized No negative comment will take this moment away from us. A baby is a blessing and I am ecstatic for the future. Lincoln is happy, I’m happy, and Lauren is happy. Gonna go on a little hiatus from social media to take all this in and enjoy it with my family and loved ones. For those sending love, thank you! We appreciate it. And to you [Lauren] thank you for blessing me with another child. We are gonna be amazing parents together

And thank you @jonlloydjr capturing this moment for us

Kind of a relief the secret is out. Thank you for all the love. Really for everyone 1 troll there’s 2047261 amazing people out there. Thanks

Omg why is everyone saying a girl ??? I’ll love boy or girl but idk if I can handle a girl

Javi and Lauren dated briefly from July to September of 2017 before Javi and his Teen Mom 2 co-star Briana DeJesus began their ill-fated relationship. After #Javiana imploded, Javi and Lauren got back together in March, despite the fact that she currently lives in South Carolina.

Unlike Briana, it appears as though Lauren is ready to make the move to Delaware. “We have a solid plan of when she is coming to Delaware!” Javi told Us Weekly after the pregnancy announcement. “As of now we’re enjoying this first one before we even think of anymore kids.”

Javi also revealed to Us that he was a “little nervous” about telling his ex-wife Kail the news. “Linc knew, so I didn’t want him spilling the beans before I did, but she took it well and I think we’re both at a point in our lives where we are happy for each other,” Javi said.

Kail reacted to the pending pregnancy by simply stating: “I wish them the best.”

And how about Javi’s other Teen Mom 2 ex, Briana DeJesus? Her statement was a little less simple, and would register at least a small “BEEP!” on most shade detectors. “I’m happy for them. I wish them nothing but the best,” Briana told Us. “I don’t wish it was my baby. … All he wanted was a family and he got it. So good for him. Like I said, I’m sending my best wishes and have no hard feelings.”

Javi and Lauren already have a gender reveal idea in the works, and he says it includes Lincoln.

Congratulations to Javi and Lauren!

On a side note, this post had me reminiscing about the very first post we did about Javi waaaay back in December of 2011. At the time, he was still Kail’s “mystery man” who had made the trip with Kail from Pennsylvania to Fayetteville, NC to participate in a signing event with Jenelle Evans. (More photos of the after party here.) Kail and Jenelle had both recently signed with the Life Is Good Agency Group and were just about to embark on “The Road To Redemption Tour” together. Needless to say, the tour never happened. 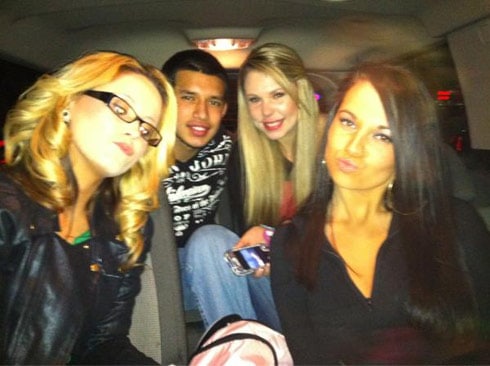 Crazy how time flies, right? (I had totally forgotten that Kail reportedly legally changed her last name to Irwin?!)

David Eason says Jenelle did not get her tubes tied, buys her a surfboard as a get well gift