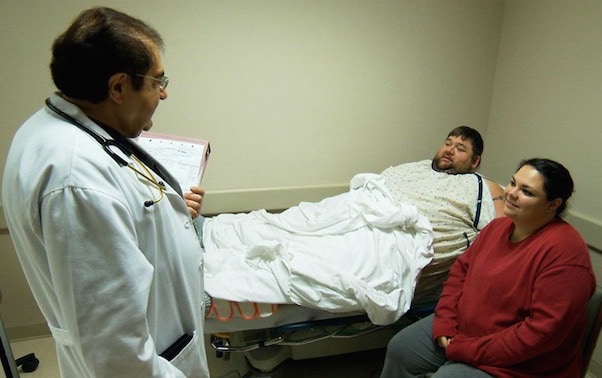 It’s been a pretty turbulent year for My 600 Lb Life star Gideon Yeakley. As we were the first to report a couple months back, the first part of Gideon Yeakley 2019 saw the Season 4 cast member hospitalized for several days. But, after suffering through the prolonged battle with his mystery ailment, Gideon is now back home with his family — and celebrating a huge new milestone.

Gideon’s introduction to My 600 Lb Life viewers came back in 2016. At a peak weight of 650 pounds, Gideon knew he was placing a severe strain on his wife, Kayleigh, and their son, Johnny, both of whom acted as caregivers. And while Gideon’s weight loss was steady, his problems actually grew post-surgery: Gideon went through an extended bout of depression thanks in part to the low energy he felt while sticking to his diet.

Fortunately, as Gideon’s weight loss increased, his mood improved. By the end of his My 600 Lb Life episode, Gideon had lost 221 pounds, dropping him down to 429 pounds. And it was only a few months later that Gideon revealed on social media he’d lost around hundred *more* pounds since the cameras stopped rolling, telling one follower he had lost “almost half of his starting weight.”

That was hardly the only reason for happiness in the Yeakley household, though. In the late summer of 2017, Kayleigh gave birth to a baby girl. The proud parents have kept quiet about their daughter’s full name, but have shared that her first name is Frankie.

Which brings us to Gideon Yeakley 2019. This past February, Gideon had to be hospitalized after passing out and collapsing while at work. For the first few days of Gideon’s hospitalization, doctors were baffled as to what was bothering him. Evidence of internal bleeding led to more concern; compounding the problem was the fact of the hospital staff being overworked: “The hospital is at max capacity,” Kayleigh explained, “so they’re running around like chickens with their heads cut off.”

Neither Kayleigh nor Gideon have since revealed the exact cause of his hospitalization. (We should also point out, though, that an earlier update from Kayleigh revealed a normal EKG, meaning that nothing was wrong with Gideon’s heart.) But, judging by their recent updates, it seems that things are back to normal for the couple. They celebrated the new year by sharing a pair of before-and-after pics, which we’ve compiled below. The photo on the left is of Gideon and Kayleigh in 2010; the one on the right is of Kayleigh and Gideon Yeakley 2019:

“I would say we’ve aged fairly well,” Kayleigh captioned the photos. And she added the hashtag #glowup.”

In even happier news, here’s the most recent photo of Gideon Yeakley and family — from Kayleigh’s college graduation! “I have wanted to be a counselor since I was 12 years old,” Kayleigh wrote upon sharing the pics from her big day, “and today brought me one step closer to achieving just that.”

Here’s Gideon, Frankie, Johnny, and Kayleigh after the University of Oklahoma’s graduation ceremony this past weekend: 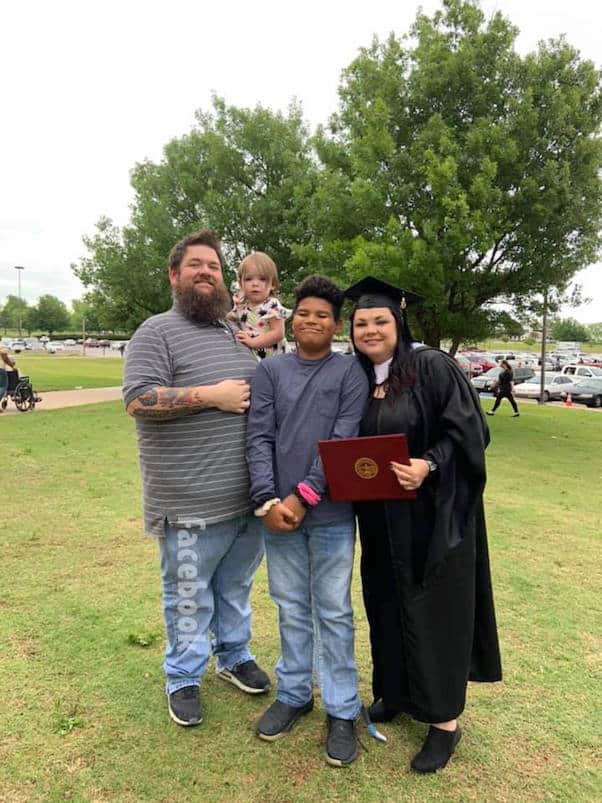 As for whether we’ll get an official follow-up on Gideon’s weight loss journey? It’s been a full three years since his My 600 Lb Life debut, and he’s yet to feature in a Where Are They Now? episode. In fact, Gideon is one of only three My 600 Lb Life cast members from the first four seasons who have never appeared in a second episode. (Season 3’s Amber Rachdi and Gideon’s Season 4 castmate Randy Statum are the other two.) So it’s possible that that ship has sailed — something that would also explain why Gideon shares full-body pics on social media.

In any case, you can still revisit Gideon’s 2016 debut episode here, via TLC.

PHOTOS MY 600 LB LIFE Michael now: Are he and Roni Dominguez still together?