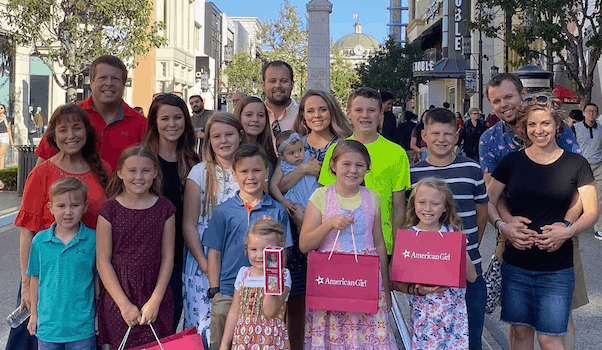 After a weekend filled with gossip and uncertainty about an alleged Duggar home raid, we’ve gotten surprise confirmation that federal agents were at the family’s compound as part of an “ongoing criminal investigation.” The Duggars — seen above giving American Girl dolls an exceptionally ill-advised plug — have been the subject of plenty of rumors about what Josh may have done this time. And, though details remain scarce, it seems there really was a federal appearance of some sort at the Duggar compound this weekend.

(UPDATE – It turns out that the raid wasn’t actually at the Duggars’ *house* — it was at Josh Duggar’s increasingly infamous used car lot. Click here for the latest in both gossip and the meager public facts of the investigation.)

There’s a fair bit of hair-splitting going on in this story, so we’ll try to keep it as simple as possible. Yesterday, we published a lengthy examination of all the gossip and chatter about the Duggar home raid. At the time, it was said to have been triggered by something involving Josh Duggar and a violation of either child labor laws, sex trafficking laws, or fraud. (We should point out that no specific Duggars have yet been named as the target of any criminal investigation by anyone in a position to know: as we pointed out in our article, Josh is simply the easiest and most convenient target for speculation.)

The first split hair was over the agency conducting the supposed Duggar home raid. All gossip suggested the FBI — again, for no clear reason — and when the agency issued a denial, the story seemed to be dead.

But last night, Fayetteville AR-based news station KNWA confirmed that there really had been a weekend investigation at the Duggar compound. According to their article, a spokesperson for Homeland Security Investigations acknowledged the federal agency’s recent presence at the Duggar home.

Said the spokesperson, “[I do not dispute the information that] HSI was present there pursuant to an on-going federal criminal investigation.”

In a move that’s already stoking those speculative fires, the HSI spokesperson declined to say exactly why agents had been rooting around in the Duggars’ stuff. And the US District Attorney for Western Arkansas also “will not comment on the incident.”

Back to hair-splitting: the second instance seems to be the Duggars themselves taking issue with the word “raided.” The family issued a denial of the KNWA story shortly after it went up, and straight-up called the report “not true.” But if you’ve read denials for any appreciable amount of time — whether they’re from reality stars or politicians — you’ll recognize this tactic.

Here’s the family’s statement on the Duggar home raid, first posted on their official Facebook page:

We were shocked to see a news report today state that our home was raided by federal law enforcement agencies. This is not true. To the best of our knowledge, it’s also not true that any member of our family is the target of any investigation of any kind. Living a life in the public’s eye has taught us that it is best not to reply to every rumor and piece of “fake news” that is circulated online. It would be a full-time job if we attempted to do so. However, because of tonight’s media coverage we thought it is important to address this rumor with you. Thank you for the love and support that we can always count on in you our fans and friends.

Note also that the HSI spokesperson never used the words “raid” or “raided. Those are simply the most dramatic and oft-used with regard to this story. But if a couple carloads of federal agents knocked on your door, came into your living room, asked you a few questions, and took some of your stuff back with them, while never acting quite like the Hollywood depiction of such agents — why, you’d have plausible deniability when it came to issuing your own statement on the matter. You might have felt threatened, sure, but that doesn’t mean you were “raided.” A raid suggests speed, threats, violence. If the agents came over for an interview, you could write the whole thing off as nothing more than a visit and some coffee. That is, if you were at all concerned about a network’s opinion of your family and its activities.

Currently, the only public Duggar lawsuit involves Josh and some allegedly shady real estate doins with his used car lot. Technically, that could fall under HSI’s mandate, though it doesn’t seem likely. And if you’re like me and had never heard of Homeland Security Investigations before this story broke, here’s a quick explainer. The agency is a branch of ICE; it claims “broad legal authority to enforce a diverse array of federal statutes” involving “cross-border criminal activity.”

How diverse, you ask? Here’s the agency’s own to-do list:

Those are all very serious crimes, and I don’t want to make light of them. But I do want to say that if it turns out Josh Duggar has been spending time since the molestation scandal developing his skills and reputation as an international art thief, I will be genuinely surprised. Maybe he thought he could do Walter White one better and so he bought the used-car lot as a front for his own devious schemes. It’s hard to see Josh shimmying underneath a museum laser to swipe a Rembrandt in the dead of night, but a blogger can dream.