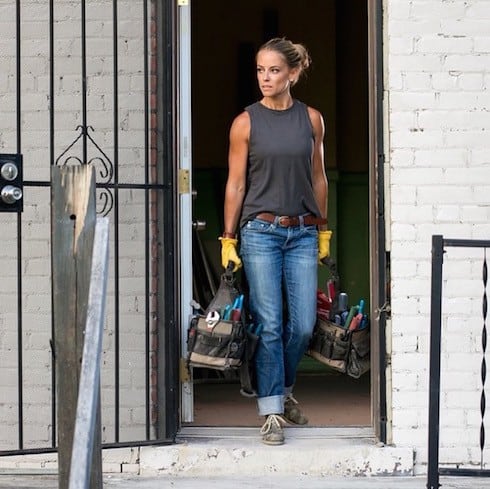 Rehab Addict’s Nicole Curtis has been a full-time professional for over half her life, but still has to deal–on a daily basis–with the public perception that she doesn’t *really* do the work involved in renovating and restoring the old houses featured on her show. In fact, one of the most popular questions asked about Nicole has nothing to do with her background or show, but is simply: Does Nicole Curtis from Rehab Addict really do her own work?

Now, to be fair, some of the people asking that question do so because of the still-widespread belief that reality TV isn’t “real.” We’ve written similar articles about Joanna and Chip Gaines from Fixer Upper, Drew and Jonathan Scott of Property Brothers, and Tarek and Christina from Flip or Flop–and that’s just counting HGTV shows. Broadly speaking, the belief that reality shows are actually fake is alive and well, even for those in the home improvement category.

But one thing it’s important to remember is that any high-profile, flagship-type reality star has to put in a *ton* of work behind-the-scenes, doing things that have nothing to do with the premise of the show and everything to do with its promotion. Recall that, immediately before jumping into production on Rehab Addict Season 8, Nicole was reviving interest in the dormant show with her Better Than New book tour. The recurring #FindYourFire grant project for young builders is another example of extra work. As are Nicole’s ongoing #TeamTessa fundraisers–though, as anyone who’s followed Tessa’s story knows, those are more about generosity and giving back than they are Nicole Curtis or Rehab Addict.

With that in mind, we thought we’d put together a gallery of some of Nicole’s social media updates throughout the filming of Rehab Addict Season 8, in order to try better informing some of that public perception. For example, earlier this summer, Nicole took the opportunity to point out something important to her many fans (and no doubt to her detractors as well): a lot of the public’s opinion of any celebrity, whether a reality star or a movie star or something else, is based largely on promo shots and commercials. And, where reality stars are concerned, those photos and videos are taken in environments vastly different from the actual day-to-day work space for Nicole and the rest of the Rehab Addict crew:

Wait for it, wait for it ……. ##Please note this is a promo ! Not how I really work—if that isn't obvious because 1. My hair is clean and looking fabulous 2. There's 3 cameras on me 4. There's someone telling me what to do 5. I only said one f word 6. I gracefully fell thru wall 🙂 #rehabaddict #hgtv

Then there was the time that Nicole found time to lay down a sweet Model T driveway in between marathon sessions cleaning up after the sloppy tradespeople on her crew:

Another fun day at work and look what we built !!! #modeltdriveway #season8 #rehabaddict #lakeorion

Or the time she kept up morale on set with “9 to 5” dance parties and good cheer (again, in between planning and executing all the “kick-ass new projects” Season 8 has in store):

We are back tonight !!!!! And yes, we really have this much fun. So proud of my crew 🙂 #rehabaddict #nicolecurtis

Or the day, just before quitting time on a 12-hour day, that she committed to an even longer project because the excitement of discovering a new approach was too great to ignore:

Or, y’know, how about going back to work at ten o’clock at night just because she was almost finished with one house and couldn’t wait to wrap everything up. (And apparently because the yard needed mowing? Seriously, no one can say that Nicole Curtis is not a 100% team player who gives 110% every day.)

Plus, as anyone who’s kept up with the ongoing breastfeeding controversy that follows Nicole like a cursed puppy, putting up with ignorant men is hard work, too:

All of which is to say that, yes, Nicole Curtis really does do her own work on Rehab Addict. But she doesn’t always stay on the job site 100% of the time every day, because there are antiques to find at flea markets and commercials to shoot and interviews to give and social media updates to film for her million-plus followers, to say nothing of countless other business details and annoying bureaucratic problems to sort out. (There’s also a toddler to raise, in case you forgot about all that.)

So, the short answer to the question is “More than most people realize.” But, having said all that, Nicole certainly seems happier than we’ve ever seen her–and seems overjoyed to be filming her show again. Ultimately, for her many fans, that’s all that matters.

Speaking of which, Rehab Addict Season 8 airs Wednesday nights at 9 on DIY.

(Photo credit: Does Nicole Curtis from Rehab Addict really do her own work via DIY)