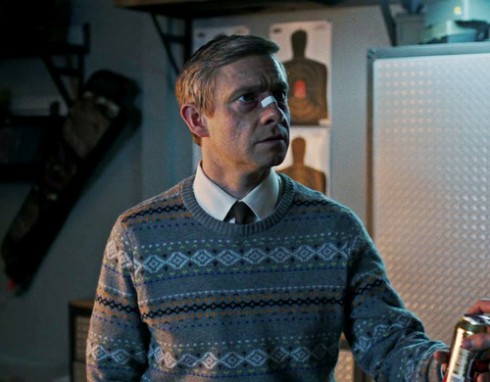 We’re two episodes into FX’s Fargo TV series adaptation starring Martin Freeman and Billy Bob Thornton, and we’re hooked. Just like the film, it’s a crime-comedy set in Minnesota that plays up the possibility of dark secrets behind everyday niceness. Both the 1996 Coen Brothers movie and the TV series start out with a declaration that the events depicted are “Based on a true story.” Is there really a true crime inspiration for either?

The Coen Brothers worked very hard to keep the spirit of that question alive. At the March 1996 premiere, Joel told reporters “we wanted to try something based on a real story, and tell it in a way that was very pared down.” He also said the script was “pretty close” to what actually happened. But to muddle things a big, the screenplay for the movie was published later that year, Ethan Coen wrote in the introduction that their movie “aims to be both homey and exotic, and pretends to be true.”

The truth is sometimes fuzzy here, as it often is with fiction. Fargo the film is not a reenacted event from an actual case in Minnesota, like Foxcatcher, but there are some events that inspired and informed it. One of the most notable ones involved a Conneticut woman who was bludgeoned to death by her police officer husband of 10 years, frozen, and then fed into a brand new wood chipper he bought for the occasion. When questioned by the police and others, he sometimes said his wife had gone to Germany, and other times claimed he had no idea where she went.

After Fargo was released, another death became part of the Fargo lore. The body of a woman Takako Konishi was found in a forest near Detroit Lakes, Minnesota. After her death a rumor spread that the woman died trying to find the briefcase of money that was buried in the snow in the film. According to locals, she was talking about the movie and mentioning the character’s names, but her English wasn’t very good and it turns out the Fargo reference had just been a misunderstanding. She had just lost her job and traveled to Minneapolis where she used to go with her ex-boyfriend, and later committed suicide with an overdose of alcohol and sedatives while wandering around Detroit Lakes.

Like the film, the engrossing TV series is not inspired by a single event, but by many. And it’s not worth missing.

Who is Andromeda Dunker, the narrator of House Hunters?