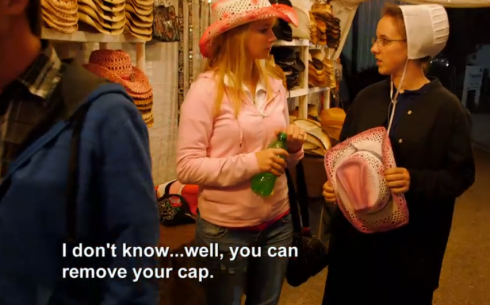 One of the best parts of Breaking Amish (reunion special part 1 airs tonight at 10 EST) is when they start speaking to each other in their own special language. It doesn’t leave out the audience because there are always subtitles, but it’s pretty interesting to hear this different language people speak in pockets of the US. Sometimes the words seem familiar to English words, and that’s because they are both Germanic languages So, what is this language?

What we’re hearing is a German dialect mostly known as Pennsylvania Dutch or Pennsylvania German. Calling it “Dutch” doesn’t mean it is connected to the Dutch language, instead it mostly comes from a German dialect called “Deitsch.” One explanation for this confusion is that when the Pennsylvania German region was settled by Europeans from Rhineland, Switzerland, Tyrol, and other starting in 1689, Germany (or Deutschland)) wasn’t a country as we know it to be today.

The Amish view Pennsylvania Dutch as one of the things, like their clothing and their horse-drawn buggies, that set them apart for the outside, or English, world.

It’s not a written dialect, so there aren’t any Pennsylvania Dutch translations of books, but Bibles and the Amish songbook the Ausbund are written High German. Occasionally people try to transcribe Pennsylvania Dutch, but it can be difficult because there are no set spellings for the language. The dialect is different than most of the language spoken in Germany, but they can engage in limited communication with Germans from the Palatinate region.