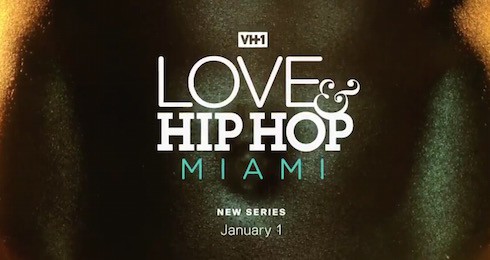 VH1 had already announced that Love & Hip Hop Miami, the fourth entry in the vaunted LHH franchise, would premiere some time in January 2018. Most observers–including this one–seemed to think that a late January premiere was likely, given that Love & Hip Hop New York‘s eighth season only premiered on October 30, and most LHH seasons run about 14 (ish) episodes, plus a reunion special.

Well, it looks like those observers were all wrong–and that VH1 is incredibly anxious to get its newest show on the air. When does Love & Hip Hop Miami come on? Clear your New Year’s Day schedules: the first episode of LHHMiami drops on Monday, January 1st.

To celebrate the announcement, VH1 also released a brand-new teaser trailer for the series. It doesn’t really *show* us anything new, though it does give us some new things to listen to:

We're heating up your winter with the SERIES PREMIERE of #LHHMIA MONDAY JANUARY 1 on @VH1! pic.twitter.com/KONfIfNtO2

Plus, in case you missed it, here’s the debut Love & Hip Hop Miami trailer, featuring 60 seconds of humid goodness:

*And*, beyond all those names, we’ve reported on rumors that three other LHH alums may be making guest appearances over one or more episodes. Joseline Hernandez is said to be in talks for a guest spot, as is former LHHATL star K. Michelle. Current LHHATL cast member Lil Scrappy was apparently scheduled to jump over to the LHHMiami cast following ATL’s sixth season; thanks to his secret marriage to Bambi, it’s believed that those plans are on hold.

The only obvious loser here is actually the eighth season of LHHNY. There are a scant eight more Monday nights between now and January 1st–if VH1 plans to air LHHMiami all by its lonesome following LHHNY’s end-of-season reunion (which is standard practice where the franchise is concerned), fans should expect at least two of those Mondays to feature two new Season 8 episodes.

But one of those Mondays is also Christmas, and, traditionally, the network doesn’t air any new programming on Christmas. So it seems possible, if not highly likely, that Love & Hip Hop Miami‘s first few episodes will air at 9 PM, after getting a lead-in from New York.

(Photo credits: When does Love & Hop Miami come on via VH1)