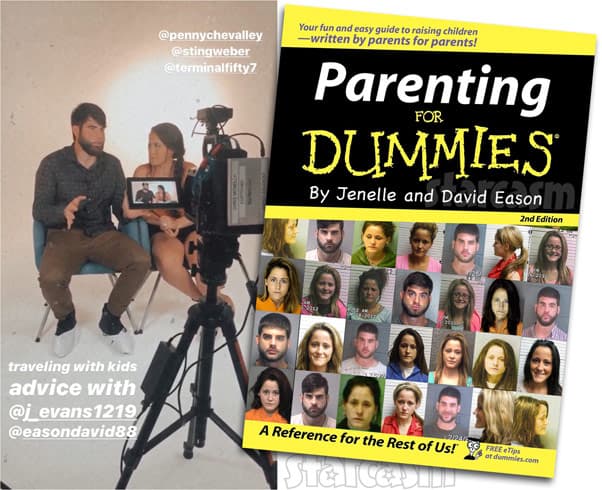 Former Teen Mom 2 star Jenelle Eason has been teasing a new project for months as she patiently waited for her MTV contract to expire. That happened earlier this month, and last night Jenelle revealed that her new project is apparently a series of parenting advice videos with her husband David Eason?

Jenelle posted a behind-the-scenes preview clip from the project in which she and her husband David Eason, who lost custody of all of their children for a period of months last year amid allegations of abuse, offer up advice on “traveling with kids.”

Those who have followed Jenelle and David’s inspirational parenting over the past couple years might assume that their advice would include carrying a loaded pistol in the vehicle at all times in case of potential road rage incidents, or perhaps a lexicon of angry phrases to scream at your children when they act like children during your rustic cabin birthday vacation getaway. However, the new series looks to focus on less exciting tactics.

“You gotta have the iPads charged,” Jenelle says as David blurts out: “We’re not there yet!” for some reason. “You gotta make sure you have games downloaded onto the iPad because you have no internet,” Jenelle continues.

David then starts to talk about “Are we there yet?” scenes from The Simpsons before he is cut off.

Here’s the clip, which was re-posted by @tmmamadrama on Instagram:

Was this her major deal she was talking about landing 😂

There isn’t much more information available about the Easons’ new video project, but I am assuming that it will include their insight and advice on a series of topics — not just traveling with kids.

The Eason brand has become a bit tarnished, to put it nicely, and most all of Jenelle’s business partnerships over the past year have resulted in a huge backlash against the companies that chose to work with her. As a result, pretty much every single one of those partnerships were dissolved, including ones with Blue Plate, PatPat clothing, and the Flirt Beauty Boutique.

“Our salon was unaware of what her and her husband have done or have been connected to, and in no way, would we support such brutality,” Flirt said in a statement announcing that they were backing out as the host for Jenelle’s JE Cosmetics launch party in New York City. “We apologize for not doing our research before hand.”

Despite the inevitable backlash, Jenelle has found a crew of people and companies willing to stand behind her and David on the new project. It appears that the videos were shot near Chattanooga, Tennessee, and most all of the people and businesses associated with the new project are from that area. The list includes the Terminal Fifty7 branding agency and photographer/event planner Penny Chevalley.

Penny shared a photo on her Instagram account yesterday featuring David and Jenelle together. “Created something AMAZING today with these two ❤️,” she boasted. “I can’t wait for you to see the REAL real!”

Penny woke up this morning to a deluge of negative comments and DMs. She posted a video to her Instagram account letting everyone know that she can work with whomever she chooses, and we “don’t get to have an opinion” on what she does. Here’s her full statement from the Instagram story videos:

So, I just woke up. My Instagram is very interesting right now. Ummm, I want you guys to understand something. You don’t pay my bills, so you don’t get to choose who I work with, who I support, or do not support, who I choose to partner with. That’s not your decision. That’s my decision.

I’m a 35- almost 36-year-old grown ass woman with a family. I’ve been through my fair share of sh*t. You don’t pay my bills. You don’t get to have an opinion on what I do. That’s the bottom line. That’s all I’m going to say on the subject. Have a great day, and continue blowing up my inbox.

The internet is certainly going to be disappointed that they don’t get to have an opinion on this.

UPDATE – Penny apparently got a little tired of her inbox blowing up because she has since made her Instagram account private.

Speaking of not having an opinion on Jenelle and David’s new business venture, it seems that YouTuber Grace from The Grace Report did not get the memo. Well, actually she DID get the memo because she re-posted Penny’s video declaration in its entirety on her Instagram page, and then defied Penny’s orders by adding what appears to be an opinionated caption:

Disgraced former #TeenMom2 stars #JenelleEvans & #DavidEason (who temporarily lost custody of all of their kids last year over allegations of child abuse) broke quarantine rules to shoot a backwoods Q&A where they offer….parenting advice. Fans of the show have been attacking the production‘s misguided director, who has since issued a video response to the controversy.

If you’re curious about the brand management company that is working on the project, here is the only video posted on the Terminal Fifty7 Instagram page:

Is Your Marketing Dumb & Stupid?

I’m unsure if I am allowed to have an opinion on their commercial, so I’ll just be quiet.

It’s unclear how long the Easons will be in the Chattanooga area working on their new project. It’s also unclear what the timeline is as far as a finished product — assuming it gets that far. We will certainly be keeping an eye on things (and our opinions to ourselves) and will be sure to update with any major developments.

UPDATES Judge signs off on CPS taking Ensley & Maryssa, Jenelle & David's whereabouts currently unknown, Jenelle responds to CPS taking Kaiser & her relationship status with David, plus Jenelle and her manager attack The Ashley?! It's a long post y'all! https://t.co/UMyR2O7ups

On a side note, I was looking into Penny a bit and something about her seemed oddly familiar. As it turns out, she has A LOT in common with Teen Mom OG star Mackenzie Edwards’ bestie Christan C. George. Not only have both of the photographers befriended controversial Teen Mom stars, but they their photographic aesthetic is very similar. (The dark, warm tones of the images especially.) Plus, they both use Volkswagen bus photo booths?

Here are some photos for comparison:

UPDATE – Penny made all of her Instagram accounts private, so I removed the embeds. 🙁