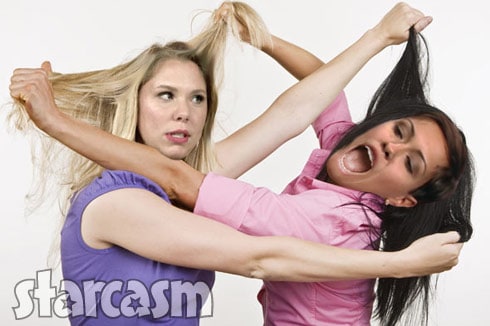 Teen Mom 2 stars Kail Lowry and Briana DeJesus seem to think that Javi Marroquin is worth fighting over because that’s literally what they did while filming together in New York City earlier today.

According to multiple sources for The Ashley’s Reality Roundup, things got heated and a full-on hair-pulling cat fight went down on set. Piecing the narrative together from multiple updates, it sounds as though Kail approached Briana backstage, where there were no cameras, and challenged her to a fight. Security got wind of the tension and swooped in to prevent an altercation. (I’m just imagining the producers freaking out because we all know that if a reality show fight happens and there are no cameras there to see it, then it didn’t happen.)

Producers then suspiciously placed Briana’s sister Brittany behind Kail for an “Unseen Moments” segment. “They didn’t have any security posted by Brittany,” The Ashley’s source reveals. “As soon as Briana came out, ready to fight, Brittany stood up and joined in. Kail turned around to get off stage and that’s when Brittany yanked Kail’s hair.”

That was pretty much it as far as the actual “brawl” went. There are reports circulating online that Kail was punched, but she herself debunked that rumor on Twitter:

Meanwhile, Jenelle Eason and her husband David Eason — who did not attend the Reunion — were quick to gloat and express their joy over Kail getting her “ass beat:” 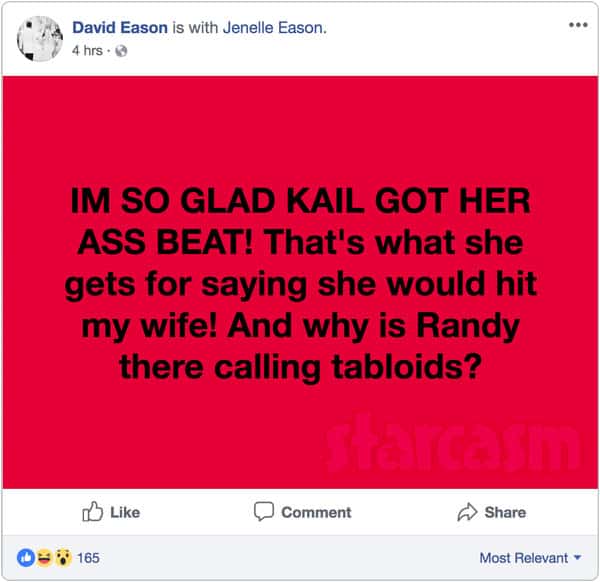 The Ashley reports that Kail’s ex Jo Rivera left New York after the incident and will not return to film for the Reunion. Chelsea Houska was also reportedly upset by the brawl as she is currently pregnant and was worried about potential harm to her unborn baby.

It seems as though both Teen Mom and Teen Mom 2 are going through sort of an identity crisis as the moms have grown older and the show is no longer about the struggles of teen mothers. It seems to be changing into a version of the Real Housewives with the drama between the mothers taking center stage, which of course means that there has to be lots of reunion fighting, trash talking, etc. What do you think about the changes? Are you enjoying the drama between the mamas, or would you rather their own individual stories remain the focus of the show?