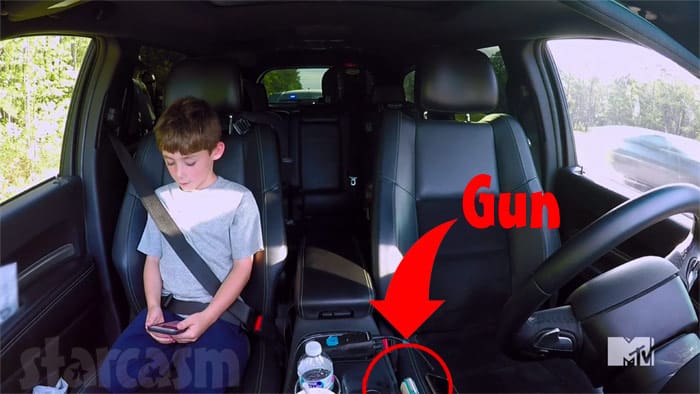 Monday night’s episode of Teen Mom 2 included the highly anticipated road rage incident in which Jenelle Eason followed another driver home and got into a heated argument before pulling a gun on him. The altercation itself lived up to the hype, but all viewers can talk about after the episode aired is what happened when Jenelle left the other driver behind and was pulled over by a state trooper.

To recap the scene, after Jenelle was tailgated and then passed and brake checked by a man driving a Ford F-150 pickup truck (you can see all of that in the preview clip here), she calls 911 and follows the man to his house, even after he pulled off the highway onto a dirt road.

As soon as Jenllee pulls off the main highway, we see her unbuckle her seatbelt and reach down and grab the gun, which she then wedges between the driver’s seat and the center console. Jace clearly watches her do it.

Jenelle calls her husband David Eason as she continues to drive down the dirt road towards the man’s house.

Jenelle decides to leave, but while backing up, she hits the man’s mailbox by accident. (In the scene it does appear to be an accident.) The man then pulls out onto the road in front of Jenelle and boxes her in. She begins to panic as she continues to frantically update David via speaker phone while repeatedly going forwards and backwards in an attempt to get turned around.

The two vehicles collide and Jenelle yells to David: “Dude! He just hit my car!” The screen turns to black as we hear Jenelle scream at the man: “Dude! Leave me alone!” Viewers are shown text that reads: “At this point, Jenelle pulled out her firearm.”

She is eventually able to clear the white pickup and begins to head back down the dirt road towards the highway with the man in the pickup following her. The man continues to follow Jenelle once she gets on the highway, but before too long he abandons the chase.

Jenelle fills David in on what happened via speaker phone and he seems incredulous that she followed the man. “You don’t follow a grown man to his f**king house!” David says sternly.

Jenelle seems frustrated by the lack of support from David and she hangs up on him. She then calls her Executive Producer Kristen. While talking with Kristen, Jenelle is pulled over by a state trooper. Jenelle seemed to expect to be pulled over, which makes sense given that both she and the man had called 911 — and I’m sure the man indicated that Jenelle pulled a gun on him.

The adrenaline begins to subside and Jenelle is basically in tears as she rolls down the window for the police officer.

The officer asks how she is doing, etc. before noticing the gun and telling Jenelle calmly: “I see your pistol. Just do me a favor and don’t grab a hold of it.”

Jenelle says “No no no no no no” compliantly as the conversation continues. Jenelle attempts to tell the officer everything that happened, but it is clear that she is on the verge of losing it.

I’m not sure if it was simply a tactic to get Jenelle out of the vehicle or not, but the officer asks her: “Would you mind stepping out and showing me any damage?” He mentions something about noticing damage to her lights before he addresses Jace: “Hey buddy, we’re just gonna step out for a minute. Everything’s OK.”

Jenelle exits the SUV and she and the officer make their way to the back of the vehicle. We then see Jace completely alone with the gun in plain sight. The scene fades.

When we return to the scene at the end of the episode, it is from the vantage point of a camera in the median of the divided highway and it is clear that there are people on Jace’s side of the vehicle. I assume that this is the MTV crew that arrived after Jenelle called Kristen, but it is unclear how long it was before they arrived — or how long Jace was left alone in the vehicle with the gun.

I’m like most internet commenters in that I do not know what the proper procedure is for a police officer in this situation, but this just didn’t seem right. This suspect (Jenelle) just followed another person home in a fit of road rage and pulled a gun on him. It can be argued that there was more to it than that, but certainly the police officer couldn’t have been certain of any thing more than that at that point.

So do you really leave an eight-year-old child with a loaded weapon (you would have to assume it is loaded) as you escort his mother away? For all the child knows you are about to arrest her — which would make sense given what he just witnessed. I don’t know — the whole thing made me just as uneasy as it did many other viewers currently talking about the episode online.

The debate was also brought up by Chelsea DeBoer’s dad Dr. Randy Houska on Twitter and Chelsea chimed in as well: 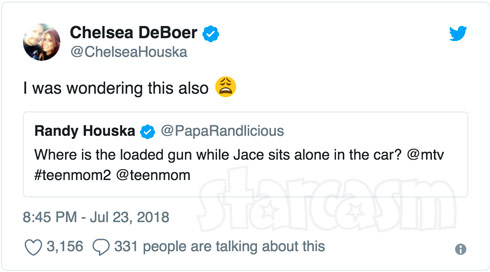 What are your thoughts? Should the officer have handled things differently? And would the scene have been completely different if Jenelle wasn’t a white woman?