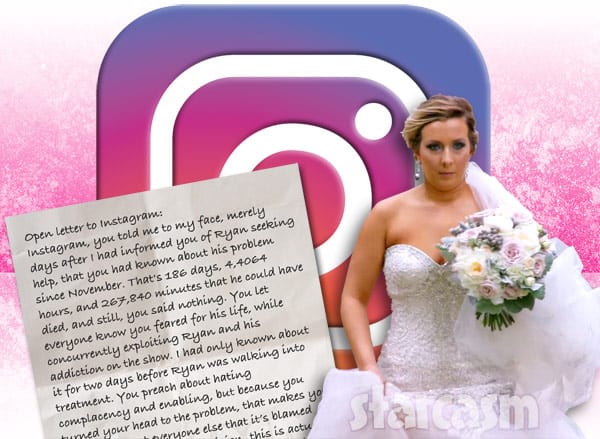 Ever since news broke that Teen Mom OG dad Ryan Edwards was arrested in March on charges stemming from an unknown heroin bust a year earlier, he and pregnant wife Mackenzie Edwards have all but vanished from social media. (Ryan’s Heinz ketchup commercial doesn’t count.) It appears that Mackenzie’s exit from Instagram is now official as her wedding photographer has taken control of it — and Mackenzie’s 250k followers!

Mackenzie’s Instagram account now belongs to Christan C. George, and the photographer shared the announcement with this introductory message in her story:

My name is Christan and I am a celebrity photographer based out of Chattanooga Tennessee!

I have had the honor of working with four celebrities with some of my favorites to be photographed over the next few weeks JAKE OWEN and Jack and Jack. You may have discovered, but this was once Mackenzie Edwards account. She is one of my clients turned friends! She offered me her account when she decided to delete it. While I already have a successful business with over 4200 followers @photochristanlcooper this was an opportunity for me to reach more people with my art and an absolute blessing from Jesus.

I completely understand if you are no longer interested in this content ✨ but I wanted to go ahead and let you guys in.

One of the nine photos uploaded to the account features a five-month pregnant Mackenzie Edwards frolicking on an inflatable swan named Juan:

Just out of curiosity, I checked Christan’s original Instagram account and found another photo from the Mack ‘n’ Juan session:

In the caption, Christan teased more photos from the shoot, but also seemed to reveal a new career path for Mackenzie? Here’s the caption:

Juan The Swan and Domingo The Flamingo sessions about to come your way.
.
.
Mackenzie is one of the most selfless/loyal humans I know. As our friendship has grown so has my understanding of the illusion of “reality TV.” Her friendship has been beyond a blessing ??♥️ I’ll shout it from the rooftops. SideNote: if you need some insurance, hit this girl up.

So Mackenzie is selling insurance now? Ooooooo — I’ve got a great marketing concept: She should call her business Mackenzurance!

Christan stating that Mackenzie is five months along lines up with reports that she is due in October. Hopefully, the additional photos in the shoot will feature her bikini baby bump a little better.

Meanwhile, Christan makes no mention of Ryan at all.

On, and just in case you had the brilliant idea of snatching up Mackenzie’s old Instagram name @mack.edwards21, you’re too late. It’s already being run by someone who named it “McWhorter Babes” and is using a two headed pig as a profile picture.