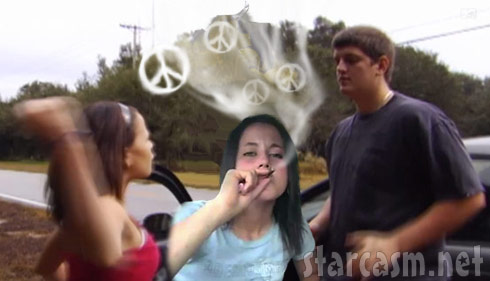 Perhaps Jenelle Evans’ recent visit to a Buddhist monastery had an impact after all because the troubled Teen Mom 2 star has taken it upon herself to bring peace and harmony to the escalating feud between 16 and Pregnant‘s Jennifer Del Rio and Josh Smith! No, she didn’t offer Jennifer and Josh a hit off her peace bong, but she did talk with both of them and offered up her summary of the two sides of the story via Facebook.

speaking to Josh on fb about what happened on this weeks episode. i havent even seen it yet. rather get his perspective first then watch it.

so this is what josh had to say “yeah she hit me so i made her get out of mycar… but it was right infront of her community.. then that was bout 6 months agao…but we got back together last month for a month and i found out she was cheetin on me and i told her to leave and never come back…and she hit me while i was putting my son noah in the car…thts the pic of the bloody nose” to clear up his side

Not wanting to be perceived as unfair and unbalanced, Jenelle also recounted Jennifer Del Rio’s side of the story, but according to a post on Jenelle’s wall from Jenn (that commenters and readers have alerted us too, we didn’t actually get to see Jenn’s post on Jenelle’s wall), she never actually spoke with Jenelle. Jennifer’s comment was quickly deleted. Either way, here’s what Jenelle’s interpretation of Jennifer’s side of the story:

1st off Josh was arrested for hitting Jenn on the show . mtv couldnt show it cuz Josh turned off the flip cams in the car but the cops heard everything from the mikes && you can hear him hitting her – you can ask Elana on that one , she was there & already told Jenn she would be a witness in court if she needed her – yes Jenn & Josh got back together but Jenn was also with another guy & Josh knew Jenn was lol . so what happened that day wasssss Jenn told Josh to a job interview with the kids & when she was droping Josh off at home Josh asked if he would keep one of the kids well Jenn had just got back from NY ( she left both boys with him while she was gone ) so she told him she wanted to spend time with them & Josh took Joshua out of his carseat & jenn was trying to get him back & Josh pushed Jenn on the ground & took Joshua inside so Jenn called the cops , Josh came back out with a bloody nose & told Jenn it was her turn to go to jail

I have to hand it to Jenelle here – there is new information here that would seem to answer a lot of questions people have been asking about the incident. One of the main arguments Team Josh has been making is that if he had actually hit Jennifer then the MTV cameras would have shown it. (Which makes sense given MTV’s history of unflinching editing in their reality series. See: Amber Portwood and The Snooki Punch.)

Just to make something clear i never HIT jennifer she lied and told the cops i did.. if i hit her dont you thinkmtv would of showed it… but yetthey dont step in to tell the police officers that…..

Jenn’s story about the camera certainly seems to make sense, especially given that the police did arrest Josh so they must have had some kind of evidence. Lawdy lawd what a mess!

Thus concludes Chapter 7 of the epic tale of Del Rio vs. Smith! Stay tuned for more….

[Ed. note – Perhaps it’s time we bury the hatchet with Jenelle once and for all. What do you say, Jenelle, you want to come be an investigative reporter for starcasm? (Something tells me no one would refuse an interview with you!)]