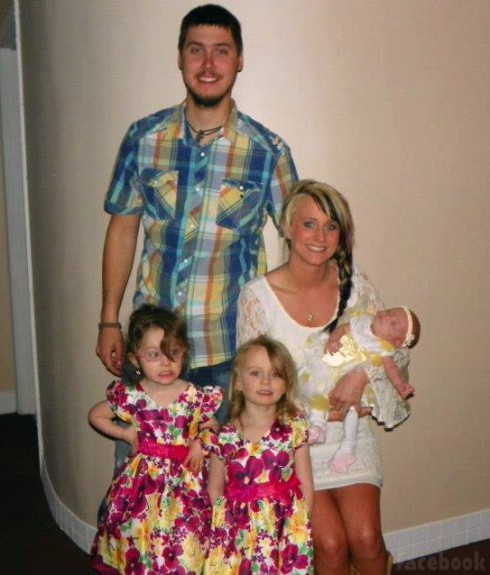 As far as tattoos go, Teen Mom 2 star Leah Messer isn’t exactly in Maci Bookout or Kail Lowry territory quite yet, but she is heading in that direction! Recently, Leah added to her collection — which includes ink on her foot, behind her ear, and on her wrist — with an all new quote tattoo on her back.

“Sometimes you’ve gotta fall before you fly…J.L.C.,” Leah’s tattoo, which was posted to her official Facebook page, reads. As for who J.L.C. is, that would be Leah’s husband of over a year, Jeremy Lynn Calvert. 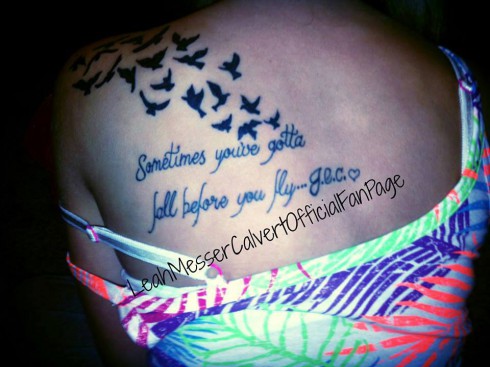 Leah, who welcomed her third child Adalynn Faith Calvert back in February, got what is assumed to be her first tattoo behind her ear with husband Corey Simms in early 2011. Months later, she and the rest of the Teen Mom 2 cast including Kail, Jenelle, and Chelsea, got matching heart tattoos on the insides of their wrists.

Leah also has a tattoo of her daughters’ names on the top of her foot (ouch!) and a bunch of branches on the right side of her back. It is unclear when she got these tattoos.

Leah and the Teen Mom 2 cast is currently waiting to hear about a possible season 5 of the series. While there have been rumors that the show will be cancelled, MTV has yet to announce the future of the show.

Following the season 4 reunion special, Leah had the following message for her fans:

“Thanks so much for all the encouraging words from everyone! I love you guys, and you have no idea how much it means to us and our families!!! I wouldn’t be anything without you all!!! I’ve enjoyed sharing the past few years with you all!”