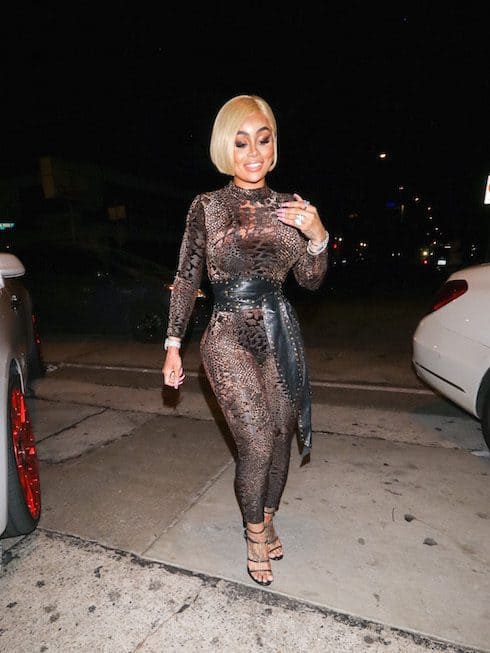 The LAPD paid two visits to Blac Chyna’s house in less than one day, and for a couple of different reasons. Now, allegations of Blac Chyna child neglect — plus the mystery identity of the person who called the police in the first place — have onlookers gossiping about whether Blac’s baby daddy might be involved.

And regardless of whether that gossip is borne out, it’s been a pretty dramatic few days for Blac Chyna. Last week, she got into a fight with Love & Hip Hop star Alexis Skyy at a Hollywood nightclub. It’s since emerged that the fight had something to do with Blac’s ex Rob Kardashian — and later the same night, Alexis shared pics of herself cooking dinner for Rob in Kris Jenner’s kitchen.

Alexis has also since said she “loves” Rob. And Rob and Blac are still embroiled in a custody lawsuit over their two-year-old daughter Dream.

So — having said that, the phantom Blac Chyna child neglect talk got started yesterday afternoon, when it emerged that police had been called to Blac’s house late Sunday night. According to TMZ, who broke the story, “an anonymous person called in…and stated Chyna was drunk at her home,” and “in such bad shape she couldn’t properly care for her daughter.”

When police arrived, however, they found that everything was “fine”: no one was drunk at Blac’s house, and both Blac and Dream’s nanny were at home. And, since there was no crime, there was no police report — meaning no names had to be taken.

Given Blac’s still-boiling feud with Rob Kardashian and Alexis Skyy, initial speculation had the two of them somehow involved. However, just a few hours later, the LAPD arrived at Blac’s house again, this time to accompany a former member of Blac’s glam squad. It seems that earlier in the day (Sunday), Blac and her makeup artist had a “nuclear argument,” one that ended with the makeup artist leaving in a big hurry. She had to go back to retrieve some of her belongings, and decided that it would be best if she were accompanied by police.

It seems *way* more likely that the makeup artist had something to do with the anonymous call to the cops than Rob Kardashian and Alexis Skyy. And it would seem more likely even if Blac and her former employee hadn’t gotten into a huge fight earlier in the day. Custody battles can get nasty, and the one Blac and Rob are in the middle of is just that.

But the Kardashians have serious money, even if Rob doesn’t. They can outlast Blac in a legal battle without launching a single new Kylighter or getting up off the couch. Petty they are, but foolish they are not — especially where public relations are concerned. If it ever came out that Rob or anyone associated with him had a hand in calling the cops to Blac Chyna’s house over what turned out to be phony allegations, no amount of lawyering in the world would win the PR battle.