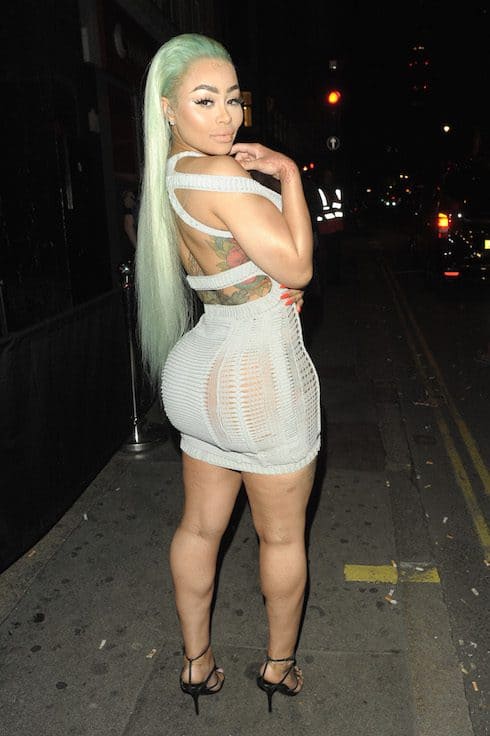 Alexis Skyy and Blac Chyna recently got into a bit of a brawl at a nightclub. And the fight went down in full view of other patrons, so of course there’s video footage from multiple angles. (Plus, it’s not quite been a year since the last time Blac Chyna got into a major public fight.) Evidently, the two women were hanging out together before things went sour; after the in-person spat, Alexis and Blac took to social media, where their brand-new feud continued to burn. And this is before Rob Kardashian got into the mix!

According to several people who claim to have been present — and Alexis’ own post-fight Instagram Live explanation — someone in Chyna’s crew approached Alexis’ table to invite her over to Blac’s section. Alexis obliged, and the two of them had a few drinks together. Then, per Alexis, Chyna stood up unprovoked and shouted “Bitch you gotta get the f*ck up out my section.” When Alexis asked what her deal was, Chyna became angrier — eventually throwing a drink on Alexis and triggering their physical fight.

Here’s a long clip of the end of the fight and the aftermath, via The Shade Room. (The video is broken up into three parts, so make sure you click through.)

#PressPlay: #Roommates, now y’all know we had to get the TEA for y’all! Here’s footage of what went down between #AlexisSkyy and #BlacChyna last night ?? (See earlier post)

And here’s a second clip of the verbal portion of the fight, via the good people at @lnhhfights:

Alexis’ friend Ikey, who was at the club when Alexis Skyy and Blac Chyna went down, corroborated Alexis’ version of events with even more colorful language. “That bitch is a crackhead,” he said on IG, referring to Chyna. “Her mouth was twisted to the side, face was sunken in… & then tried to run & make it seem like we were crazy after throwing a drink & trying to rip Lex top!!!”

(Ikey also said he thought Blac was acting strange and violent because “she JUST LOST custody of BOTH of her kids.” If that’s true, the news hasn’t made it into *any* gossip blogs, reputable or otherwise.)

Shortly after round one of Alexis Skyy and Blac Chyna fight, Alexis struck again by getting Blac’s ex involved. She shared a pic of herself looking rather sultry in Kris Jenner’s kitchen — which is relevant as Rob Kardashian has supposedly been living at Kris’ house for months, thanks to the fall of his sock empire and other recent financial struggles.

Rob also shared a clip of himself and Alexis in the kitchen, without ever mentioning Blac by name. When followers on Twitter started accusing him of either sleeping with Alexis or acting petty toward Blac, Rob tried to plead ignorance on both counts, saying he and Alexis are simply old friends:

Me and Alexis known each other for 5 years so stop with that https://t.co/511P3Os4Iv

No matter the exact reason the Alexis Skyy and Blac Chyna fight went down, all Love & Hip Hop cast members take note. Since VH1 has attempted to put a “No Fighting” rule in place for every show in the franchise, its stars can consider this an alternate way to get that aggression out on camera and draw those helpful social media clicks 😉 (Of course, VH1 isn’t always the strictest when it comes to *enforcing* that rule — but we digress.)