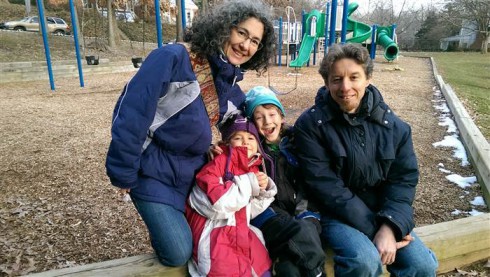 The two children of Maryland parents Danielle and Alexander Meitiv have been taken into custody of Child and Protective Services for the second time in a month after the children, ages 10 and 6, were picked up by the police while walking by themselves Sunday evening.

The couple practice a “free-range” parenting style that encourages children to have autonomy. The Meitivs also believe that we live in a “generally safe” world, and that the police and CPS may be the ones to fear, not random strangers.

“Unfortunately, our first thought was, CPS and police. I never thought they were abducted by a stranger,” Danielle Meitiv said this morning to Today.com. “Our first fear was, ‘Holy cow. Could the police have stopped them?’ I actually had a nightmare about this a month ago, but I didn’t think it would actually happen.”

The children were released back to the parents’ custody after they signed a paper saying they would supervise their children at all times until a later check-up with CPS. This is the second time in four months that the children have been picked up by police for walking around their neighborhood alone.

“The only people who have threatened or abducted my children were the people in CPS and the police, so I do not believe random people are a threat. They were not yesterday, and they’re still not,” she said. “But I signed the safety plan and I’m not going to violate it. I’m certainly not going to risk them taking my kids again. We’re going to have to fight this in a different way.”

The idea of “free range” parenting was popularized by Lenore Skenazy, who wrote a book on the subject. It isn’t just about leaving children unattended (which breaks the law in Maryland and other states,) but more about allowing children to make most of the decisions about how they spend their time and explore their world.

The 12.12.12 Sandy Relief concert was epic with over 2 billion people watching and a million iconic artists!