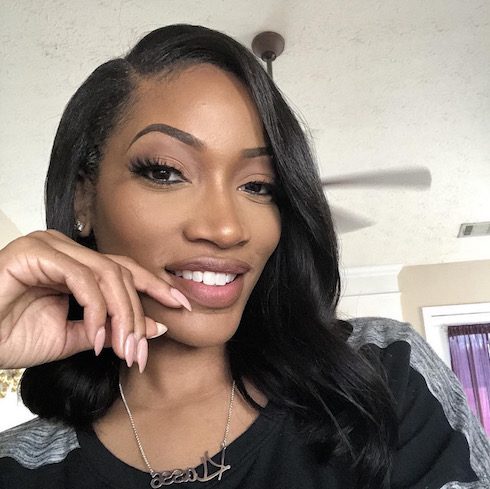 OG LHHATL cast member Erica Dixon is prepping her return to the show for Season 8 in a very big way indeed. She just announced that she’s pregnant with twins (!) and due later this summer! But who is Erica Dixon’s baby daddy? And will we get to meet him ahead of her pregnancy chronicles on Love & Hip Hop Atlanta?

As we reported earlier today, Erica is one of the big confirmed additions to the cast for the LHHATL new season. The show comes back on March 25th, meaning there’s about five weeks to build up anticipation for the premiere. And Erica took to social media to do just that!

Erica actually revealed the news on her long-dormant YouTube channel, which she appears to have revived specifically for pregnancy-related purposes. Here’s the short & sweet reveal video, entitled simply, “Surprise!”

“Not only am I pregnant,” Erica said, “I’m pregnant with identical twins. Right now I am exactly fifteen weeks….I’m not nauseous, not fatigued, I feel like myself.”

As for what she’s having, Erica didn’t say. But she did share what she wants: “I am hoping for boys, because I don’t think I can deal with some girls. At the same time, like, I have Emani, and trust me — she is enough.” (In case you missed it, or have forgotten: Erica co-parents her Emani-year-old daughter with her former & now current-again LHHATL co-star Lil Scrappy.)

Erica also promised her fans monthly updated blog posts throughout her pregnancy. And “at least twice a month” she’ll try to offer unrelated updates with “something interesting.” Here’s something interesting for the time being: If Erica is now sixteen weeks pregnant (the video is a week old), her due date is approximately the end of July or the beginning of August — in other words, right when Love & Hip Hop Atlanta will be wrapping up its new season 🙂

Erica also recently shared some baby bump and gender reveal party pics on Instagram. It seems she held the gender reveal party some time ago, but the friends and family in attendance managed to keep everything a secret until Erica’s official reveal (and have still kept the gender a secret). That’s almost as impressive as getting pregnant with twins while on birth control.

Blessed beyond what I deserve. ?? Thank you all for keeping this private until we were ready to share. Thank you to @hopedahairologist who set up an amazing reveal and my closest friends and family who have been on this journey with me. The love and support has been more than appreciated. This has been a difficult yet rewarding journey for me with the sickness and scares but we’ve conquered and will continue to. Prayers up and if you want to follow my journey or more details click the link in my bio. ?? #Maybabiesontheway

But who *is* Erica Dixon’s baby daddy? No one is saying — least of all Erica herself. In fact, she practically clapped back on a fan who asked her about her baby daddy’s identity on Instagram. When the fan wrote “Baby daddy tho?”, Erica’s response was swift:

Non of your business. You’ll know [when] i want you to hun but everyone is good, healthy, and happy. Hope the same is for you….Everyone is free to ask whatever questions they want, just doesn’t mean they are going to get the answer they are looking for. If you followed me from the start, you would know that i’m one of the few who does not live their entire life out on social media. In the future, when referring to me and my life, please speak on what you know….not what you heard or think. Thanks in advance.

We’ve been hearing gossip that Erica’s baby daddy is an NFL player, but nothing more than that. And we’re pretty sure it’s *not* Erica’s former boyfriend and NFL player William Gay, who just got engaged to Olympic athlete Natasha Hastings.

When is Kate Middleton and Prince William’s baby due?