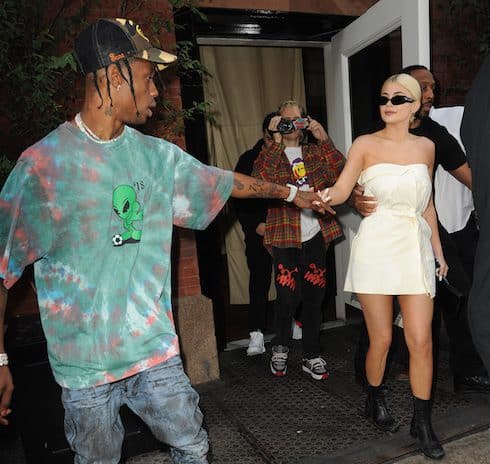 Travis Scott, who’s been linked to plenty of rumors about a secret marriage to Kylie Jenner since Stormi’s birth, has been talking up his “need” to marry Kylie more and more of late. And in a total non-coincidence, the juiciest bit of marriage gossip dropped on the exact same day that Travis just announced he’ll be the second performer at the Super Bowl halftime show next year. So of course the latest gossip indicates a major spectacle during the show: namely, Travis Scott proposing to Kylie while onstage.

If you’re thinking this type of story sounds weirdly familiar, you’re right. Our favorite bit of Kardashian gossip this year was the allegation that Khloe was going to induce labor in the middle of the NBA All-Star Game (though presumably not while attending the game itself). So, in a weird way, there’s actually precedent for this sort of Kardashian fantasy-spectacle.

News of Travis agreeing to appear alongside Maroon 5 at the Super Bowl LII halftime show in Atlanta broke just a couple of hours ago. According to TMZ‘s piping hot take, Kylie will definitely be with her baby daddy at the show: “his plus one will be the mother of his child…and one of the biggest and richest celebs on the planet…Kylie Jenner.”

That item wouldn’t be too much of an eyebrow-raiser by itself. But Travis’ shiny new Rolling Stone cover story went up no more than an hour or so before the news he’d accepted the Super Bowl’s offer. And that cover story contains the clearest indication yet that Travis Scott proposing to Kylie Jenner in *some* dramatic fashion is a matter not of if, but when.

Religious faith is one of the things Scott and Kylie Jenner have in common. “We both believe in God,” [Scott] says, and so, when she told him she was pregnant, “we felt like, ‘This is something special.’ And kids are something we kind of talked about when we were getting busy.” He describes their bond as rock-solid, the speed of their courtship notwithstanding. At first, Scott says, “we was just two kids, f*cking around. Maybe, like, the first week, you don’t know if it’s real or a fling. Then the second week you’re like, ‘Whoa, I’m still talking to her, she’s responding, I’m responding. We ain’t run out of a thing to say.’ And it got to a point where I was like, ‘I need her with me to operate. She’s that one.’ ” He adds, “We’ll get married soon. I just gotta sturdy up — I gotta propose in a fire way.”

So, if you’re as media-savvy and -hungry as the Kardashians, and you’re looking to replicate the success of having three daughters pregnant at the same time, what do you do? You could go back to that well and arrange a double pregnancy (something that’s already said to be in the works). Or you could take advantage of your direct connection to the most widely watched television event in the country and engineer a surprise to make Justin Timberlake and that kid on his phone the distant memory it should be. Frankly, if Travis doesn’t propose to Kylie while onstage at the Super Bowl, we should all take it as a sign that the momager is slowing down.

Kylie Jenner and Tyga: She ‘gives him the benefit of the doubt’ in controversy with 14-year-old girl