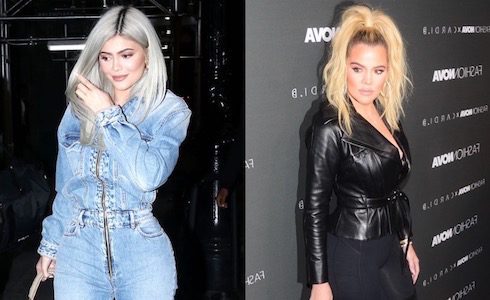 Months of anonymous gossip about the possibility of Kylie and Khloe pregnant again have culminated in a grand report alleging that the two of them are considering an encore performance of their 2017-18 double pregnancy. Kris Jenner’s fingerprints are all over this — and her true plan almost certainly involves a third daughter. But here’s what we know so far.

First of all, billionaire Kylie Jenner is settling nicely into domestic life. She’s supposedly been thinking and talking about having another baby for months, almost since Stormi’s birth itself. She’s also said to have been planning a $10 million wedding to Travis Scott for the better part of a year. And her recent Stormi-heavy social media activity means Kylie’s gotten over the jitters associated with the kidnap threats of this past summer.

Khloe Kardashian, for her part, is allegedly totally ready for a second baby by Tristan Thompson. She and Tristan have been in couples therapy for months, are believed to be working through their trust issues stemming from his multiple infidelities, and are even supposed to have resumed their own wedding planning.

So the stage was set for an article like the one ET recently published, in which an anonymous insider claimed that Kylie and Khloe pregnant again is all but a foregone conclusion.

For starters, the insider said, Khloe had such “a difficult journey” getting pregnant with True that she “doesn’t want to delay trying.” Khloe is “not putting any pressure on herself” — but she’s also “not not trying.” (Which is just an unnecessarily coy way of saying she’s sleeping with Tristan.)

Meanwhile, Kylie and Travis have their start date circled in ink. The two are “going to wait until he’s finished his [current] tour before trying for another baby.” This is something they “want [to do] soon” — the baby, not the trying — “so it’s close in age to Stormi.”

The article notes that Travis’ 2018 tour ends on December 22 in Portland OR. And he appears to have no dates scheduled for 2019.

But here’s where Kris really overplays her hand. The anonymous insider doesn’t mention money or TV rights or Keeping Up With The Kardashians once — apparently, this whole double pregnancy is all about family:

Kylie and Khloe would love to be pregnant together again. And it seems like the timing could work out that way. It was a real bonding experience for them, but more importantly, it’s been amazing for their daughters to be so close in age. There are so many kids/grandkids in that family, that’s really where the family’s attention is. It’s all about the next generation.

Khloe did call her and Kylie’s first dual pregnancy a “magical ride” earlier this year. So it’s easy enough to believe that the two of them would share the experience again.

But maybe the family’s real motivation is even more dynastic — Game of Thrones-ian, you might say — than it’s ever been. The Kardashians have been rich for years; now, with the ascent of Kylie and Kim and Kanye and their brand in general, they’re legit wealthy. Kris needs to surround herself with as many blood grandchildren as possible to ensure the family’s wealth endures. She’s probably counting her blessings that it didn’t work out when she encouraged Scott Disick to get Sofia Richie pregnant for KUWTK glory, and doing everything she can to ensure he doesn’t do so now.