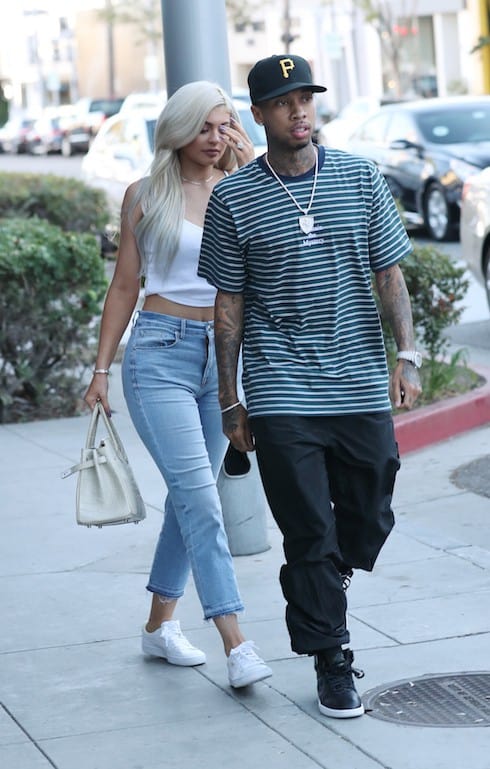 Kylie and Tyga, like the Gilmore Girls, might seem destined to repeat the same mistakes indefinitely. According to the tabloids responsible for speculating upon their every move, they’ve been close to broken up or secretly pregnant as often as Lorelai and Emily fight. There was the top-secret summer wedding they allegedly threw for themselves, so they could tie the knot before Rob and Chyna did so. This fall, Tyga and Blac Chyna’s son King Cairo appeared to drop the news of Kylie’s pregnancy while all hopped up on sugar and good vibes at his fourth birthday party. And just last week, the story was that Tyga got down on one knee and proposed to Kylie while at a shooting range.

But now, according to a spate of rumors, a new man might be winning over Kylie’s heart–and Tyga might have lost it at the worst possible time. BET appears to have it on good authority that Tyga and 21 Savage are locked in an “all-out war” over Kylie. It seems that 21 Savage has had enough of Tyga’s fumbling, and decided “to step in and claim [Jenner] for his own.” The two young men exchanged barbs on Instagram, forgetting for the moment that the object they know as Kylie Jenner is wealthy enough to buy both of them with money to spare for more of Tyga’s repo troubles.

(However, it is worth pointing out that Savage’s most recent hit, “X“, came out this past summer, giving him the professional leg up on Tyga, whose only genuine hit, “Rack City,” just celebrated its fifth birthday.)

shoutout to my boss b****** wifing niggas

Selling records being you, but still you want to be me

Kylie might be more receptive than usual to such charms, though. At least one shock report claims to have it on good authority that her relationship with Tyga is rockier than ever, thanks to his response following the recent Kylie Jenner pregnancy scare. Tyga “pretty much abandoned” 19-year-old Kylie after hearing the news, per Love & Style‘s dispatch on the drama. Their anonymous insider explained: “[Kylie and Tyga] always talked about having babies together but this was real. While it was exciting [for Kylie], it was really frightening, too….They’d made a pact that if she got pregnant they would get married. Instead, they broke up.”

The indomitable couple quickly got back together after the scare was revealed to be nothing more. And the equally unassailable Gossip Cop cited its own anonymous sources in claiming the whole thing was baloney anyway. So Kylie’s fans are left grasping at gossip, and two twenty-something rappers are having a public feud over a teenager who’s too busy expanding her empire in the form of a new web shop to pay much attention. The Kardashian killer instinct for the bottom line remains strong.