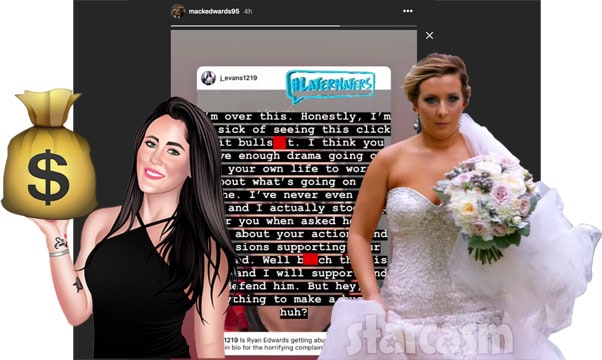 Jenelle shared a sponsored post on Instagram that featured Ryan Edwards’ mug shot photo from his arrest earlier this year. “Is Ryan Edwards getting abused in prison?” the caption reads. “Click the link in bio for the horrifying complaints made against his jail”

“I’m over this,” Mackenzie began her open letter to Jenelle — which she wrote over a screen cap of Jenelles Instagram post. “Honestly, I’m sick of seeing this click bait bullsh*t. I think you have enough drama going on in your own life to worry about what’s going on in mine.”

Mackenzie then reveals that she has actually gone to bat for Jenelle in regards to her controversial husband David Eason, which is indeed a rare thing. “I’ve never even met you and I actually stood up for you when asked how I felt about your actions and decisions supporting your husband. Well b*tch this is mine and I will support and defend him.”

Mackenzie concludes with a bit of snark: “But hey, anything to make a buck, huh?”

In addition to the post that Mackenzie references above, Jenelle also shared a similar post in her Instagram story with a link to the same article. “Is Ryan Edwards being abused in prison?” the ad reads, along with the obligatory “Swipe Up!” suggestion.

The stories link to a Celebuzz article that requires you to scroll through numerous pages paragraph by paragraph before it is revealed that the post is merely a recap of a Radar Online article. The Radar article, over-billed as “Harassment, Cold Food & Inadequate Medical Care! Ryan Edwards’ Jail Hell Exposed!” is a collection of lawsuits filed against the prison where Ryan is currently incarcerated.

The four cited lawsuits include a harassment claim after an officer allegedly told an inmate: “You are sweating. Are you sure nobody is under the blanket sucking on your neck?” The inmate claimed that the comment left him “humiliated, embarrassed and harassed.” The lawsuit was dismissed.

Another prisoner sued because his food was cold. That lawsuit was dismissed.

Lawsuit number three involved a prisoner who claimed that his request for medical attention was ignored and his hand was “permanently damaged” as a result of the “intentional, malicious acts and practices.” That case was dismissed.

The last lawsuit is by a prisoner who claims that he won an appeal and was forced to remain behind bars roughly three weeks past his scheduled release date. “The court hit back claiming he had not paid a filing fee or submitted proper documents,” Radar reveals.

That’s it. That’s the “jail hell” Ryan is supposedly living in.

I despise misleading clickbait articles as much as anyone, but this one seems like an odd one for Mackenzie to finally take a stand against. Even the deceptive part of it doesn’t really say anything bad about Ryan, it just implies that the facility he is staying in might be an abusive one — despite there not really being any actual evidence of that.

Also, if Mackenzie is going to pick a fight with Jenelle over this Ryan prison story, then she had better be prepared to fight an army of cast members from the Teen Mom franchise for sharing similar articles! Here are just some examples from Amber Portwood, Kail Lowry, Briana DeJesus, Cheyenne Floyd, Jade Cline, Kayla Sessler, and Javi Marroquin: 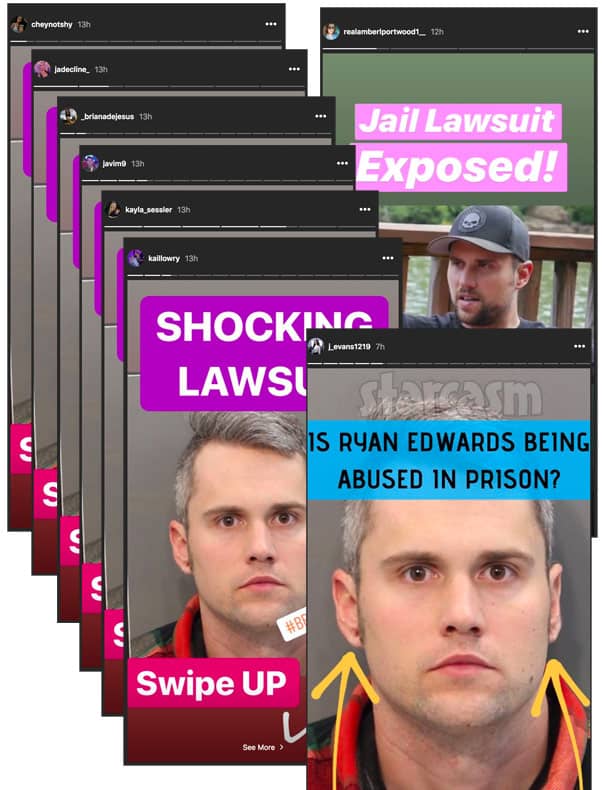 Teen Mom 2 fans will recall that this isn’t the first time Jenelle has ruffled some of her Teen Mom co-stars with clickbait articles. That was at the root of her falling out with Kail Lowry, which is still in place today. Jenelle argued at the time that she was not responsible for what was posted on her social media accounts after a clickbait article called into question the paternity of Kail’s son Lux. Kail did not agree.

Jenelle would later turn the tables on Kail and complain about a series of clickbait articles that Kail posted in regards to David Eason.

Fans may also recall that this isn’t the first time Mackenzie has gone after one of the Teen Mom 2 moms. When Ryan was arrested in March of last year, Kail tweeted that Mackenzie “came in & manipulated a situation to her own benefit. To secure a check. Then went a step further & got pregnant so that when they split, she is set with a couple dollars. But that’s MY OWN opinion.”

Mackenzie responded by calling Kail a “b*tch” and adding that she doesn’t give much weight to “someone who gets knocked up every two seconds by three different people.”

Jenelle has yet to publicly respond to Mackenzie’s open letter.

UPDATE – Jenelle, or at least someone with access to her Twitter account, seems to give Mackenzie the middle finger by tweeting the article along with a message to her:

What does Mack think about this?https://t.co/BB44sOMOZp