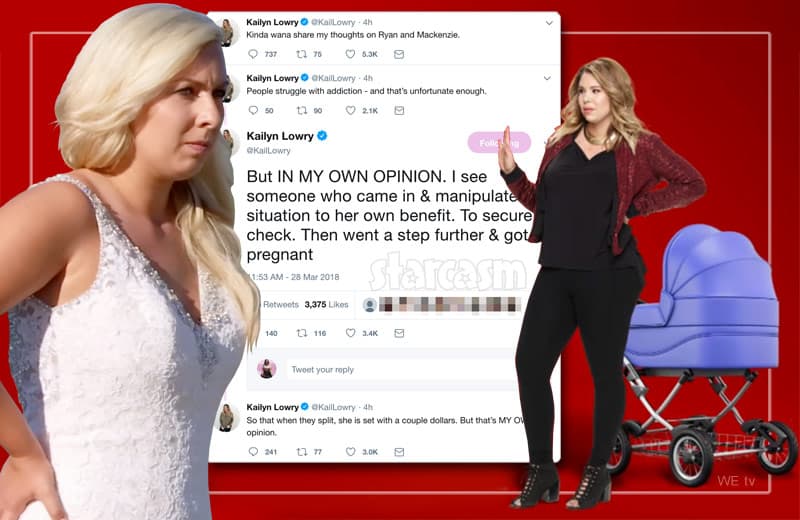 It was revealed earlier today that Teen Mom OG dad Ryan Edwards was arrested in Tennessee on a charge stemming from a previous heroin possession arrest, and Teen Mom 2 star Kail Lowry used the opportunity to offer up her way-less-than-favorable opinion of Ryan’s now pregnant wife Mackenzie Edwards.

Kail’s Mack bashing went down on Twitter, and seemingly started with one of Kail’s trademark subtweets, before getting VERY specific. “That girl trying to secure her bag on someone else’s name,” Kail tweeted after the news broke, adding “Sounds familiar” a minute later.

Then Kail dropped the subtlety and called Mackenzie out by name before sharing how she really felt. “Kinda wana share my thoughts on Ryan and Mackenzie,” Kail tweeted as an intro. Here are the rest of her tweets:

But IN MY OWN OPINION. I see someone who came in & manipulated a situation to her own benefit. To secure a check. Then went a step further & got pregnant

So that when they split, she is set with a couple dollars. But that’s MY OWN opinion.

Something tells me Mackenzie is already working on her Reunion letter to Kail.

UPDATE – Mackenzie has responded to Kail’s tweets by speaking with her buddies at Radar Online. “She’s a b***h… coming from someone who gets knocked up every two seconds by three different people,” Mackenzie said.

UPDATE – In a new video claiming that Ryan Edwards is back on Tinder looking for hookups, The Grace Report also goes in on Mackenzie, and is somehow even more harsh than Kail as she says Mackenzie’s pregnancy is “an eighteen-year plan” and Ryan’s latest arrest is actually a good thing for her. “All of this is only going to help her get primary custody of their child eventually, and gouge him for child support!” Grace says. Click the link for the full video, including more about Mackenzie , as well as the latest Ryan Tinder deets. 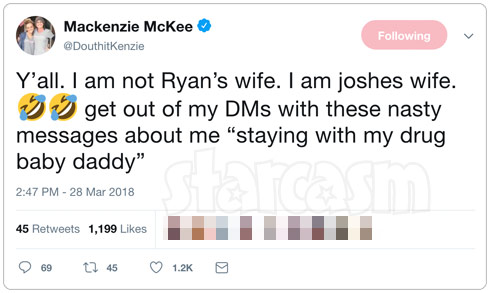 As long as @mjfree keeps paying this man, he will continue to use Drugs. Don’t trust words, even question even actions, but never doubt patterns! #teenmomog Morgan you remind me of The Jigsaw https://t.co/w6tQKbAbdN

It’s time for this shit show to end. You know everything that goes on in their lives. You continue to enable them and cause them to resort to drugs and bribe them to have children they can’t take care of for your own financial gain! #teenmomog

You don’t see the root of the problem. I’ve seen it first hand. You are only a viewer watching a pipe dream every Monday night.

I didn’t say happy or sober. I said he is enabled by Morgan.

Ryan’s drug issues are just the latest controversy for the Teen Mom franchise, and it does raise the question of what the responsibilities of reality show producers really are. I often see fans of the show complaining that the show needs to end because it is no longer accomplishing what it set out to do — which is to tell the stories of struggling teen mothers. That argument never had much weight to me because I don’t believe that is what the Teen Mom shows are about. That is what the 16 and Pregnant episodes are about, to be sure, but the Teen Mom shows are documenting the stories of these particular moms, moms who became international celebrities because they are on a reality show.

Clearly, not all of those stories are going to be positive ones. As a matter of fact, it could easily be argued that the sudden fame and money at such an early age meant that these people had the decks stacked against them. Even so, I feel that we are getting a glimpse of what these folks’ lives are like — which is the point of any reality show. Is it hard to relate to a mother of two with more than a million Twitter followers who makes $300,000 a season on a reality show? Yes. Does that mean their stories shouldn’t be told? Hell no.

But, where is the line? At what point are producers morally obligated to stop documenting the lives of people who are really struggling — perhaps due in large part to the fame and money that they receive from being documented? On one hand, there is the opportunity to really delve into serious human issues, such as Catelynn’s struggles with depression, or the EMMY-worthy scenes of Ryan’s parents Jen and Larry trying to help their son without pushing him away. Even if Ryan’s drug problem has been enabled by his salary and his fame, that doesn’t change anything about how relate-able his addiction struggles (and the struggles of those close to him) are for the hundreds of thousands of people watching.

Of course, the question of whether or not MTV should continue to document Ryan’s story has a very clear answer if he is putting himself or others at risk — as he did while obviously driving high last season.

I also believe that Farrah Abraham’s venture into the adult industry should not have been a reason to stop telling her story. That IS HER STORY. Farrah became famous on 16 and Pregnant and Teen Mom, and then became an international sensation thanks to her staged sex tape. For whatever reason she has ZERO hang ups about her body and sexuality, and as such she has pursued numerous ventures that would make a lot of people uncomfortable — none of which has been illegal I should add. That is Farrah’s story. You may not like it, but it is a pretty damned fascinating story!

I live near Austin and I actually bumped into Farrah while taking another Starcasm writer from out of town to visit Froco for some frozen yogurt. Seeing her in person just reminded me what a CUH-RAZY life this person is living!

If Farrah was a constant pain in the backdoor to work with, then that is an entirely different story. I have ZERO issue with MTV/Viacom firing Farrah if this was the case.

Whoa! This post really went off the rails there! Ummmm…

Boy, how ’bout that Kail, huh? Could this mark a new beginning for the podcast host and potential spin-off series recipient? I don’t think there is any Teen Mom star more famous for subtweeting and not delivering on promised tea — perhaps things have changed now and we will be seeing more of the name dropping, bus throwing underer Kail? If so, she better be careful because those bus tosses go more than both ways. 😉