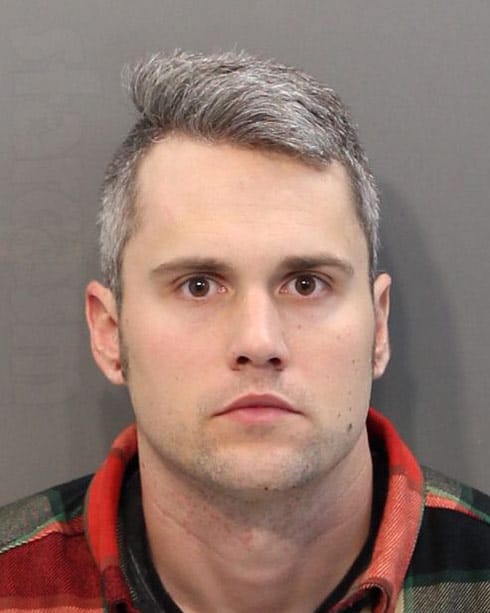 Teen Mom OG dad Ryan Edwards continues to struggle with sobriety even after his recent 90-day stint in rehab. The 33-year-old was arrested on Wednesday stemming from an incident last month in which he ordered six whiskeys at a bar in the middle of the afternoon, and then skipped out without paying his tab.

The details of the incident come from TMZ, who obtained the police report revealing that Ryan “was at Bud’s bar in Hamilton County, Tennessee where he ordered 6 Jack Daniel’s whiskey, raking up a bill of $36 and then walking out without forking over the money.”

Police say that Ryan was at the bar from noon until roughly 4PM. TMZ does not reveal a specific date for the drink ‘n’ dash incident, merely that it “went down last month.” I assume that means December, which would rule out the possibility that Ryan was celebrating his birthday on January 3.

Radar Online spoke with a clerk who “confirmed he was also arrested on a possession of heroin charge out of Red Bank County.” (Note: There is no Red Bank County. Red Bank is a city within Hamilton County.) The site continues: “According to the clerk, a warrant was likely out for his arrest in Red Bank at the time of his arrest. He is being held on no bond for the drug charge.” TMZ also mentioned that Ryan is being held without bond “because of another pending criminal case in a neighboring county.”

I wanted to be careful with this post due to how much confusion there was when when Ryan was arrested for a probation violation back in July. Because Ryan violated his probation, the official charge was listed as “possession of a controlled substance,” which spawned numerous headlines and stories claiming that he was once again caught with drugs — which was not the case. His violation had reactivated the original charge from his 2017 heroin possession arrest.

All indications are that there is a new possession charge against Ryan this time, but the information is so vague that I wanted to be certain it wasn’t Ryan violating his probation again somehow, reactivating his original possession charge. (I know that Ryan was scheduled to be off of probation just before his previous violation, but I do not know if the violation extended the probation period.)

Regardless of whether the possession charge is new or old, Ryan will have separate court dates for that and the drink ‘n’ dash. His court date for the drug charge is January 28, and the court date for “theft of services under $1,000” is set for February 6.

So far, there has been no reaction on social media or via statement by Ryan’s wife Mackenzie or his parents Larry and Jenn.

UPDATE – It seems I was right to be hesitant on the heroin possession charge. The Hamilton County Sheriff’s Office has issued a statement clarifying that it was a probation violation from Ryan’s previous charge. Here is the full statement:

On January 23, 2019, Ryan Edwards was reporting to Hamilton County Probation Office at which time he was arrested due to outstanding warrants. Edwards was on probation for a prior conviction of Simple Possession out of Red Bank, Tennessee.

Hamilton County Probation personnel contacted the Hamilton County Sheriff’s Office Fugitive Division to respond to their location and execute the open warrant for the charge of Theft of Services Under $1000. The Simple Possession (The charge he was on Probation for out of Red Bank, Tennessee) was executed by the Red Bank Police Department.

Edwards was arrested on January 23, 2018 at 2:19 pm by Hamilton County Sheriff’s Office Fugitive Personnel and was booked at the Hamilton County Jail the same day at 4:57 pm.

Edwards remains in the Hamilton County Jail on a no bond after a Petition to Revoke was issued by the Red Bank Court. As noted above, his revocation of probation stems from a prior charge in Red Bank for Simple Possession on March 3, 2017.

Any questions regarding his original charges of March 3, 2017 or the Petition to Revoke should be directed to the City of Red Bank Police Department.

Any questions regarding his new charge of Theft Under $1000 from December 18, 2018 should be directed to the Chattanooga Police Department.

Please note, the Hamilton County Sheriff’s Office’s only involvement in this incident is due to our Fugitive Division, by state constitution, executed the warrant.