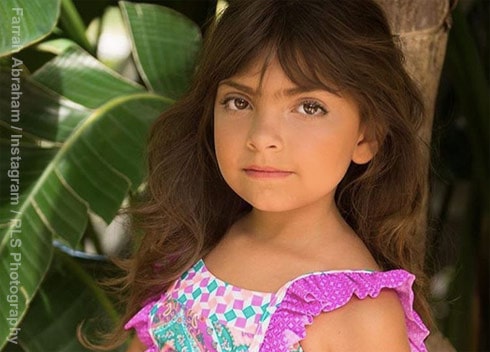 Some recent photo shares by Farrah Abraham of her daughter Sophia modeling in a bikini and make up brought out the full force of the social media parenting police.

Folks complained that Sophia looked too old for her age and that Farrah should be trying to shield her 7-year-old from all the crazy attention that her mom gets via Twitter and Instagram.

A week ago Farrah shared a pic of Sophia from a modeling shoot for Child Model Magazine that seemed innocent enough, but that didn’t stop the anti-Farrah contingent from weighing in:

An example of the negative feedback:

There is one thing if a parent is taking these pictures in a family vacation but Sophia is a little too young to be doing a professional photo session with full makeup and hair !!!! For those who say they have done this when they were a kid and see no issue with it, unfortunately the world we now live in is a scary place with lots is bad people and I’m surprised they anyone with any type is fame, would post pictures of their innocent children on social media!! Not cool!! Protect your child!!

A few days later, the Teen Mom OG star shared some additional pics which got more of the same as far as disapproval of the images and Abraham’s parenting:

In fairness, there were a number of folks who came to the defense of the reality TV star as well:

“Haha why are you all hating on her and her daughter? Let her live her life. She takes care of her daughter better than some of you would ever do!”

Via Sophia’s official Facebook page, a behind-the-scenes video was provided from one of her recent shoots to show the work the younger Abraham put in: