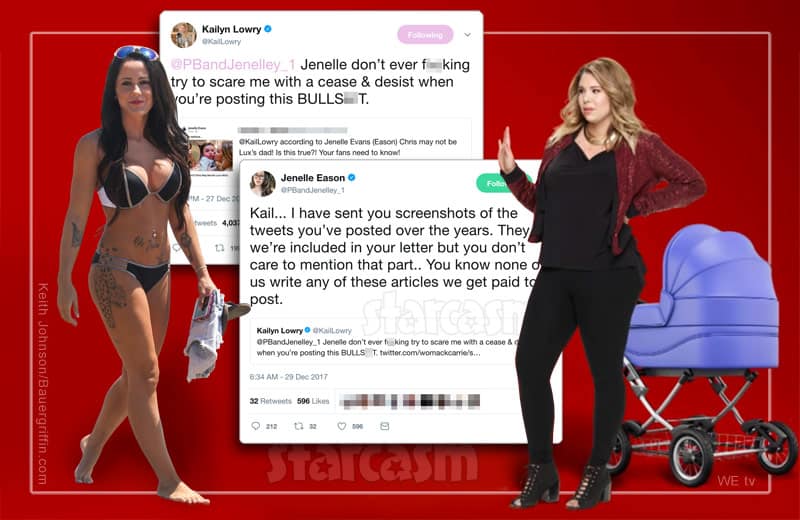 Teen Mom 2 star Jenelle Eason made headlines last month when some of her co-stars (including Kail Lowry, Chelsea Houska, and Dr. Randy Houska) received cease and desist letters demanding that they stop talking about Jenelle on social media. Since that time, Jenelle’s social media accounts have continued to post links to sensationalized clickbait articles about her co-stars, and a recent one questioning the paternity of Lux has Kail SERIOUSLY angry!

The sparks began to fly after someone tweeted at Kailyn to ask her about an article posted by Jenelle on Facebook titled “Daddy Who?! Chris May Not Be Lux’s REAL Father” with the added caption “This is serious…” 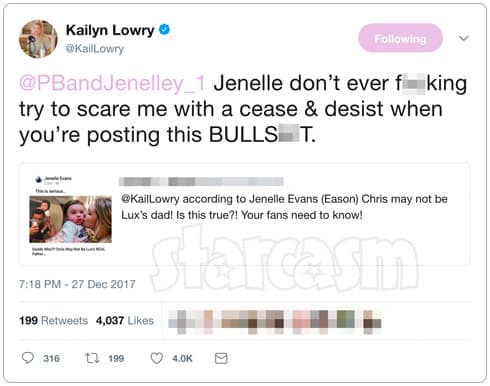 “How do you violate your own cease & desist?” Kail asked in another tweet. One of her followers responded by pointing out that “She said it’s not ‘HER’ posting those articles so it’s allowed ???”

“Ok so how does she send me one for the same thing?” Kail responded. “If it’s not me, why am iiiiiiii getting the c&d?”

At this point, Dr. Randy Houska chimed in on the conversation. “That is so much bullsh!t. ‘I have nothing to do with the stuff posted on my page’ Eff that. Everything that goes on at Houska Dental falls on my shoulders.”

Another account pointed out that the same people that run Jenelle’s social media accounts also post a lot of the same articles (including the Lux paternity post) on social media accounts for other Teen Mom stars like Maci McKinney and Amber Portwood. “Yup, same thing to them, Keep the kids out of it,” Randy replied.

At this point Jenelle joins the Twitter chat session: 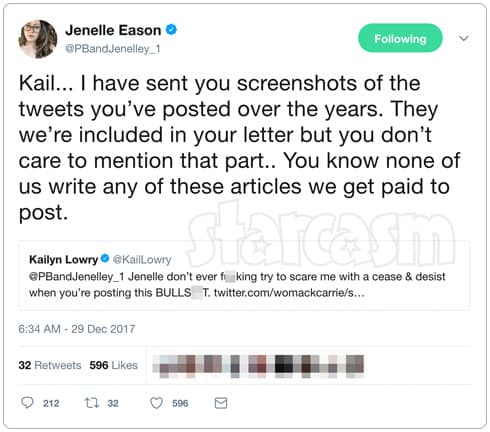 She adds “For you to get on here AGAIN to tweet about some drama goes to show how thirsty you are for attention constantly, you try way too hard. It’s funny.” And then “Like b!tch STFU ??‍♀️”

Kail responds by indicating that her cease and desist letter didn’t include any tweets or additional photos. “I can assure you there was nothing attached to the letter…” Kail tweeted. “But you’re not steering clear if you come on here & respond… lmfao.”

Kail then references the cease and desist letter, which claims that some of the things being said about Jenelle online are making it difficult for her to find a job. “If you have 10+ mugshots do not try to blame me for you not being [able] to secure a job.”

Jenelle claims to have texted Kail examples as well, but Kail doesn’t seem to recall that ever happening. “When?? Lmao you haven’t texted me,” Kail asserts. Jenelle then offered up evidence with this screen capped interaction with Kail:

And that’s where the feud ended…for now.

I’m not usually one to take sides in these kinds of online wrestling matches, but I totally agree with Kail and Randy in that Jenelle IS responsible for the articles that are posted to her official verified social media accounts. Just like Randy stated, if the Starcasm Facebook page and Twitter accounts started posting links to horrible crap then we would take responsibility for it — unless we were hacked or something. (Even then we would apologize and explain.) I will take it one step further by saying WE DO take responsibility in that we HAVE been offered those clickbait link partnership deals and have always turned them down. I’m not saying Jenelle (or Maci, or Amber, or whoever) shouldn’t seize the opportunity to make a little extra money, but they should take responsibility for that decision — which is their decision to make. If Jenelle really has no say in what is posted on her page, then she should have the “official” check mark removed. Actually, she may be in danger of that happening anyway with what she has said already. (I’m not sure how all that works because we’ve never been “verified” lol.)

As far as avoiding sensationalist articles about the children on the shows, I totally agree. But I guess trying to impose any sort of limits on outside-the-lines clickbait articles is inherently a doomed objective by definition. The solution is — and will always be — to not click on them. That’s not going to happen, but that is the only solution.

From an entirely selfish perspective, I TOTALLY agree with The Ashley, who responded to this feud on Twitter by writing “I hate these clickbait articles. They make The Ashley’s job so much harder.” Amen sister!

Oh, if you are curious to see one of the actual cease and desist letters sent out by Jenelle, just click the link in this sentence!

Are Teen Mom’s Kailyn and Javi headed to couples’ counseling?