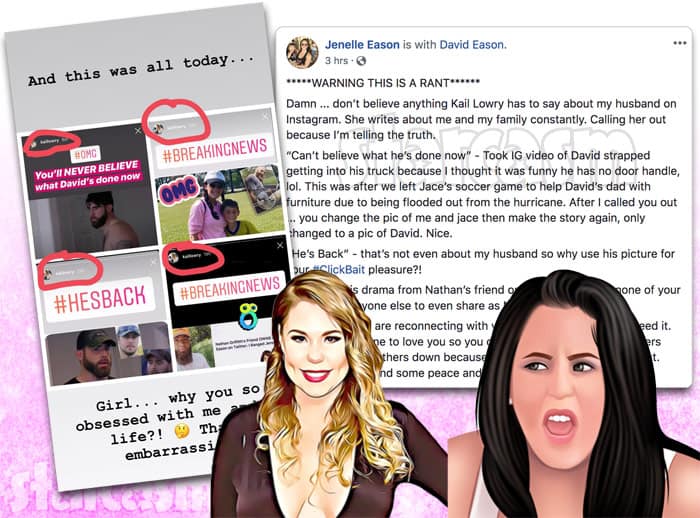 The bitter feud between Teen Mom 2 co-stars Jenelle Eason and Kail Lowry has been reignited, and it is once again over clickbait articles being shared on social media. The latest tiff between the two comes after Kail posted a series of articles about Jenelle and her husband David Eason with sensational titles like “Jenelle Evans’ husband David Appears To Bring Gun To Stepson Jace’s Soccer Game” and “Nathan Griffith’s Friend OWNS David Eason on Twitter: I Banged Jenelle, Bruh!”

Jenelle screen capped four of the posts from Kail’s Instagram stream and pointed out “And this was all today…” before adding: “Girl… why you so obsessed with me and my life?! ? That’s embarrassing.”

Jenelle followed up that post with another messages for Kail:

Damn Kail when the f**k you going to stop writing about me an my family?!

Don’t get mad when the same happen to you…

Jenelle then shared another text-only post in which she explains that the video showing David with a gun holstered at his side was not taken at Jace’s soccer game, but was instead taken when David brought his gun along to help his dad “move furniture out due to Hurricane Florence.”

If you’re DYING to know, Kail and MEDIA OUTLETS, that IG video taken of David was when we were helping Davids father move furniture out due to Hurricane Florence.

Way to be a cold hearted b*tches. Write about something REAL for a change, but you wouldn’t know.

That wasn’t the end of Jenelle’s social media self defense session, however, as she took to Facebook to address the clickbait issue at length:

Damn … don’t believe anything Kail Lowry has to say about my husband on Instagram. She writes about me and my family constantly. Calling her out because I’m telling the truth.

“Can’t believe what he’s done now” – Took IG video of David strapped getting into his truck because I thought it was funny he has no door handle, lol. This was after we left Jace’s soccer game to help David’s dad with furniture due to being flooded out from the hurricane. After I called you out … you change the pic of me and jace then make the story again, only changed to a pic of David. Nice.

“He’s Back” – that’s not even about my husband so why use his picture for your #ClickBait pleasure?!

The last pic is drama from Nathan’s friend on twitter, but again none of your business or anyone else to even share as NEWS.

I really hope you are reconnecting with your mom cuz you f**king need it. You need someone to love you so you can stop fantasizing about others lives and putting others down because you don’t have the life you want. Sorry. Hope you find some peace and happiness. ??

Jenelle posted side-by-side photos in which you can see that the photo of Jace was taken in Southport, North Carolina, while the video of strapped David was taken in Varnamtown: 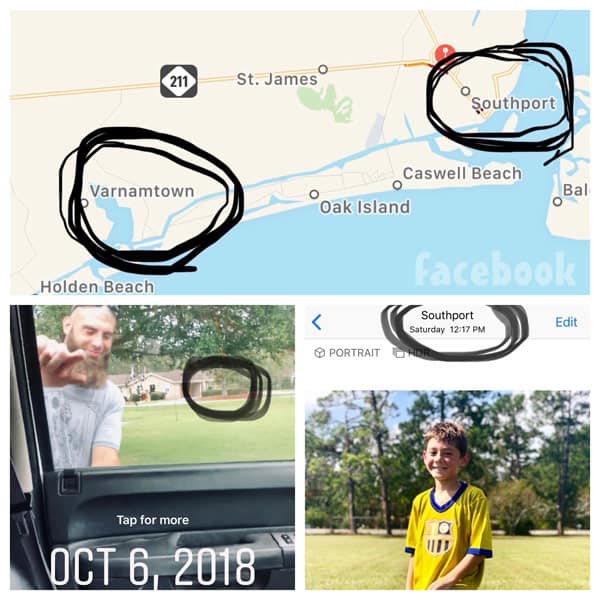 “Varnamtown Town Hall sign in the background of David,” Jenelle captioned the images. “Picture I took of Jace was in Southport.”

David shared Jenelle’s photographic evidence on his Facebook page and added a personal message to Kail (I assume): “You talk so much sh*t I dont know whether to offer you a breath mint or toilet paper…?”

Meanwhile, Kail has remained mostly silent about Jenelle’s angry outbursts directed at her. One Twitter user gave her a heads up about Jenelle’s posts, but Kail replied by simply tweeting: “She’s weird.”

As vague as Kail’s response was, I think I have to agree. I fully understand Jenelle’s anger over all of these clickbait articles being shared by Kail, but her anger seems misdirected at best.

Number one, Jenelle expresses her anger numerous times at Kail for writing these articles, and for being the one who chose the photos used in the ads. That’s ridiculous. Kail doesn’t write these articles, and she certainly doesn’t create the ads — and Jenelle knows that. In their previous heated exchange over clickbait articles in which the roles were reversed, Jenelle tweeted: “You know none of us write any of these articles we get paid to post.”

Number two, it’s not like Kail is obsessed with Jenelle, it’s the company in charge of handling her sponsored links. (And, of course, all the millions of people who want to click on sensationalized Jenelle articles.) It’s the same company that handles “clickbait” for numerous other celebrities, including other Teen Mom, Teen Mom 2, and Teen Mom: Young and Pregnant stars. Here are some of the exact same Jenelle articles as shared by other Teen Mom stars like Maci McKinney, Brianna DeJesus, and Jade Cline — none of which did Jenelle accuse of being obsessed with her: 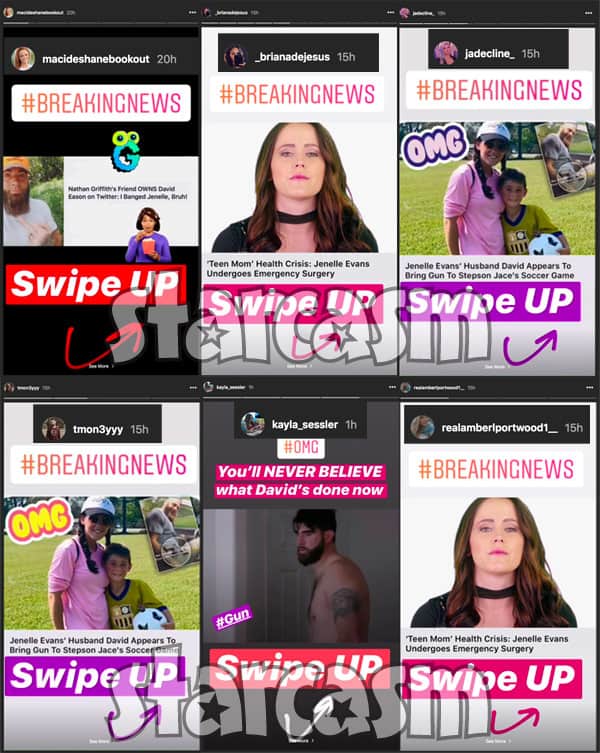 I should also point out that the reason Kail was upset at Jenelle for sharing clickbait articles was because Jenelle had sent her (and other cast members and media outlets) a cease and desist letter demanding that they stop talking about her online. Plus, I think Kail was a little extra incensed because the particular article that set her off was calling the paternity of her son Lux into question.

In Jenelle’s defense, these articles are sometimes rather ridiculous and often not well researched and/or fact checked. “David Eason sparked controversy yet again after he seemingly brought a gun to his stepson Jace’s soccer game,” reads one article, with the only connection being that the photo and the video were posted on the same day.

If you had a lot of time to kill and were willing to click through the seemingly endless string of gallery entries on the post about a friend of Nathan (Ryan Dolph) who “OWNS David Eason on Twitter: I Banged Jenelle Bruh!” you will have discovered that Ryan never actually said he “banged” Jenelle — or even that he had sex with her. He merely tweeted “ask your wife how gay I am she’ll tell ya” and “ur girl knows me better then you think.”

So what’s your take on the latest feud between Jenelle and Kail? Putting aside your opinions on the two of them (and David — if that’s possible), do you think it is wrong or at least distasteful for them to share sensationalized and sometimes factually inaccurate articles about each other for money?

VIDEO Kail Lowry reveals why she and Javi split up