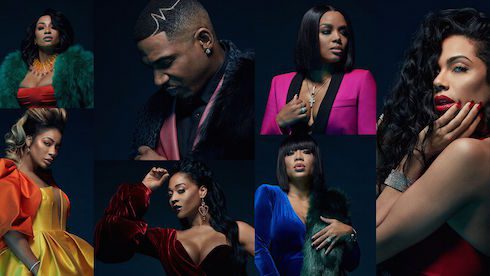 Love & Hip Hop Atlanta is back and reinventing itself in a major way for its new season. The show just dropped the latest supertrailer, confirming many storylines we’ve known about for months 😉 We’ve got plenty of tea on the complete LHHATL Season 8 cast, plus an extended look at what else to expect when the season premiere drops next week.

For starters, here’s the five-and-a-half minute supertrailer in full. We’ll follow that up with a breakdown-slash-checklist of all the now-confirmed gossip, including a few major pieces of news:

In no particular order, then:

-No, Stevie J was not fired from the show for allegedly assaulting Erica Mena (though he’s said to have come close). Instead, the OG cast member, who also avoided jail time in his $1.3 million paternity lawsuit, got surprise married to Faith Evans and moved out west.

We’re also hearing that his inclusion in the LHHATL Season 8 cast may be the last for Stevie in Atlanta. He’s rumored to be in talks with producers about joining Love & Hip Hop Hollywood.

-Spice, fed up with the music industry’s double standards about skin color, bleaches her skin white to prove her point. It looks like this move will have far-reaching implications throughout Love & Hip Hop Atlanta Season 8, as multiple cast members discuss race and business á la LHHMiami.

-Rasheeda has her hands full accepting Kannon and encouraging Kirk to be a good father. And she may not be done juggling. According to recent reports, Kirk currently has two women pregnant, one of whom is yet another side piece. Baby Kannon could be getting a baby sibling this season or next…

-Karlie Redd got engaged to Arkansas Mo on the DL. The two had their share of breakup rumors last summer — fueled in part by the allegations that Karlie may have cheated (and that Mo may have cheated with a stripper).

-Bambi and Scrappy are happy as can be, thanks to the birth of Breland, their first child together. Of course, happiness is no good on reality TV, so we get some spectacular feuding from Momma Dee and Bambi’s mom.

-Scrapp DeLeon is back. We reported over a month ago that Scrapp had been filming scenes as a member of the LHHATL Season 8 cast, following his 2016 incarceration on drug trafficking charges. And Starcasm broke the story about Scrapp’s relocation to a Macon-area halfway house following numerous erroneous reports that he’d been let out of prison several years early. (Scrapp’s current release date is January of 2021.)

Scrapp and Moniece Slaughter are for real (at least for the cameras). We also recently reported that Scrapp and former LHHH star Moniece Slaughter were together. Now, thanks to the LHHATL Season 8 supertrailer, we know that those rumors are true. And this also means that Moniece *will* be a part of the LHHATL Season 8 cast, for at least a few episodes if not full-time.

Unfortunately, Tommie’s complete absence from the supertrailer also appears to confirm that she was indeed fired over her worsening legal situation. Currently, Tommie faces up to 50 years in prison on child neglect and stalking charges.

Of course, we’re pretty sure of a few more LHHATL Season 8 storylines not included in the trailer. Tokyo Vanity is still out there doing her thing, and has a big fight scene with Spice coming up; it’s also possible that her boo Ferrari Tru’s dick vid will make a minor splash in an upcoming episode. Scrapp’s brother Sas DeLeon was recently sought for questioning in an Atlanta homicide; that drama may make its way on screen as well.

New LHHATL Season 8 cast addition Akbar, best-known for beating Tommie up in the studio last year, is set to liven up the musical side of things. Former LHHATL cast member Erica Dixon is set to return, pregnant and with a mystery baby daddy in tow.

Finally, Erica Mena, who on Christmas Eve got engaged to LHHH and LHHNY cast member Safaree, is back in the ATL and allegedly pregnant with Safaree’s baby. So we expect to see Safaree on LHHATL at some point this season, because Mona knows the man is ratings gold.