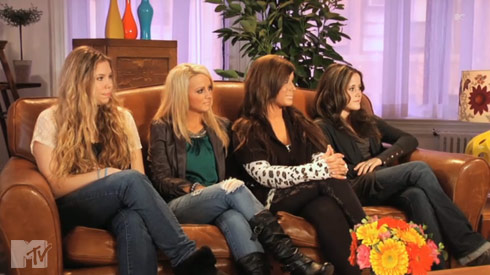 The girls from Teen Mom 2 sat down with MTV’s SunChin Pak to talk about the issues that came up in tonight’s second episode of the first season of the new reality series. In the very small studio audience was a group of teen moms who were able to talk with the girls and ask questions.

In the first part Leah Messer talks about the emotional trauma she went through when the doctor told her that something might be seriously wrong with her daughter Aliannah. Leah talks about trying to find reasons to blame herself for Ali’s medical issues, mentioning that she only weighed 100 pounds when she gave birth to her twins and wondering if maybe she was too small.

Jenelle Evans talks about her issues with her mom and reveals her mom Barbara has never given her any emotional support and she feels as though her mom is trying to replace her with Jace. She also talks about her legal issues and how if she had the money for a good lawyer the custody battle would be a “whole different story.”

Chelsea Houska addresses moving out for the first time and living with her unencumbered best friend as a roommate. She also talks about potentially reconciling with baby daddy Adam, who notoriously treated Chelsea horribly during and immediately after her pregnancy.

Kailyn Lowry’s situation was just as tense as the other girls as she dealt with living with her baby daddy’s parents after breaking up with Jo and wanting to move on and date other people. She also reveals whether she regretted announcing the fact she was dating someone new by changing her relationship status on Facebook. (CLICK HERE to see photos of Kailyn and her new boyfriend Jordan out and about this week in Pennsylvania, and being quite intimate!)