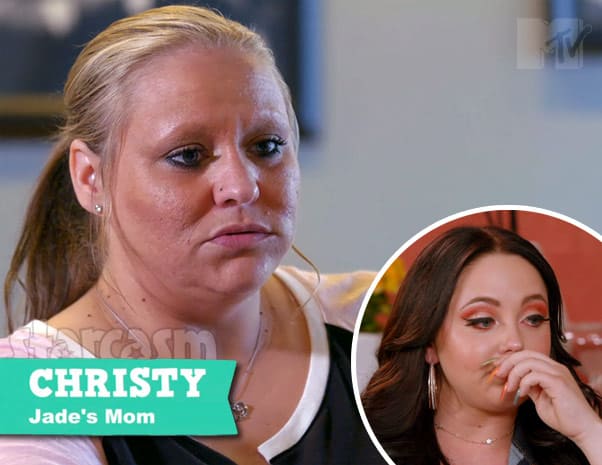 Former Teen Mom: Young and Pregnant star Jade Cline recently confirmed that she will be joining the cast of Teen Mom 2 as Jenelle Eason’s replacement, and it looks like she will have quite the compelling story line for her Teen Mom 2 debut.

During her announcement as part of Kail Lowry’s Coffee Convos podcast this week, Jade revealed that her mom Christy and stepdad Michael were both recently arrested on drug charges. Actually, it was Kail who first made the reveal about Christy.

“There is news that your mom has been arrested?” Kail asked Jade.

“Actually, both of my parents were recently incarcerated,” Jade admitted.

We checked jail and court records and can confirm that Christy and Michael were both arrested on May 9 on drug charges.

Christy is currently facing three charges, including felony possession of meth. The other two charges are misdemeanors for possession of a controlled substance and possession of drug paraphernalia.

It appears that Michael was originally booked with the same three charges as Christy, plus a misdemeanor charge of marijuana possession. However, the felony meth possession charge is no longer listed on his court filing, so he only has the three misdemeanors pending.

Jail records indicate Michael was released on May 14, and Christy was released two days later on May 16. The next scheduled court date for both parties is July 10.

Christy has a long history of drug abuse, and also a long history of run-ins with the law. “They’ve been strung out for so long,” Jade said of Christy and Michael on Coffee Convos. “They’re, like, binge addicts where they’ll binge, and then they’ll be OK.”

Jade then gets very emotional as she talks about the effects that drugs have had on her mother. She also reveals that MTV cameras were apparently rolling when she found about about the arrests.

“My mom isn’t even the woman, like, the strong, beautiful woman that raised me,” Jade said as she began to tear up. “It’s like I look at this hollow shell of, like, a monster that the drugs created. And, they’re filming me, and I sat on the phone and I broke down in the car, and I was, like, ‘I just want my mom back. I want my mommy.'”

PHOTO Jenelle Evans’ father Robert Evans didn’t even know she was on Teen Mom 2, or a mom at all!